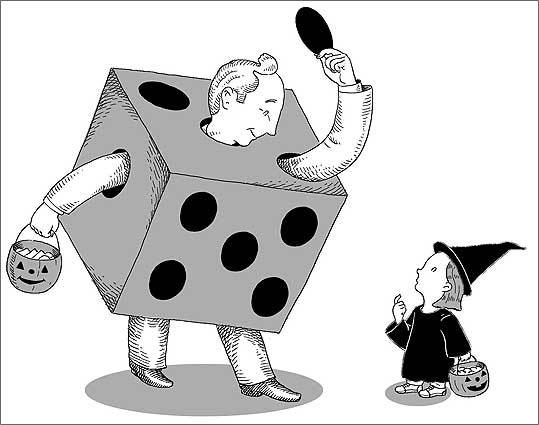 AS YOU GREET trick-or-treaters at the door this Halloween, consider that a child's choice of costume may reveal more than you think. Researchers at Yale conducted an experiment on trick-or-treaters who visited a home in New Haven, Conn. When kids approached the house, they were told that they had to play a game to see if they would win either a large or small candy bar. Two bowls, one covered by a towel and one uncovered, were filled with red and blue markers. The child was asked to pick a bowl (covered or uncovered) and pick a color (red or blue). The researcher then reached in, without looking, and withdrew a marker. If it was the color the child had selected, the prize was a large candy. Children wearing common costumes - defined as a princess, witch, or Spiderman costume - were significantly less likely to opt for the covered bowl, where they couldn't see the mix of markers.

The problem with happy kids

ALL PARENTS WANT their children to be happy, but new research shows that a child in a happy mood may have trouble paying attention. Psychologists induced different moods in children with music or animated videos. The children were then tested to see how well they could locate shapes embedded in complex figures. Children in happy moods performed significantly worse than children in neutral or sad moods. It's believed that happy moods motivate top-down creative thinking but impair detail-oriented analytical thinking.Schnall, S. et al., "A Hidden Cost of Happiness in Children," Developmental Science (September 2008).

"YOU BETTER WATCH what you say about my car. She's real sensitive." Nevertheless, unless you run across a car named Christine, there's nothing to worry about, right? Think again. A study by psychologists at Colorado State University found that almost half of the more than 200 drivers surveyed in a college class had assigned a gender to their car (more females than males) and that over a quarter had given their car a name, including ones like Lolita, the Sweat-box of Death, and Jolly Green Giant. Drivers who had assigned a gender to their car - regardless of whether it was male or female - indicated a greater tendency to driving-related aggression and anger. The students were also asked to assess their car's personality. The personality ascribed to the car was typically somewhat different than the driver's, and knowing this invented personality improved predictions of the driver's aggressiveness.

Why your handshake matters

ACCORDING TO HIS website, New Mexico Governor Bill Richardson set a world record during his 2002 campaign when "he shook 13,392 hands in an 8-hour period - shattering the record that former president Theodore Roosevelt set on inauguration day in 1907." A new study suggests that Governor Richardson may be on to something. To test the effect of handshakes, researchers arranged for college students to interview with local human resources professionals. Before and after the interview, other people - who had been specially trained to rate handshakes - greeted each student and independently rated the student's handshake. Having a highly rated handshake was associated with receiving a more positive assessment from the interviewer, especially for female interviewees.Stewart, G. et al., "Exploring the Handshake in Employment Interviews," Journal of Applied Psychology (September 2008).

IN DEBATES AND interviews, politicians have made "dodging the question" into an art form. Now there's some science to go along with it. Researchers at Harvard Business School set up an online experiment in which people listened or watched as politicians ostensibly responded to debate questions. Politicians were rated just about as well when their answers were slightly off-topic as when their answers were on-topic. On the other hand, politicians whose answers were way off-topic or who did not deliver a smooth answer on-topic were rated significantly lower. The authors compare this effect to the sleight-of-hand of magicians: by misdirecting their attention with an involved answer, the politician can make the audience forget exactly what question was supposed to be answered. But they can't go too far, or the trick is revealed.