What's more alarming than tracking the Dow? Seeing what the insiders see.

IF YOU'VE BEEN watching the stock market for the past few weeks, you might think you've had a pretty good window into the financial crisis. Massive government bailout: Up! Retail sales slump: Down! Fear of global recession: down, down, down.

But you might also wonder why financial leaders got quite so panicked when they did. Stocks have been dropping a lot, true, but they've also had their good days, and it's hard to divine from their jittery movements exactly why the US government would suddenly buy a chunk of all our major banks, or Iceland would collapse, or the secretary of the treasury, one of the most powerful men in the world, would physically drop to one knee to plead for help. Even if he was sort of kidding.

To understand all that, you need to see the world as financial insiders see it. To them, falling stock prices are more a symptom than the main event - the real crisis is unfolding in specific cogs of the world's economic machinery. And to figure out what's happening there, you have to know your indexes.

While the public watches the Dow Jones Industrial Average, experts are watching the TED spread, the VIX, or even the Baltic Dry Index (which just collapsed). Some of these financial indexes have lately emerged to become celebrities in their own right, with cameo appearances on CNBC and economics columns. Much more than any single stock or bond, a financial index has the seductive capacity to boil a whole complex story into a number, a plottable line that tells us crisply where we stand, and - this month - just how out of whack things really are.

The proliferation of indexes also reflects just how intricate the financial markets have grown since the day in 1896 when Charles Dow began adding the stock prices of 12 American industrial companies, dividing the result by 12, and distributing the resulting "industrial average" to his newsletter subscribers on Wall Street. Back then, the market was a scary and unreliable place for investors to put their money, and his new index was one way to discern a measure of order in the numbers, to turn all the noise into a tune you could follow.

Today, indexes are creating, or trying to create, that kind of order in innumerable noisy corners of the vast world of money. And they're birthing their own financial markets, allowing traders to buy and sell bets on the future direction of industries, interest rates, even weather patterns. Creating new indexes has become a business in itself, with an annual awards ceremony, the "Super Bowl of Indexing," followed by a golf outing and a tennis tournament.

The growing reliance on financial indexes betokens a bigger psychological change, too. As economists and financial planners come to agree that collective wisdom exceeds any one person's attempts to run a company, or pick stocks, indexes have at times come to seem more "real" than the unpredictable assets that they track. If you want to invest in America, you no longer buy or - you buy a mutual fund that mirrors the S&P 500 index.

The indexes people are watching right now aren't these investment vehicles, though, but rather unusual little gauges tightly wired to one sector of the economy. And here's the alarming news: For the past month and a half, a number of these key indexes have looked very little like the stock market. They haven't hopped up and down, or gently slumped. What they have done is flown completely off the charts.

A simple number called the TED spread is "at the center of the drama right now," says Alan Marcus, a finance professor at Boston College's business school.

The TED measures the difference, or "spread," between the interest rates on Treasury bills - i.e., how much banks earn by lending money to the government - and the rates banks charge one another, as measured by another index called the LIBOR (don't ask). When the TED spread goes higher, it means that banks are losing trust in one another.

In September, credit froze in the upper reaches of the economy, and "higher" was an understatement for what happened to the TED: the chart went more or less vertical.

Since then, tiny downward ticks in the TED spread have counted as very good news in the financial markets. Two weeks ago, the TED spread finally reversed course and began inching back toward earth.

If there's a single thermometer of Wall Street's fear, this is it. The VIX measures how wildly the market is expected to swing up or down in the near future. When the economy is steady and investors are confident, the VIX is low; when traders are bracing for massive changes, it goes up.

Normally the VIX hovers calmly between the numbers 10 and 30. In the face of truly dramatic events - Russia's 1998 economic collapse, the World Trade Center attacks - the VIX has occasionally hit 40.

During the trading day on Friday, the VIX crossed 89.

"Nobody's ever seen volatility like this," said Albert Neubert, executive director of the Index Business Association, a trade group for financial indexers. "Throw out all the old models."

The VIX is considered a rising star in the world of indexes. There's now a market for VIX options, which means you can buy and sell bets on the idea of volatility itself. At the annual Super Bowl of Indexing, that was named the innovation of the year.

If you've ever wondered what it costs to send a Capesize freighter full of coal from Ecuador to Rotterdam, the Baltic Dry Index is your number. Compiled at a 200-year-old shipping exchange in London, this index tracks prices on the world's largest cargo ships. Bulk freight is the stuff that drives economies at the most basic level - grain, coal, iron ore - so the BDI offers a pretty good proxy for the overall health of global trade. If shipping is expensive, that means nations are hungry for raw materials, and economies are flush.

And if the BDI falls off a cliff, that means - well, we're finding out.

In June the index ramped up as China's appetite for iron pushed the world's supply of gigantic ships to its limit. The dizzying plunge that followed was "a Wile E. Coyote moment," says Harold Malone, an investment banker who tracks shipping at Jefferies & Co in New York. The global demand vanished, but the price hung in the air for a while. "He looks down and suddenly realizes that there's nothing below him, and he falls."

The plunge can't purely be laid at the feet of the banking crisis: A standoff between China and Brazil over the price of iron ore has shut down one of the biggest commodity trading relationships in the world. But frozen money is a big part of the story here, too. Shippers around the world rely on old-fashioned letters of credit to ensure payment, and banks just aren't issuing them right now. Without that guarantee, no exporter in his right mind would load 90,000 tons of coal onto a ship and send it to another continent.

All companies need cash to do business, and they can easily raise it with short-term debt called "commercial paper." The discount rate spread measures the difference in risk-worthiness between paper from America's most solid companies and paper from its less-solid ones.

Like the TED spread, the difference is normally pretty small, because nobody expects companies, good or bad, to fail on short notice. In mid-September, a yawning gulf opened between those two groups. Suddenly the lower-rated companies couldn't get credit. "Anything that's not absolutely top-rated is essentially dead in the water," says BC's Marcus.

Commercial paper is one of those immense, crucial markets that functioned in almost total obscurity until it ground to a halt this fall. Marcus says the sudden emergence of these stories has been humbling, even for professional economists and finance professors.

"Now all the sudden, you kind of see all of the nuts and bolts that make the markets work," he says. "And you realize, A, that you've never really thought about them, and B, that you can't take them for granted."

If you want a picture of what US financial officials are trying to avoid, that would be the nation of Iceland.

Not long ago, Iceland was one of the most impressive economies in Europe, its powerful banks striding across the continent, its currency proudly standing apart from the Euro.

On Oct. 9, battered by mounting problems with its wildly extended banks, Iceland's finances collapsed. Trading essentially stopped in Iceland's currency, the krona. The government nationalized its last private bank and the stock market was shuttered for two days to prevent a panic.

What happened to a sector of the American financial system earlier this fall - the collapse of investment banks like Lehman Brothers - happened even more violently in Iceland, whose three biggest banks were stretched beyond the entire nation's capacity to cover their debts. With those banks now worth zero, the country's stock market is a tiny shell of its former self; without a viable currency, the nation is drifting like a ship with no engine. On Friday Iceland announced a rescue deal from the International Monetary Fund, which hasn't bailed out a developed nation in three decades.

Could it happen in the United States? Not precisely. Banks and financial firms are a large chunk of the economy, perhaps worrisomely so, but they don't dwarf the GDP as they did in Iceland. And, overall, the Federal Reserve just issued an encouraging report. Despite the dire look of the TED spread, the credit graphs, and the fear index, it appears that real-world lending to "nonfinancial" companies - that is, those that produce something besides money, indexes, and indexes of money - is still alive and well in the United States.

Stephen Heuser is deputy editor of Ideas and a former business reporter. 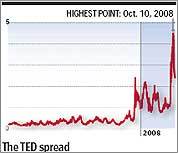 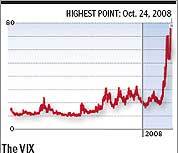 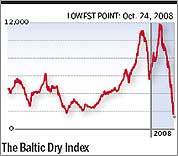 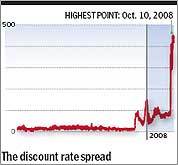 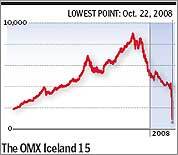