Students abroad, it turns out, are not outperforming Americans 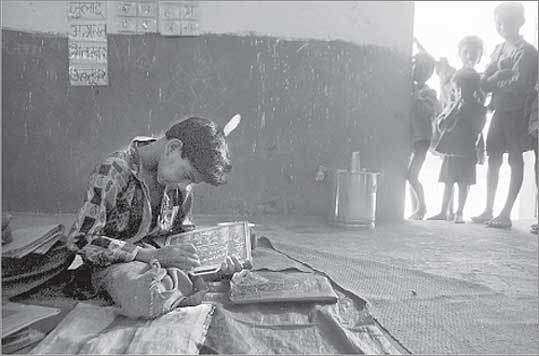 OH, LOOK. THERE'S a new film that portrays American teenagers as distracted slackers who don't stand a chance against the zealous young strivers in China and India. It must be an election year, when American politicians, egged on by corporate leaders, suddenly become indignant about the state of America's public schools. If we don't do something, they thunder, our children will wind up working as bellhops in resorts owned by those Asian go-getters.

The one-hour documentary "Two Million Minutes" was conceived and financed by Robert A. Compton, a high-tech entrepreneur, and can be ordered on DVD from his website, 2mminutes.com. It follows two teenagers in Carmel, Ind., as they sporadically apply themselves to their studies between after-school jobs and sports. The film cuts to similar pairs of high schoolers in India and China who do little but attend classes, labor over homework, and work with their tutors. "Two Million Minutes" has become a key part of the ED in '08 campaign, an effort by Bill Gates and other wealthy worriers to persuade the presidential candidates to get serious about fixing our schools.

The documentary's argument is quite common, verging on a truism. You hear it in Rotary speeches and see it on cable news: Beware, the rising Third World powers are going to eat our lunch. This assumption shapes the American educational debate and feeds popular views (and fears) about our country's place in the world. Its many prominent promoters include former chief Louis V. Gerstner Jr., New York Times columnist Thomas L. Friedman, and former Colorado governor and Los Angeles school superintendent Roy Romer.

I share what I imagine is Bill Gates's distress at seeing Carmel High's Brittany Brechbuhl watching "Grey's Anatomy" on television with her friends while they make halfhearted stabs at their math homework. But the larger truth is that American education is vastly superior to the stunted, impoverished school systems of China and India, which, despite impressive surges of economic growth, are still relatively poor, developing countries. Our best public schools are first-rate, producing more intense, involved, and creative A-plus students than our most prestigious colleges have room for. That is why less-known institutions such as Claremont McKenna, Rhodes, and Hampshire are drawing many freshmen just as smart as the ones at Princeton. The top 70 percent of US public high schools are pretty good, certainly better than they have ever been.

The widespread feeling that our schools are losing out to the rest of the world, that we are not producing enough scientists and engineers, is a misunderstanding fueled by misleading statistics. Reports regularly conclude that the United States is falling behind other countries - in the number of engineers it produces, in the performance of its students in reading or in mathematics. But closer examinations of these reports are showing that they do not always compare comparable students, skewing the results.

For those who look carefully at the performance of our schools, the real problem is not that the United States is falling behind, or that the entire system is failing. It is the sorry shape of the bottom 30 percent of US schools, those in urban and rural communities full of low-income children. We have seen enough successful schools in such areas to know that these children are just as capable of being great scientists, doctors, and executives as suburban children. But most low-income schools in the United States are simply bad.

Not only are we denying the children who attend them the equal education that is their right, but we are squandering almost a third of our intellectual capital. We are beating the world economically, but with one hand tied behind our back.

In 2005, Fortune magazine published a much-cited article that included the claim that China turned out 600,000 engineers in the previous year, India graduated 350,000, and poor, declining America could manage only 70,000. The cover of Fortune showed a buff Chinese beach bully looming over a skinny Uncle Sam. "Is the U.S. a 97-Pound Weakling?" the headline read.

This argument became a favorite target for collectors of bad data, including Carl Bialik, The Wall Street Journal's "Numbers Guy," educational psychologist and author Gerald W. Bracey, and a Duke University research team led by Vivek Wadhwa. The source of the China numbers seemed to be the China Statistical Yearbook, a Chinese government publication, which said that the country produced 644,000 engineering graduates in 2004. But a subsequent McKinsey Global Institute report said that about half of those "engineers" would be no more than technicians in the United States. Bialik could not find a source for the 350,000 Indian engineers, but National Science Foundation officials said the real number was likely much lower. Yet, Bracey found, the discredited numbers have still been presented as fact by Secretary of Education Margaret Spellings, Secretary of Commerce Carlos M. Gutierrez, and Senator John W. Warner.

The headlines about the United States being behind other countries live on, as other reports come out, and the media report dire news. Yet, in a 2007 report, Jim Hull, a policy analyst at the Center for Public Education, which is affiliated with the National School Boards Association, analyzed four major studies of school achievement around the world. When Hull looked carefully at the numbers, he found that the United States did much better than the headlines suggest. In reading, students in only three countries did significantly better than their US elementary and high school counterparts. "The reading performance of US fourth-graders was particularly strong," Hull said. "They scored above the international level . . . while our 15-year-olds scored slightly above the average." In science, fourth- and eighth-graders were above the international average, and only three countries did significantly better than the United States at the elementary school level. (It is worth noting that the studies Hull examined did not include India and China, in part because schooling is so minimal for so many children in these two countries that their performance isn't comparable.)

Hull also examined the frequent charge that American students fare well in international comparisons at earlier ages but fade as they enter their teen years. Some studies did show US fourth-graders doing relatively well, eighth-graders about average, and high school students below average. But when the American Institutes of Research, a Washington-based think tank, did a more careful comparison, making sure the students were actually at the same grade level, the differences disappeared.

Bracey has detected the precise flaws that warp international comparisons. The Trends in International Mathematics and Science Study (TIMMS) of 1999, for instance, seemed to show that American high school students were far behind in advanced math. But the alarming news accounts that followed the study's release - and the politicians who echoed them - failed to note an important caveat. A significant portion of the US test takers, unlike the overseas students, had not yet gotten beyond precalculus. When the TIMMS experts later reanalyzed the data, comparing overseas students only with American high schoolers who had taken Advanced Placement calculus, the United States did much better. Perhaps more American students should be taking calculus, but when they did, they did well in comparison to foreign calculus students. Bracey found other differences that distorted international comparisons. In Europe, many teenagers who hold jobs are tracked into technical schools, but American youngsters commonly combine traditional school and work. Many of the European students on this track were not tested, but their American counterparts were, warping the comparisons.

There is, in any event, scant evidence that test scores have much to do with national economic performance. Robert J. Samuelson, a columnist for Newsweek and The Washington Post, analyzed the disconnect between test scores and economic growth in a column reprinted in his 2001 book, "Untruth: Why the Conventional Wisdom Is (Almost Always) Wrong." Samuelson told of the computer guru at Newsweek's Washington bureau who had an English degree but found, through a series of jobs that taught him new skills, that he had become a technological expert indispensable to Samuelson and his colleagues. "People don't learn only at school," Samuelson concluded. "What counts - for the economy, at least - is what people do at work. . . . On the job, people learn from supervisors, mentors, co-workers, customers and - most important - experience. One Labor Department study estimates that about 70 percent of training in the workplace is informal. Culturally, this is America's strong suit."

Other countries have job training, too. The Germans are praised for bringing teenagers to a technical level that makes them valuable in the workplace right after high school. But the US system excels above all others in allowing enough freedom for people to flounder and fail and change jobs until they find the niche where their talents are put to best use. It's disorderly and unbusinesslike, but it works.

The notion that the United States is losing the international economic race to China and India is also simply implausible. Those two countries may be growing quickly, but they remain far behind and are weighed down by huge, impoverished rural populations. Both countries will continue to send many of their brightest young people to study at American universities. Stupidly conceived and administered immigration laws give many of these foreign students little choice but to leave once they receive their degrees. Given the chance, many more would likely stay in the United States, where the jobs pay better; creativity in all fields is encouraged; and - another blow to education critics - the colleges their children would attend are far better and more accessible.

American primary and secondary schools have the same ability to innovate on the run, even if not as freely as one might wish, and foreign educators are realizing that they may have something to learn from them. Some US schools now regularly host visiting educators from China, Singapore, and Japan, who want to know how American teachers are able to produce such creative students. The Chinese have been particularly impressed by the fact that every Nobel laureate of Chinese descent was educated outside China.

None of this is to say that American schools don't have many flaws. But their worst failure is how many of America's talented young people they are leaving behind. Our good schools are very good, but our bad schools are truly awful. The politicians and business executives who rail about foreign competition are aware of the needs of America's educationally dispossessed children, but they don't talk about them as much. That wouldn't win them the same attention from the news media, and it wouldn't sell as many books.

We need a "Two Million Minutes" that tells a different story, about students who are striving against the odds to make their way to academic success at charter schools in places such as Harlem, Oakland, and the Anacostia neighborhood in Washington, D.C. That would turn the debate in a more realistic direction and illuminate our real education challenge - not beating economic threats from abroad, but beating our doubts about our ability to help the American children who need it most.

Jay Mathews is the education columnist at The . His next book, "Work Hard. Be Nice," about the founders of the KIPP charter schools, will be published Jan. 20. This was adapted from an article in the Spring 2008 issue of the Wilson Quarterly.