Answering your own questions

"DO I WISH we got better broadcast ratings?" asked Stephanie Savage, co-creator of the TV series "Gossip Girl," in a recent interview. "Yes," she answered.

"Would I prefer to dress Jude Law instead of Rolf Harris?" London designer Ozwald Boateng asked. "Of course."

The self-answered question: It's everywhere. And Barbara Harting of Framingham, who has noticed Barack Obama and John McCain using it, wonders how long the speech pattern has been around.

Can I give her an answer? Not very precisely. That's because the trick of answering one's own question - allowing a speaker to control the "dialogue" and anticipate objections - was probably invented long before we had writing with which to record it.

In the vocabulary of rhetoric, much of which dates to ancient Greece, it's called hypophora (hy-PAH-fer-uh), or sometimes anthypophora. (Definitions of all these terms may vary, depending on your source. Scholars have been slicing and dicing and subdividing them for something like 24 centuries.)

But the self-answered question, it's fair to assume, was used long before Aristotle gave names to the rhetorical beasts. Can't you see Fred Flintstone using hypophora to rally the stoneworkers of Bedrock? "What do we want?" "Sleeves!" "When do we want them?" "Before the next ice age!"

The apostle Paul used hypophora: "Is he not also [God] of the Gentiles? Yes, of the Gentiles also." So did the Cowardly Lion, notes blogger Jay Heinrichs at figarospeech.com: "What makes the muskrat guard his musk? Courage."

There may be a turn of phrase that has eluded labeling by the Greeks, but most of them have names. Metaphor, simile, irony, oxymoron, hyperbole - chances are you've tripped over those in one classroom or another. But those are just the famous few; they have dozens and dozens of more obscure cousins.

Me, I'm fond of occupatio, a technique beloved of Chaucer. His narrators go on and on about how impossible it is to describe what they're describing, or they catalog items while insisting they won't. As befits its name, occupatio is a space hog, but here's a tiny excerpt from a passage of "The Knight's Tale" (in modern English):

But how the fire was made to climb so high;

Or what names all the different trees went by

Or how they were felled, shan't be told by me.

Chiasmus, in which the words in the first clause are reversed in the second, is a more economical figure. Word watcher Mardy Grothe celebrated its highlights in "Never Let a Fool Kiss You or a Kiss Fool You," a compendium of chiastic gems like Ambrose Bierce's definition of architect: "One who drafts a plan of your house and plans a draft of your money."

My new favorite rhetorical figure, though, is hypallage (hy-PAL-uh-jee, rhymes with "analogy"), which linguist Arnold Zwicky discussed at the Language Log website last year. Zwicky quoted the Economist's comment on a British political scandal's lack of scandalousness: "No honours seem to have been sold, no politician's Parisian hotel bills picked up, no extramarital toes sucked." (The allusion is to Fergie - the duchess, not the singer - who was notoriously photographed in flagrante digito in 1992.)

Extramarital toes? "This is a figure of speech known as the transferred epithet or displaced epithet," explained Zwicky, because the modifier (extramarital) is applied not to the dalliance, where it logically belongs, but to the wandering toes. Almost as tasty is "free-range mayonnaise," a menu listing recorded at the World Wide Words website.

But not all hypallage is funny, or even striking. Try sleepless night (it wasn't sleepless, you were), joyous dawn, a happy event, or Shakespeare's "rainy marching in the painful field." Or Thomas Gray's line from "Elegy Written in a Country Churchyard": "The ploughman homeward plods his weary way."

We all use hypallage, whether or not we know its name.

And the next big trope is in the wings, waiting for its turn on the revival stage. Ben Zimmer sounded the alert in a recent column at Visual Thesaurus: Thanks to Charlie Kaufman's forthcoming movie, "Synecdoche, New York," we're all going to get reacquainted with synecdoche. (That's sin-EK-duh-kee, and here it's a play on Schenectady.)

And we're ready. IMDb, the movie database, has posted the Merriam-Webster definition of synecdoche: "a figure of speech by which a part is put for the whole (as fifty sail for fifty ships), the whole for a part (as society for high society), the species for the genus (as cutthroat for assassin), the genus for the species (as a creature for a man), or the name of the material for the thing made (as boards for stage)."

Not that we need much help understanding this device. Anyone who's ever said "America" to mean "the United States" - and who hasn't? - is already a master of synecdoche. 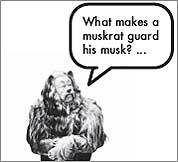