How magicians control your mind

Magic isn't just a bag of tricks - it's a finely-tuned technology for shaping what we see. Now researchers are extracting its lessons.

In September of 1856, in the face of a growing rebellion, Napoleon III dispatched Jean-Eugene Robert-Houdin to Algeria. Robert-Houdin was not a general, nor a diplomat. He was a magician - the father, by most accounts, of modern magic. (A promising young escape artist named Ehrich Weiss would, a few decades later, choose his stage name by adding an "i" to "Houdin.") His mission was to counter the Algerian marabouts, conjurers whose artful wizardry had helped convince the Algerian populace of Allah's displeasure with French rule.

A French colonial official assembled an audience of Arab chieftains, and Robert-Houdin put on a show that, in its broadest outlines, would be familiar to today's audiences: he pulled cannonballs out of his hat, he plucked lit candelabra out of the air, he poured gallon upon gallon of coffee out of an empty silver bowl.

Then, as he recounted in his memoirs, Robert-Houdin launched into a piece of enchantment calculated to cow the chieftains. He had a small wooden chest with a metal handle brought onto the stage. He picked a well-muscled member of the audience and asked him to lift the box; the man did it easily. Then Robert-Houdin announced, with a menacing wave of his hand, that he had sapped the man's strength. When the volunteer again took hold of the box, it would not budge - an assistant to Robert-Houdin had activated a powerful magnet in the floor of the stage. The volunteer heaved at the box, his frustration shading into desperation until Robert-Houdin's assistant, at a second signal, sent an electric shock through the handle, driving the man screaming from the stage. The chieftains were duly impressed, and the rebellion quelled.

The story of Robert-Houdin's diplomacy by legerdemain is well-established in magic lore, in large part because it is the only documented instance, at least since antiquity, in which a conjurer changed the course of world affairs. Stage magic, after all, isn't statecraft, but spectacle and entertainment.

In the past year, though, a few researchers have begun to realize that magic represents something more: a deep and untapped store of knowledge about the human mind.

At a major conference last year in Las Vegas, in a scientific paper published last week and another due out this week, psychologists have argued that magicians, in their age-old quest for better ways to fool people, have been engaging in cutting-edge, if informal, research into how we see and comprehend the world around us. Just as studying the mechanisms of disease reveals the workings of our body's defenses, these psychologists believe that studying the ways a talented magician can short-circuit our perceptual system will allow us to better grasp how the system is put together.

As magicians have long known and neuroscientists are increasingly discovering, human perception is a jury-rigged apparatus, full of gaps and easily manipulated. The collaboration between science and magic is still young, and the findings preliminary, but interest among scholars is only growing: the New York Academy of Science has invited the magician Apollo Robbins to give a presentation in January on the science of vision, and a team of magicians is scheduled to speak at next year's annual meeting of the Society for Neuroscience, the world's largest organization of brain researchers.

And in a world where concentration is a scarce resource, a better understanding of how to channel it would have myriad uses, from safer dashboard displays to more alluring advertisements - and even, perhaps, to better magic.

A great deal of the success of a piece of magic is simply getting the audience's attention and sending it to the wrong place - to a right hand flourishing a wand while the left secrets a ball away in a pocket or plucks a card from a sleeve. Magic shows are masterpieces of misdirection: they assault us with bright colors and shiny things, with puffs of smoke and with the constant obfuscatory patter that many magicians keep up as they perform.

For years, cognitive scientists thought of perception as like a movie camera, something that reproduced the world in its panoply of detail. Over the past decade, though, that model has been increasingly questioned. For one thing, people have a pronounced tendency to miss things that are happening right in front of them. Daniel Simons, a psychologist at the University of Illinois, did a series of now-famous studies in the late 1990s that showed the extent of this cognitive blindness. In one, people were approached by someone asking them for directions, only to have, in the middle of the conversation, that person replaced by another. Only half noticed the change.

In another study, people were shown a movie clip of two teams, one in black shirts and one in white, each passing a basketball around. The subjects were asked to count the number of passes one of the teams made. Half said afterward that they hadn't noticed the woman in a gorilla suit who, midway through the clip, strolled through, paused, and beat her chest.

Because of work like this, a new model has arisen over the past decade, in which visual cognition is understood not as a camera but something more like a flashlight beam sweeping a twilit landscape. At any particular instant, we can only see detail and color in the small patch we are concentrating on. The rest we fill in through a combination of memory, prediction and a crude peripheral sight. We don't take in our surroundings so much as actively and constantly construct them.

"Our picture of the world is kind of a virtual reality," says Ronald A. Rensink, a professor of computer science and psychology at the University of British Columbia and coauthor of a paper on magic and psychology that will be published online this week in Trends in Cognitive Sciences. "It's a form of intelligent hallucination."

The benefit of these sorts of cognitive shortcuts is that they allow us to create a remarkably rich image of our environment despite the fact that our two optic nerves have roughly the resolution of cell-phone cameras. We don't have to, for example, waste time making out every car on the highway to understand that they are, indeed, cars, and to make sense of how they are moving - our minds can simply approximate from the thousands of cars we have already seen in our lives.

But because this method relies so heavily on expectation - not only to fill in the backdrop around us but to determine where to send what psychologists call our "attentional spotlight" - we are especially vulnerable to someone who knows our expectations and can manipulate them, someone like a magician.

"In magic," says Teller, half of the well-known duo Penn & Teller and one of five magicians credited as coauthors of the Nature Reviews Neuroscience paper, "we tend to take the things that make us smart as human beings and turn those against us."

Misdirection is, in a sense, the conjurer's tool that is easiest to understand - we miss things simply because we aren't looking at them. Martinez-Conde is particularly interested in misdirection, and the question of what it is about certain movements that attract and hold our attention. Robbins, a performing pickpocket and another of the magicians to coauthor the Nature Neuroscience paper, has found, he says, that semi-circular gestures draw people's attention better than straight ones. "It engages them more," he says. "I use them when I'm actually coming out of the pocket."

Martinez-Conde is intrigued by this distinction, and has hypothesized that the particular magnetism of curved motions might spring from the fact that they don't map as easily onto the quick, straight movements, or saccades, that our eyes instinctively use to focus on objects. As a result, she suggests, curved motions might require more sustained attention and concentration to follow.

Other effects, though, are more befuddling. Often eye-tracking studies show that subjects can be looking right at an object without seeing it - car accident survivors report a similar paradox. Or, with just a little encouragement, a person can be made to see something where there's nothing.

The vanishing ball illusion is one of the most basic tricks a magician can learn: a ball is thrown repeatedly into the air and caught. Then, on the final throw, it disappears in midair. In fact, the magician has merely mimed the last throw, following the ball's imagined upward trajectory with his eyes while keeping it hidden in his hand.

But if the technique is easily explained, the phenomenon itself is not. If done right, the trick actually makes observers see the ball rising into the air on the last toss and vanishing at its apex. As Rensink points out, this is something more powerful than merely getting someone to look in the wrong direction - it's a demonstration of how easy it is to nudge the brain into the realm of actual hallucination. And cognitive scientists still don't know exactly what's causing it to happen.

For the moment, the cognitive scientists looking at magic are confining themselves to these sorts of simple effects, and the fundamental questions they raise. Eventually, though, Rensink envisions a sort of periodic table of attention effects: methods for getting someone's attention, methods for deflecting it, methods for causing someone to be blind to something they're looking directly at. Such a taxonomy, he argues, wouldn't just be helpful to magicians. The control and management of attention is vital in all sorts of realms. Airplane cockpits and street signs would be designed better, security guards would be trained to be more alert, computer graphics would feel more natural, teaching less coercive.

Still, even if none of this came to pass, there's a value in simply coming to grips with the gaps and limits in our awareness. Like Robert-Houdin's audience, awed by a magnet, we are more easily manipulated and more likely to put ourselves in compromising situations if we don't know what we don't know.

"The main thing is knowing that you've got limitations," says the cognitive researcher Daniel Simons. "Most people don't understand the extent to which talking on a cellphone affects their driving."

According to Teller, magic, more than anything else, serves as that reminder. And that explains why, despite its comparatively humble effects, it continues even in the age of Imax to attract practitioners and audiences.

"The fundamental thing we do every day is ascertain what is reality, it's this diagnosis of what the signals coming into our eyes are supposed to mean," he says. "We say, 'That's a fence, I must not walk into it,' or, 'Is that a car coming around the corner? How much can I see of it? Oh, no, it's only a bicycle.' "

What draws people to magic, he believes, is an appreciation of how slippery that seemingly simple diagnosis can be.

"They realize," he says, "that the best way to grasp the power of deception is to do it themselves." 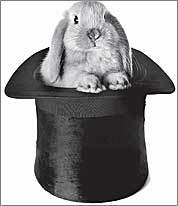