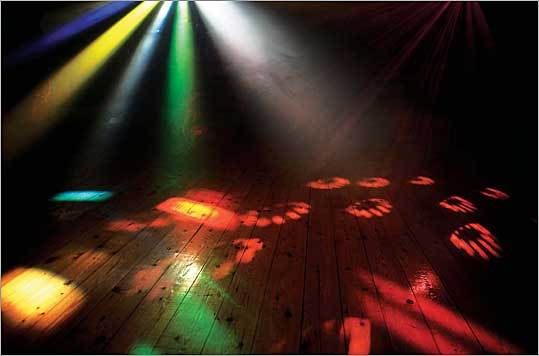 And the beat goes off

The strange story of what happened to dancing

NOT LONG AGO, on a warm Thursday evening, scores of people were crowded onto one of those party boats that stays docked at a waterfront pier. And from a remarkable distance, you could feel the thump of music. Eventually, Justin Timberlake's irresistible rump-shaker "Sexy Back" came on, and while the song twittered and thwapped, an amazing thing happened: Nobody moved.

A waiter, who could also feel the music, looked over at the docked people and shook his head. "It's a [darn] shame, that music going to waste like that."

If it was just that one boat, you could write it off as another boring party. But every night in cities all over the country, perfectly good music goes to waste on people content to stand there. More than one event function planner and wedding DJ has noticed that it's harder to get the party started. In Boston, the city's humongous twin dance clubs, Axis and Avalon, no longer even exist; they were recently demolished to make way for a giant House of Blues. And for the first time in recent memory, we're having a serious party-dance crisis. Kids were Gettin' Lite and doing the Chicken Noodle Soup and the Soulja Boy not that long ago. But have you tried Gettin' Lite? It practically requires an instruction manual and two feet of clear space around you. Good luck pulling that off at a party.

Clearly we're not dancing the way we did even five years ago. What happened?

It's not that dancing is vanishing. In one sense, it is more popular than ever. On television, this year there have been no fewer than four dance shows: "Dancing with the Stars," "So You Think You Can Dance," "America's Best Dance Crew," and "Step It Up & Dance." On the Internet, YouTube's No. 1 "top favorite" video of all time is the goofy "Evolution of Dance."

But it's no coincidence that as dancing explodes in popularity on TV, it's harder to find at bars and the average party. What's popular on these shows and clips isn't dancing - it's second-hand dancing. These people are dancing so we don't have to.

Where once we were a culture eager to dance among the stars, we're suddenly OK to sit back and watch. In the same sense that we watch more sports than we actually play, we seem to be letting the professionals do our dancing for us, too. And as we outsource our dancing to professionals, something important is lost.

If this keeps up, we'd lose more than just a sense of personal release, or the inventiveness required to move your body to new songs, or the pick-up art of sidling up to someone on the dance floor for a few songs and leaving with a phone number.

On a grander level, dancing helps foster a kind of social harmony. Daniel J. Levitin, the neuroscientist and author of "This Is Your Brain on Music" (Dutton, 2006), points out that over the course of evolutionary history dancing has always been participatory, not spectatorial.

"I think evolution selected music and dance as ways that people could come together and defuse any interpersonal tensions that arise from large groups," he said. "One suggestion is that music and dance helps humans to get along. We see that there is the release of soothing brain chemicals when people sing and dance together." So if we don't dance, we're that much closer to savagery.

If that seems farfetched, consider that in the 20th century on TV and in cities after dark, dancing made racial integration seem at least possible. Black Americans and white Americans who lived in different neighborhoods could share a dance floor. Failing that, white kids were dancing to the music of black artists. It's an amazing common denominator: everybody, in theory, dances. Now the reality is a little different. We watch everybody dance.

It's not that Americans never watched dancing on television before. The history of television tracks the history of popular dance. Teenagers tuned in to watch other kids dancing on "American Bandstand" in the 1950s - and, later, on "Soul Train" and MTV's "The Grind."

But there was an important difference between those and the new dance shows. "Soul Train" and the others weren't purely vicarious: they were instructional. When an episode was over you knew what was cool to do at a club or a concert. And although many of the dancers on those shows were incredible, a lot of them were average. They were us. The camera would actually cut away from the professionals to linger on the amateur dancers.

Today, if you're watching, say, "Dancing with the Stars," you aren't looking for a foxtrot tutorial - you're rooting for Jason Taylor to wipe Kristi Yamaguchi off the map (he failed). The cultural model is no longer the social dance of "American Bandstand" - it's the sports competition. Every routine on these shows is subject to either a judge's approval or his scorn.

The gist of "So You Think You Can Dance" is similar. It's not an encouragement, some bodily lingua franca to speak at your next party, it's a tacit warning: "Kids, don't try this at home." New dance styles, like Getting' Lite or Krumping, are regional expressions that occasionally blow up nationally, but on TV are appropriated by dance crews. Those shows aren't really about the joy of your body moving naturally near some stranger's; they're about the triumph of the dance routine - hours of intensive training, work with a choreographer, rehearsals. Is it any surprise that people are dancing less? You need a stunt double and a PhD in body-rock.

A few weeks ago I was at a nightclub near Faneuil Hall, a place whose dance floor on the right night can still get crowded. This particular evening the bar downstairs was packed while the space near the deejay booth was empty. The Notorious B.I.G.'s "Juicy" came on. Its beat is from Mtume's 1983 hit "Juicy Fruit," and it's a bona fide party-starter. Out of nowhere, one brave soul appeared and began rhythmically, sexily twisting his hips and legs. His arms were in the air, his eyes closed. When he opened them, he saw four strangers staring at him, and like some forest creature caught frolicking in its natural habitat, he took off downstairs. Our National Geographic special was over.

The dancer's name was Neil. He was in the Coast Guard, and smoking a cigarette outside he explained that he loves to dance at bars but is increasingly alone in his enthusiasm. "Guys are just scared of girls laughing at them," he said. "They don't know what to do anymore."

Levitin, the neuroscientist, draws a parallel between people's dancing inhibitions and their discomfort with public singing. In the 1950s, he points out, "people would sit around and sing songs with a piano player. Now there's been a professionalization of singing as well." He suggests that is why we enjoy the first week of "American Idol" so much, because we can laugh at people who don't abide the new social norm: You don't perform in public unless you're really good. Increasingly, he said, we've come to think that way about all social entertainment.

To be sure, there are other factors at work. One is the proliferation of oldies nights, where everyone does something on the dance floor, but it's a kind of dance kitsch. At an '80s night, you don't have to know how to dance to the music - you just have to remember the song and maybe ape a vintage video. So what you get, if you'll excuse the reference, is a safety dance. Nothing is new, everything is known, and the songs are easy to dance to. And at a "soul night" at a bar, you probably won't be hearing a fairly recent hit like Usher's "Love in This Club" or Flo Rida's "Low." The challenge with new stuff is that it's new.

Another contributing factor, strangely, is the rise of DJ culture. Once, the point of a DJ was to keep a party going. DJing now is its own art form, its own show, and paying $20 to see a star like Samantha Ronson or Funkmaster Flex isn't quite the same as heading to a local bar on a Saturday night to hear new pop songs. Ronson expects you to move, but in a sense we're dancing to flatter her and her famous peers as much as we're dancing for ourselves. At a bar, it's hard to dance to a DJ who's just flexing his muscles rather than reading the room and serving the vibe.

After a committed survey of the landscape, things do seem bad for dancing socially. But there is hope. In the Boston area, the dearth of legitimate dance clubs has created oases that turn regular bars into de facto juke joints, where dancing breaks out in small, humid spaces and where part of the thrill is that, by reason of spatial limitation and Boston licensing rules, it feels somehow illegal. There's fun in forcing a space to bend to the will of the people dancing within it.

On the TV front, Nickelodeon recently launched "Dance on Sunset," which is half " Request Live," half how-to-move tutorial that features scores of kids standing around and screaming whenever the show's cast of dancers or a popular recording artist comes out to perform. There's something sweet in the sight of an entire audience of boys and girls leaning their bodies back or rowing their arms, popping and then locking them per the instructions of the show's choreographer, Tony Testa.

It's like watching a faux-street drill sergeant train a dance army. With any luck, Testa's millions of little soldiers will grow into uninhibited young adults who'll put on their dancing shoes and take back the night.