Why poor people spend beyond their means, and how polling places shape election results

IF PEOPLE LOW on the socioeconomic ladder sometimes buy things beyond their means, it may be because of a psychological mechanism that we all share. At Northwestern University, several experiments with students tested the idea that people who feel relatively powerless have a greater desire for high-status goods. The participants were primed to feel either powerful or powerless by having them recall corresponding personal experiences. The participants then indicated their willingness to pay for various products, some that were generic and others that conveyed status (e.g., an executive pen). Those who were reminded of their powerlessness were willing to pay a premium, but only for high-status goods - as a way to regain a sense of power. The authors conclude that "it is those low in socioeconomic status that might be most inclined to pay price premiums, which might lead to a downward spiral of constantly spending beyond one's means in order to compensate for low power."

COULD ELECTION RESULTS depend not only on who votes, but on where they vote? Several researchers examined voting across different polling locations from the 2000 election in Arizona, where a ballot initiative proposed to raise the sales tax to fund education. The initiative received a couple extra percentage points of support from people whose polling location was a school - a boost not seen with other initiatives unrelated to education. This effect did not go away even when adjusting for the possibility that different types of people might be voting in different types of locations. (Support for the initiative did not depend on how new the school was, suggesting that voters weren't consciously assessing their surroundings.) The researchers also ran an experiment that randomly assigned people to view images of schools or office buildings and then vote on the same Arizona initiative. Not only did school images increase support for the initiative, but they significantly mitigated the relevance of one's fiscal philosophy or parental status. None of the participants perceived the images' influence, even after being told. Of course, schools aren't the only kind of polling location: 40 percent of the votes in the 2000 Arizona election were cast in churches.

IN THIS ERA of managed care and high-tech medicine, it's hard to see where bedside manner fits into the healthcare system. Nevertheless, a team of researchers at the University of Wisconsin found evidence that physician empathy can indeed have a significant therapeutic effect. Three-hundred and fifty Wisconsin residents who had come down with a cold were randomly assigned to get "a standard physician visit or an enhanced patient-oriented visit." Those who were most satisfied by their physician's empathic communication reported significantly lower severity and duration of cold symptoms, and experienced a heightened immune response.

Barrett, B. et al., "Practitioner Empathy and Duration of the Common Cold," Brain, Behavior, and Immunity (May 2008).

DEBATES MAY BE entertaining for political junkies, but they aren't necessarily so great for the politicians themselves. An analysis of polling data associated with presidential debates reveals that the risk is much more salient than the reward. The authors compared pre-debate polls of voter preference with the post-debate polls asking who won. They found that candidates are much more likely to underperform than outperform, relative to their support in pre-debate polls, so that the opportunity to win extra support from a debate is outweighed by the danger of losing support. However, the authors note that other factors, including being an incumbent, can offset a weak performance in debates.

WE KNOW SUCCESS has certain benefits, but could it actually help you live longer? Two British researchers looked at biographical data on all the scientists who were in contention for the Nobel Prize in physics or chemistry during the first half of the 20th century. More than 500 scientists were nominated for either prize, and more than 100 of them were winners. The authors estimate that, simply by virtue of winning, winners could expect to live about 1.6 years longer than nominees. The effect had little to do with the amount of money winners received. What was also remarkable was that the average life span among all these scientists was 76 years - the life expectancy for males born today, even though most of the scientists in the study were born in the 19th century. (And for those scientists keeping score: chemists had a higher mortality risk than physicists.)

Rablen, M. and Oswald, A., "Mortality and Immortality: The Nobel Prize as an Experiment into the Effect of Status upon Longevity," Journal of Health Economics (forthcoming). 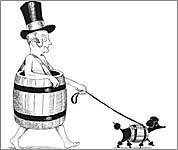