McCain and Obama disagree on whether the president should meet with dictators and tyrants. But scholars suggest the answer is clear.

N THIS YOUTUBE election - think of Hillary standing peacefully on the tarmac in Bosnia, or the Rev. Jeremiah Wright preaching angrily from his pulpit - it is fitting that Senator Barack Obama's most controversial position was elicited via YouTube, in last July's CNN/YouTube debate. Talking to the candidates from a big screen, Stephen Sorta, of Diamond Bar, Calif., said: "Anwar Sadat traveled to Israel, a trip that resulted in a peace agreement that has lasted ever since. In the spirit of that type of bold leadership, would you be willing to meet separately, without precondition {hellip} with the leaders of Iran, Syria, Venezuela, Cuba, and North Korea?" Obama answered that he would, because "the notion that somehow not talking to countries is punishment to them - which has been the guiding diplomatic principle of this administration - is ridiculous."

Obama's affirmative answer became a mainstay of attacks against him from both Hillary Clinton and John McCain, who has drawn his opposition to such meetings as a main difference from Obama. And, while offering some nuances, Obama has held to his willingness to meet with enemy leaders. Last month, for example, he reiterated his willingness to meet with Cuban leader Raúl Castro, "at a time and a place of [Obama's] choosing."

If this back and forth has proven anything, it's that the question of meetings with hostile countries lends itself beautifully to campaign posturing. It seems to have two clear sides, each representing a stark worldview: "tyrants need to be entreated" vs. "tyrants need to be isolated." And each position correlates with a different vision of humanity: "I hope the Russians love their children too," as Sting once sang, vs. "only naive optimists think that way."

But among international relations scholars, there is far less controversy. Virtually all specialists agree that meetings between leaders of regimes at odds can be a good thing, and that while the circumstances of such meetings have to be right for both sides, it's better to express an openness to them, Obama-style, than to rule them out ahead of time. Most thinkers, in the mostly liberal academy and even in conservative think tanks, are deeply skeptical that we can "isolate" our enemies by refusing to talk with them; the very idea of isolation is, to use the words of Harvard's Graham Allison, "a radical exception and departure from the mainstream of policy under Republicans and Democrats forever, and for most of the practice of the last 2,000 years of recorded history." And the major fear that McCain, not to mention President Bush, has raised about meetings - that they confer legitimacy on enemy regimes - gets almost as little credence.

"If you talk to anybody who works in regime stability and ask them the top 100 things that grant legitimacy to a regime, I don't think 'meets with the US president' would be on anyone's list," says Kenneth Schultz, an associate professor of political science at Stanford.

Indeed, given that presidents as different as Carter and Reagan held summits among hostile foreign leaders - Carter presiding over the Camp David accords, Reagan meeting Mikhail Gorbachev - it's strange that the notion of freezing out our enemies has come to seem so mainstream. Allison may be exaggerating slightly when he says that "nobody believes it except John Bolton," the former United States ambassador to the United Nations, but it would be fair to say that this view has a unique popularity among certain neoconservatives favored by President Bush. The neoconservative worldview of Bolton, Vice President Cheney, and others grew up, after all, against Henry Kissinger's realism: the idea that we could deal with odious regimes, and often had to, in order to keep the peace. The Bush doctrine, by contrast, is more favorable toward preemptive war, spreading democracy by force, and unilateral action against other countries. (Less room for talking there.)

Those who emphasize the value of talks do not, of course, say that any dialogue is good dialogue. Rather, while they look forward to a President Obama (or a converted President McCain) bringing a renewed emphasis on diplomacy to the White House, they point to a wealth of lessons that international relations, negotiating theory, and history itself have to teach us about making meetings work.

Most countries throughout history have talked with their enemies - just ask Israel, currently in talks with Syria - and there is almost no country that the United States does not have some contact with, if not at the presidential level then through ambassadors or lower-level diplomats. Despite North Korea's being part of the "axis of evil," American diplomats have met with North Korean diplomats recently, in the "six-party talks." The United States speaks to Iran, too: Ambassador to Iraq Ryan Crocker conveys the administration's position to Iranian diplomats.

And there's a reason that those meetings often come without preconditions: Preconditions often assume the very victories that negotiations are designed to produce. "If you say, 'I won't talk with Iran unless they give up their nuclear program and recognize Israel,' they're not going to talk," says Harvard's Joseph Nye. "And so the danger of setting preconditions is then you can't talk about what you want to talk about. If you won't talk until they say they won't enrich uranium, then they say, 'But that's what we want to talk about.' "

When the president is the one doing the talking, of course, there are certain risks. Nathan Thrall and Jesse James Wilkins argued last month in The that President Kennedy was exactly the wrong person to meet with the Soviet premier. "Despite his eloquence, Kennedy was no match as a sparring partner, and offered only token resistance as Khrushchev lectured him on the hypocrisy of American foreign policy," they write. After the first day, Khrushchev described Kennedy as "too intelligent and too weak." Soon Khrushchev OK'd the Berlin Wall; then came the Cuban Missile Crisis. "And while there were many factors that led to the missile crisis, it is no exaggeration to say that the impression Khrushchev formed at Vienna - of Kennedy as ineffective - was among them."

But there are also circumstances when a high-level, presidential summit can carry unique symbolic import. The great example is Anwar Sadat's visit to Jerusalem in 1977. Contact between Egypt and Israel was nothing new, even though officially Egypt did not recognize the Jewish state. But for President Sadat to step onto Israeli soil was something powerful. "Sometimes you need a leader to make a bold statement," says Robert Mnookin, director of the Harvard Negotiation Research Project. "When Sadat flew to Jerusalem, it was like flipping a switch. The week before, Israel considered Egypt an especially symbolic enemy. Sadat's willingness to do that changed that. Acts by leaders can have costs; they can also have enormous benefits. And to categorically rule them out is a mistake."

Some scholars are careful to emphasize those potential costs. Joshua Muravchik, of the American Enterprise Institute, says that an American president's meeting with Iranian president Mahmoud Ahmadinejad would "give the [Iranian] moderates a kick in the gut." But could it not just as easily exhilarate moderates and liberals just to be near an American president, especially if he came with a message of freedom? Given Obama's popularity abroad, it's possible to imagine that his meetings would embolden pro-American or pro-Western forces wherever he went.

But if one accepts that ill-conceived meetings could strengthen the hands of the wrong people, then it matters not only who represents the Americans, but also who represents, say, the Iranians. "Simply put, does the person with whom we negotiate in Iran have the power to make decisions?" asks the AEI's Michael Rubin (who is generally opposed to Obama's meetings without preconditions). "Why should we be having a discussion about meeting with Ahmadinejad when almost every other foreign leader - the Senegalese president, the Eritrean president, the Qatari foreign minister, the head of Hamas - meets with the supreme leader?"

Obama, in one of his many clarifications of his stance, has made a similar point. "There is no reason why we would necessarily meet with Ahmadinejad before we know that he is actually in power," he said last month. "He is not the most powerful person in Iran."

There is still a common sense critique of Obama's position, one that by its nature is rarely spoken out loud: Maybe an openness to meetings is a good thing, but is it wise to announce that openness? After all, diplomacy involves knowing when to talk and when to shut up; the better part of valor is discretion. Did Obama err by seeming too eager?

Paradoxically, he may have strengthened his hand, should he get elected. In the game of negotiation, one signal of strength is sticking to a position, and of weakness, backing down from a position. Thus, if Obama's original position is liberal toward meetings with foreign leaders, then coming to the table won't seem like a concession, says Andrew Kydd, the author of "Trust and Mistrust in International Relations" and a professor at the University of Wisconsin.

Obama's position could also give him wiggle room domestically. With his stated opposition to such meetings, President Bush would pay a steep political cost were he to meet, say, with Raúl Castro: liberals would claim victory, and conservative friends would turn on him. ("Audience costs," in the cant of political scientists.) McCain, with his tough talk, may be creating the same problem for himself. But Obama has more flexibility: if the meetings never come to pass, he can always blame foreign leaders.

Ultimately, though, it comes back to the question of human nature. Do all people want the same things, or do only naive optimists think that way?

Optimists hope that rogue countries' behavior can be curbed by building strong economic and cultural ties, ones that would be costly to rupture. North Korea and Iran may be very different from us, this thinking goes, but they are similar enough in important ways: If the Western world offers carrots like security guarantees and the riches that come with enhanced trade, these countries will be more likely to follow international norms against terrorism, or abide by United Nations resolutions against nuclear proliferation.

Pessimists will point out that some people have views of the world incompatible with ours. Such people may refuse to trust us, ever. Or they may value honor, glory, or jihad more than they value, say, wealth that would come with trade. It's impossible to know what lurks in the hearts and minds of others. And meetings can yield foolish conclusions (as when Bush met Russia's Vladimir Putin in 2001, and "was able to get a sense of his soul," and found him "trustworthy"). So yes, there are good reasons not to talk.

But, as leaders throughout history have believed, there are good reasons to talk, too. Kennedy and Bush may have stumbled badly in their summits with Russians. But another president may have better luck in a different summit, with a different leader, at a different time. That, anyway, is the audacity of Obama's hope.

Mark Oppenheimer writes the Critical Faculties column. His work can be found at markoppenheimer.com. 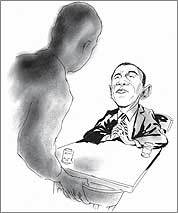