How a legend of rock defied the music's own myths

WHEN CHUCK BERRY wrote "Johnny B. Goode," he planted the seeds for America's reigning myth about a whole musical form. Johnny was a rural savant, illiterate and unsophisticated, with a natural flair for the guitar. "Oh my," Berry sang, "but that little country boy could play."

The story stuck. In the public mind, rock 'n' roll was a Southern amalgamation, a danceable reconciliation of black and white traditions, drawn from fields, churches, and backwoods dives, springing unconsciously from the very soul of America.

And then there was Bo Diddley. Along with Berry and Little Richard and Elvis Presley and a host of other claimants, Diddley, who died last week, invented rock 'n' roll, but he was no little country boy. ("I'm a man," he sang, "spelled M-A-N.") If the myth celebrated the fusion of black Southern blues and white country and western - making the former palatable and the latter cool - Diddley was its Northern, urban exception, streamlining where others combined, inventing where others consolidated. The myth looked to America's past; Diddley pushed forward, a singular, stubborn, sly innovator.

Diddley was celebrated more for his influence than his actual songs. (His highest-charting single was the entertaining but atypical novelty "Say Man," which reached No. 20.) Race was certainly a factor - 1950s white America wasn't quite ready for a black man with Diddley's unapologetic, cocky swagger and wit. But he was also too urban, too modern to be easily assimilated into American culture the way Southerners like Presley were. The romantic view of rock 'n' roll's history is that it helped bridge the racial divide, but Bo Diddley's career showed that other, subtler fault lines of American history - industrial vs. rural, North vs. South - proved more indelible.

He was born Ellas Bates in Mississippi, but he grew up in Chicago, the only Northerner among rock's pioneers. Arriving in the city at the tail end of the Great Migration, he absorbed its musical culture, a distinctive distillation of blues, gospel, and jazz: lean, electric, direct. Technologically savvy, he built and customized his own instruments and amplifiers. He applied the same inventive facility to the blues itself.

His Southern counterparts advertised their influences, drawing comforting parallels with familiar genres - Berry's "Maybelline" was a sped-up country-western song; Elvis leavened his blues with country crooning and the pure earnestness of white gospel. But Diddley seemed intent on eliminating any frame of reference except Bo Diddley himself. The elements were all in place on his first, eponymous single: the already austere blues progressions reduced to a single, repeated chord; the smooth, white-noise wash of cymbals replaced with brittle maracas and rumbling tom-toms; his guitar - its boxy body severing even a visual connection to its acoustic ancestor - fitted with a tremolo unit Diddley built out of automobile and alarm-clock parts, producing a radioactive shimmer.

This was a virtuosity not of decoration, but of engineering, an industrial factory producing a single product: the beat - one Bo Diddley claimed as his own. It had been around, in the Latin-American clave, in the jazz marches of New Orleans, in the imported West African dance that came to be known as juba or hambone. But Diddley drove it home with such power and efficiency that it was reborn as an innovation; in his hands, it was the sound of the future, a Sputnik transmitting a single, insistent rhythm, an uneasy signal to a country in desperate pursuit of good-old-days complacency.

The psychohistorian Robert Jay Lifton would diagnose a postwar "protean man," buffeted by dizzying changes, separated from the "nourishing symbols of [his] cultural traditions." The middle America of the time embraced heritage as a security blanket - many of the early rock 'n' rollers, consciously or unconsciously, augmented their appeal with at least token nods toward those traditions. But Bo Diddley was one of the millions of African-Americans who cut their Southern ties and went north, for opportunity and reinvention. He went to Chicago, where they razed the old landmarks to make room for skyscrapers.

His urban brashness hardly smoothed his career path. Elvis won over variety-show gatekeeper Ed Sullivan with Southern politeness and aw-shucks humility; Diddley nearly hit him after a repertoire mix-up caused Sullivan to derisively call Diddley "black boy." "I was ready to fight," Diddley recalled. "I was a dude from the streets of Chicago." He didn't appear on network television for another decade.

But a later generation of city kids recognized a kindred spirit. Just about everybody stole the beat, but it was the punk and post-punk bands that were eager to claim to have descended from the man himself; the Clash invited Diddley to open for them on their first American tour. (Their lead singer, Joe Strummer, was once asked about his source of inspiration. "Bo Diddley," he replied. Anybody else? "Bo Diddley," he replied.)

Diddley's strongest influence always seemed to be in Britain - the Beatles, the Rolling Stones, the punk rockers. Perhaps too much of America clung to a Jeffersonian, Arcadian ideal to ever fully embrace his forward-looking industry. But Diddley knew that ideal was disappearing. In "Hey, Bo Diddley," he mused about a farm with "women everywhere," only to complain that his baby "slipped on from me like a Cadillac-8." The old America was driving away just as fast, with Bo Diddley at the wheel. You were welcome to hitch a ride - but he wasn't about to slow down for you.

Composer and pianist Matthew Guerrieri writes about classical music for the Globe and also on his blog, Soho the Dog. 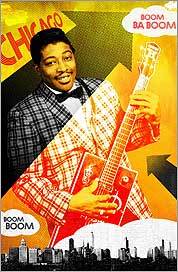