You know the feeling that something is on the tip of your tongue? It offers deep insights into the nature of the mind.

LATE IN 1988, a 41-year-old Italian hardware clerk arrived in his doctor's office with a bizarre complaint. Although he could recognize people, and remember all sorts of information about them, he had no idea what to call them. He'd lost the ability to remember any personal name, even the names of close friends and family members. He was forced to refer to his wife as "wife."

A few months before, the man, known as LS in the scientific literature, had been in a serious accident. He was thrown from his horse and the left side of his skull took the brunt of the impact. At first, it seemed as if the man had been lucky. A battery of routine tests had failed to detect any abnormalities. But now he appeared stuck with this peculiar form of amnesia, so that the names of people were perpetually on the tip of his tongue. It was agonizing.

In the years since, scientists have come to a much firmer understanding of this phenomenon. It's estimated that, on average, people have a tip-of-the-tongue moment at least once a week. Perhaps it occurs when you run into an old acquaintance whose name you can't remember, although you know that it begins with the letter "T." Or perhaps you struggle to recall the title of a recent movie, even though you can describe the plot in perfect detail. Researchers have located the specific brain areas that are activated during such moments, and even captured images of the mind when we are struggling to find these forgotten words.

This research topic has become surprisingly fruitful. It has allowed scientists to explore many of the most mysterious aspects of the human brain, including the relationship between the conscious and unconscious, the fragmentary nature of memory, and the mechanics of language. Others, meanwhile, are using the frustrating state to learn about the aging process, illuminating the ways in which, over time, the brain becomes less able to access its own storehouse of information.

"The tip-of-the-tongue state is a fundamental side effect of the way our mind is designed," says Bennett Schwartz, a psychologist at Florida International University who studies the phenomenon.

One of the key lessons of tip-of-the-tongue research is that the human brain is a cluttered place. Our knowledge is filed away in a somewhat slapdash fashion, so that names are stored separately from faces and the sound of a word and the meaning of a word are kept in distinct locations. Sometimes when we forget something, the memory is not so much lost as misplaced.

The messy reality of the mind contradicts the conventional metaphor of memory, which assumes that the brain is like a vast and well-organized file cabinet. According to this theory, we're able to locate the necessary memory because it has been sorted according to some logical system. But this metaphor is misleading. The brain isn't an immaculate file cabinet - it's more like an untidy desk covered with piles of paper.

Under normal circumstances, we don't notice the clutter because we still manage to find what we're looking for. However, during a tip-of-the-tongue experience, a crucial piece of knowledge gets lost. What's interesting is that, even though the mind can't remember the information, it's convinced that it's around somewhere in the mess. This is a universal experience: The vast majority of languages, from Afrikaans to Hindi to Arabic, even rely on tongue metaphors to describe the tip-of-the-tongue moment. And this is what has drawn the attention of neuroscience: If we've forgotten a person's name, then why are we so convinced that we remember it? What does it mean to know something without being able to access it?

For some researchers, the most interesting aspect of such moments is what they reveal about metacognition, a term that refers to the ways in which we reflect on our own thought processes. (We can think, in other words, about how we think.) Until recently, metacognition was largely ignored as a scientific subject because it seemed too abstract for experiments.

While researchers had long realized that metacognition could be applied to things like mental states and emotions - you know when you're sleepy or angry - it wasn't clear that it could also be applied to particular pieces of knowledge, like the name of a person.

"That seems like it would be a full-time job," says Schwartz. "There's a lot of stuff in your head."

How might the mind keep track of its own contents? For the last several decades, scientists have assumed that the brain contains some innate indexing system, akin to a card catalog in a library, that allows it to immediately realize that it can produce a specific piece of knowledge. This is known as the "direct access" model, since it implies that the conscious brain has direct access to the vast contents of the unconscious.

The tip-of-the-tongue experience, however, is leading researchers to question this straightforward model. According to this new theory, the brain doesn't have firsthand access to its own memories. Instead, it makes guesses based upon the other information that it can recall. For instance, if we can remember the first letter of someone's name, then the conscious brain assumes that we must also know his or her name, even if we can't recall it right away. This helps explain why people are much more likely to experience a tip-of-the-tongue state when they can recall more information about the word or name they can't actually remember.

Perhaps the most surprising feature of the tip-of-the-tongue moment - a fleeting and infrequent experience - is that it can even be studied scientifically. Scientists say, however, that it's actually quite easy to trigger. The experiments go like this: A subject is given the definition of a rather obscure word, such as "goods that have been imported or exported illegally." Then, they are asked whether or not they can produce the word (contraband). A small percentage of the people will then say that, although they know the word, they can't quite recall it: it's on the tip of their tongue.

Brain-imaging studies of tip-of-the-tongue states provide further evidence of how, exactly, the brain keeps track of its own knowledge. Research led by Daniel Schacter, a psychologist at Harvard, has demonstrated that tip-of-the-tongue states activate a distinct network of brain areas in the frontal lobes, including the prefrontal cortex and anterior cingulate cortex. These areas are typically associated with so-called higher brain functions and, during the tip-of-the-tongue moment, they seem to be performing two separate tasks. First, the frontal lobes are responsible for making the metacognitive judgment. And then, once we realize that we probably know what we can't remember, parts of the frontal lobe are in charge of organizing the search for that missing memory. They scour the stacks of the unconscious, as they try to figure out where we mislaid that pesky name.

According to Schacter, the tip-of-the-tongue moment demonstrates a peculiar aspect of memory, which is that different aspects of memory are stored separately in the brain. When we think about a friend, all of our memories of that friend aren't filed away in a single location. Instead, different aspects of the memory are distributed throughout the brain, so that a proper name is separated from a visual memory of a face.

"When we remember something, that memory feels unified," Schacter says. "But the reality is that you assemble each memory out of lots of different pieces. A tip-of-the-tongue state occurs when one of the pieces gets lost."

A similar fragmentation is at work in the production of language. Lise Abrams, a psychologist at the University of Florida, has demonstrated that, in many cases, the key to remembering a word that has been on the tip of the tongue is to encounter another word that shares a first syllable with the one we are trying to remember. For instance, when subjects are trying to recall "bandanna," they are much more likely to come up with the solution if they are given "banish" as a hint. "Banish" and "bandanna" mean very different things, but they activate the same network of brain cells devoted to the sound of the words.

The connections can be even more indirect. Abrams has shown that showing people a picture of a motorcycle can help them remember the word "biopsy." Because the idea of a motorcycle is connected in the brain to the concept of "bike," which shares a first syllable with "biopsy," the seemingly irrelevant cue becomes an effective hint.

"By seeing what allows people to find the answer," Abrams says, "you can really trace all the different ways language is processed in the brain."

The research suggests why the tip-of-the-tongue experience becomes so much more common with age. Numerous studies have documented the effects of the aging process on the frontal lobes, with the areas shrinking in size and decreasing in density. As a result, the frontal lobes become less effective at searching the rest of the cortex for specific pieces of information. This suggests that lapses in memory become more common not just because the memories have faded, but because it is harder and harder to find them. The memory is there, but it looms, frustratingly, just out of reach. 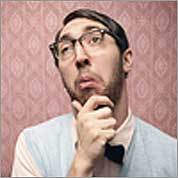