THIS STORY HAS BEEN FORMATTED FOR EASY PRINTING
THE WORD

"THE ORIGIN OF 'belly up to the bar' goes back to Colonial times, I was told," reader Gloria Leitner e-mailed in response to our recent mention of the phrase. "If your belly could reach the bar, you were old enough to drink," according to the tour guide she heard at an old Lexington tavern.

How probable is that? Well, as etymologists know, the better the story, the less likely it's true. And tour guides - perhaps because you'll never see them again - seem especially willing to pass along dubious word histories. In New York, you may be told that "23 skidoo" was a phrase the cops used to shoo ankle-ogling boys away from the windy corner where the Flatiron Building meets 23d Street. But word sleuth Barry Popik, at his eponymous website, reprints newspaper articles on the slang "23" - meaning "get out fast" - that date from 1899, three years before the landmark building was completed.

One of those stories suggests that "23" comes from Dickens's "Tale of Two Cities," where Sidney Carton is no. 23 in line for the guillotine; Popik notes that a play based on the novel, titled "The Only Way," was popular at the time of the coinage. As for skidoo, it "probably comes from 'skedaddle,' a term made popular during the Civil War."

Speaking of the Civil War, General Joseph Hooker, whose statue stands before the State House in Boston, is not the source of the slang word for prostitute, despite the oft-repeated story. His camp followers may have been legion, but the loose ladies were called hookers as early as 1835, when Hooker himself was still a 21-year-old West Point cadet.

And the City of Brotherly Love has its own collection of tall tales for tourists. According to a recent report on Philadelphia Weekly's website, one of the garbled stories claims that Society Hill got its name "because [William] Penn gave it to the Society of Freemasons." The land was actually granted to the Free Society of Traders, a business group.

The "belly up to the bar" story is even more fanciful than these fictions. Though belly was used as a verb when the colonies were young, it meant "swell" or "billow"; the earliest Oxford English Dictionary citation for belly up meaning "get close to" is dated 1907.

There are earlier signs of this belly, without up, in American newspapers. In 1890, a traveler writing in the Daily Nevada State Journal reported on some of the "peculiarities" of Boston. One of them was: "a man cannot, in a single place in the town, 'put his belly to the bar' and get a cocktail . . . he must sit himself down in front of the bar."

And an 1899 essay in the Lima (Ohio) Daily News, on the evils of "treating" fellow drinkers, observed: "When a crowd of men belly a bar and pour stimulants into themselves . . . it really matters little whether they drink Pomery Sec or barrel-house booze."

Even if belly up had been around in Colonial times, it's hard to imagine a tavern enforcing a height requirement, Disney World style. The kids were probably home where they belonged, drinking beer with their families; why would a bartender want to turn away short people? Like so many etymological "just so stories," this one just isn't so.

THE PIT CREW: We recently wondered whether people who speak of a "pit in the stomach" are thinking of an empty space - the image suggested by the original phrase, "in the pit of the stomach" - or a hard lump, like a fruit pit.

Tamie Bilazzo, an acupuncturist in Lexington, didn't cast a vote either way, but she did point out a related sensation that she sometimes treats: "Plum pit qi" syndrome, an energy blockage manifested in the throat. "The plum commonly used in China and Japan . . . has a small pit that can become lodged in the throat," explains the website she cited.

I doubt that many literal plum pits have lodged in literal throats - you don't need experience to coin a metaphor, just imagination - but if you did swallow this figurative plum pit, you would indeed have a pit in your stomach.

But for many Americans, noted linguist Roger Shuy, that image simply wouldn't come up. "In my Midland dialect, we didn't say there are pits in peaches or cherries," e-mailed Shuy, who grew up in eastern Ohio. "Those things were seeds."

So for him and his fellow "seed" people, "pit in the stomach" has no association with fruits. "It connotes a deep hole of some kind, like a dismal abyss," he says. And "if speakers of other US dialects have trouble with this, that's their problem. You have to draw a dialect isogloss somewhere." 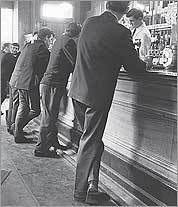