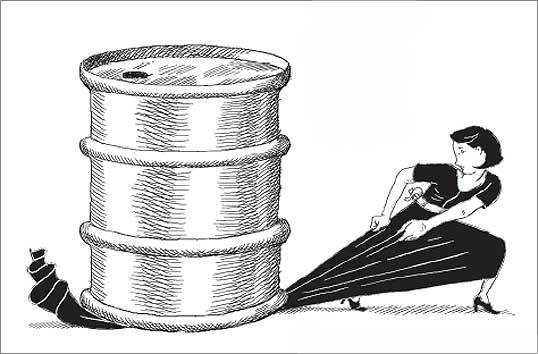 How oil oppresses women, feeding to the test, and more

THE CONVENTIONAL WISDOM is that men are mainly interested in a woman's physical features, while women are mainly interested in a man's earning potential. New research challenges this. Two psychologists carried out a large study of speed-dating, which entails men and women pairing up to talk for a few minutes and then moving on to another pairing. They studied college students, who reported on their thoughts and experiences before, during, and after a speed-dating event. There was no systematic gender difference in the attributes that sparked romantic interest, except that men seemed slightly more interested than women in a prospective partner's earning potential, not vice versa. Perhaps the romantic ideal just doesn't correspond to everyday attraction, or, as some of the data suggests, the sheer emotional "uncertainty or anxiety often associated with developing relationships" may override whatever generic preferences men and women do have.

Eastwick, P. and Finkel, E., "Sex Differences in Mate Preferences Revisited: Do People Know What They Initially Desire in a Romantic Partner?," Journal of Personality and Social Psychology (February 2008).

UNLESS YOU LIVE in a cave, you've heard that our dependence on oil has serious implications for the environment, national security, and the economy. But now we can add one more big issue: gender equality. Backed up by four decades of data from around the world, a political scientist is making the case that the value of a country's oil production -- and, by extension, our own consumption of oil -- undermines progress for women, especially in developing countries. His theory goes like this: The value of a country's oil production boosts the value of a country's currency, which shifts the country's economy toward imports and local goods and services and away from low-wage export-oriented sectors that are more likely to draw women into the workforce. Without a lot of working women, it is more difficult for women to expand their role outside of the family and mobilize against patriarchal institutions. And, he argues, the effect of Islam is small compared with the effect of oil.

CROSSWORD PUZZLES GIVE your brain a workout, but social activities may be just as good. A team of psychologists decided to see if being social improves subsequent cognitive performance. First, they analyzed data from an in-depth national survey of adults and found that people who were more social with friends, neighbors, and relatives did better on a brief test of basic knowledge and memory. But this result could simply mean that smarter people are more social, so the psychologists also devised a controlled experiment. They randomly assigned college students to do three different activities for just 10 minutes: debate an issue with another person, work on intellectual problems alone, or watch "Seinfeld." After these activities, the students' cognitive skills were tested. Those who did either the social or the intellectual activity registered superior cognitive performance, with no significant difference between the two.

A COMMON COMPLAINT about educational accountability mandates, like No Child Left Behind, is that public schools are now "teaching to the test." Apparently, though, schools are also "feeding to the test." In the field of nutrition, it is well known that a splurge of calories causes a short-term boost in cognitive performance. Coincidentally, school lunch programs are targeted at the same students who are most at risk of doing poorly on accountability tests, and local school administrators have some discretion in setting the menu. Researchers examined the lunch menus and testing outcomes for elementary schools in a random sample of school districts in Virginia. The data showed that school districts under threat of sanctions added about 100 calories to lunch on testing day and that this splurge was associated with improving pass rates for fifth-graders by up to 7 percentage points. The effect was not seen in third-graders, but they were tested before lunch.

WITH THE PRICE of gas on the rise, SUVs have lost some of their appeal. Nevertheless, one reason people are still drawn to SUVs is that they feel safer. They're higher and heavier than cars, a key consideration with so many other big vehicles on the road. But are these bigger vehicles really safer? One economist has undertaken a rigorous analysis of government accident data and finds that these bigger vehicles do not increase overall safety for their occupants -- and they pose a hazard to everyone else around them. The increase in the market share of the light-truck category (dominated by SUVs) from 1981 to 2004 is responsible for as many as 2,900 more deaths per year.

Anderson, M., "Safety for Whom? The Effects of Light Trucks on Traffic Fatalities," Journal of Health Economics (forthcoming).

Kevin Lewis is a columnist for Ideas. He can be reached at kevin.lewis.ideas@gmail.com.