The joy of boredom

Don't check that e-mail. Don't answer that phone. Just sit there. You might be surprised by what happens.

A DECADE AGO, those monotonous minutes were just a fact of life: time ticking away, as you gazed idly into space, stood in line, or sat in bumper-to-bumper traffic.

Boredom's doldrums were unavoidable, yet also a primordial soup for some of life's most quintessentially human moments. Jostled by a stranger's cart in the express checkout line, thoughts of a loved one might come to mind. A long drive home after a frustrating day could force ruminations. A pang of homesickness at the start of a plane ride might put a journey in perspective.

Increasingly, these empty moments are being saturated with productivity, communication, and the digital distractions offered by an ever-expanding array of slick mobile devices. A few years ago, cellphone maker even began using the word "microboredom" to describe the ever-smaller slices of free time from which new mobile technology offers an escape. "Mobisodes," two-minute long television episodes of everything from "Lost" to "Prison Break" made for the cellphone screen, are perfectly tailored for the microbored. Cellphone games are often designed to last just minutes -- simple, snack-sized diversions like Snake, solitaire, and Tetris. Social networks like Twitter and Facebook turn every mundane moment between activities into a chance to broadcast feelings and thoughts; even if it is just to triple-tap a keypad with the words "I am bored."

But are we too busy twirling through the songs on our iPods -- while checking e-mail, while changing lanes on the highway -- to consider whether we are giving up a good thing? We are most human when we feel dull. Lolling around in a state of restlessness is one of life's greatest luxuries -- one not available to creatures that spend all their time pursuing mere survival. To be bored is to stop reacting to the external world, and to explore the internal one. It is in these times of reflection that people often discover something new, whether it is an epiphany about a relationship or a new theory about the way the universe works. Granted, many people emerge from boredom feeling that they have accomplished nothing. But is accomplishment really the point of life? There is a strong argument that boredom -- so often parodied as a glassy-eyed drooling state of nothingness -- is an essential human emotion that underlies art, literature, philosophy, science, and even love.

"If you think of boredom as the prelude to creativity, and loneliness as the prelude to engagement of the imagination, then they are good things," said Dr. Edward Hallowell, a Sudbury psychiatrist and author of the book "CrazyBusy." "They are doorways to something better, as opposed to something to be abhorred and eradicated immediately."

Public health officials often bemoan the obesity epidemic, the unintended consequence of a modern lifestyle that allows easy access to calories. Technology seems to offer a similar proposition: a wide array of distractions that offer the boon of connection, but at a cost. Already, mobile technology has shaped the way people interact and communicate. People no longer make plans in the same way; public spaces have become semi-private bubbles of conversation; and things like getting a busy signal or being unreachable seem foreign, even quaint. Today, distraction from monotony is not just merely available; it is almost unavoidable.

Perhaps nothing illuminates the speed of social change better than the new fear of disconnection. People driving a car or standing at a bus stop or waiting in a doctor's office by themselves have always had some distractions available to them, from the radio to National Geographic. But until the advent of connected devices, they were still, fundamentally, alone in some way.

Today, there is a growing fear of the prospect of being untethered in the world without the security blanket of a cellphone. In the timescale of human inventions, the mobile phone is still new, but it is already a crucial part of the trinity of things people fear to forget when they leave the house -- keys, wallet, and phone.

"There is this hyper-anxiety over feeling lonely or disconnected," said Kathleen Cumiskey, a professor of psychology and women's studies at the College of Staten Island who says her stepdaughter sleeps with her cellphone at arm's length and considers turning the device off unthinkable. "Our society is perpetually anxious, and a way to alleviate the anxiety is to delve into something that's very within our control, pleasurable, and fun. . . .It feels like it has all the makings of addiction."

In a way, the entrepreneurs looking to capitalize on the small moments of spare time that are sprinkled through modern life parallel the pharmaceutical industry. A growing chorus of mental health specialists has begun to question whether normal sadness and social anxiety are being transformed into disorders that people believe need to be cured -- by the companies offering elixirs. The tech industry may be doing the same thing with disconnection.

Many of the original arguments for having a cellphone -- safety, security, emergencies -- never figure into the advertisements. Like the commercials that show frowning people transformed into smiling, kitten-cuddling normality, technology companies project a happy world of connection where to intentionally disconnect seems freakish, questionable, undeniably an ailment.

Society has accepted connection so well that it takes a step back to see exactly how far things have come. Instead of carrying their entire social universe in a pocket, people used to walk out of their houses and into the world. Today, not picking up the phone for an hour is an act of defiance.

Perhaps understandably, boredom has never caught the attention of the psychological world. Emotions like anxiety, fear, or anger have been subjected to a much more thorough examination than merely feeling drab, according to Richard Ralley, a lecturer in psychology at Edge Hill University in England.

So, Ralley set out to examine boredom more closely, with the idea that the feeling must have a purpose. Just looking around, it was evident that children quell boredom quite naturally, with creativity -- even to the point of taking the packaging around a gift and playing with it for hours. But as people get older, anxious parents and cranky children demand more and more specific stimuli, whether it is a video game or a hot new phone.

As Ralley studied boredom, it came to make a kind of sense: If people are slogging away at an activity with little reward, they get annoyed and find themselves feeling bored. If something more engaging comes along, they move on. If nothing does, they may be motivated enough to think of something new themselves. The most creative people, he said, are known to have the greatest toleration for long periods of uncertainty and boredom.

In one of the most famous scenes in literature, for instance, boredom takes time. Marcel Proust describes his protagonist, Marcel, dunking a madeleine cookie into his teacup.

"Dispirited after a dreary day with the prospect of a depressing morrow, I raised to my lips a spoonful of the tea in which I had soaked a morsel of the cake," Proust wrote. "And at once the vicissitudes of life had become indifferent to me, its disasters innocuous, its brevity illusory . . . I had ceased now to feel mediocre, contingent, mortal."

Marcel's senses are recalibrated, his experiences deepened, and the very nature of memory begins to reveal itself. But it is only through the strenuous process of clearing his mind and concentrating that his thoughts begin to unfurl completely, immersing him in memory. Had Marcel been holding a silver clamshell phone in his hand instead of the delicately scalloped cookie, perhaps he could have quieted the boredom with a quick game of cellphone Tetris. And had Proust come of age with an iPhone in his hand and the expectation that his entire world fit in his pocket, he may never have written his grandiose novel.

Arthur Wright, 55, who works in the travel industry, said that he refuses to carry a cellphone precisely because he has sees the effects every time he ventures out into one of the confession booths our public spaces have become.

"You hear these stupid conversations. . . . You know, it's just 'I'm bored,' and they'll call and chit-chat on the phone," Wright said. "'I'm almost there, I'm turning the corner right now.'{hellip}What would they do without it? It's like kids who use a calculator in school, and they can't add."

Connectivity, of course, has serious advantages. Parents can check in with their kids. Friends separated by hundreds of miles can have a conversation almost as if they were walking side by side. People feel safer.

Still, there has been surprisingly little public discussion of the broad sociological and psychological impact the technology will have. Like much change, it has crept up on people and radically changed behavior and expectations in ways few people could have predicted. At one time, the car was a novelty -- things like getting gas and driving on good roads were difficult to do. Today, the modern world is built around an automotive infrastructure, and is almost impossible to navigate without one.

"We set up a society that functions that way," said Rich Ling, a researcher at the Norwegian telecom firm Telenor and author of "New Tech, New Ties." "And the mobile phone is starting to work in that way."

But as it becomes more difficult to imagine a world without constant connectivity, the very concept of "microboredom" may begin to lower people's tolerance for even a second of empty time.

Paradoxically, as cures for boredom have proliferated, people do not seem to feel less bored; they simply flee it with more energy, flitting from one activity to the next. Ralley has noticed a kind of placid look among his students over the past few years, a "laptop culture" that he finds perplexing. They have more channels to be social; there are always things to do. And yet people seem oddly numb. They are not quite bored, but not really interested either.

That means steeping in uninterrupted boredom may be the first step toward feeling connected. It "may take a little bit of tolerance of an initial feeling of boredom, to discover a comfort level with not being linked in and engaged and stimulated every second," said Jerome C. Wakefield, a professor of social work at New York University and co-author of "The Loss of Sadness." "There's a level of knowing yourself, of coming back to baseline, and knowing who you truly are."

Or, just go ahead. Your phone is vibrating with a message, your e-mail is piling up, a hilarious YouTube video is waiting to entertain you. Me too.

Carolyn Y. Johnson covers business for the Globe. She can be reached at cjohnson@globe.com. 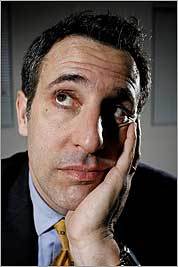