How business can save the world

A provocative study suggests that enlightened management philosophies can spread from the office -- and change societies. 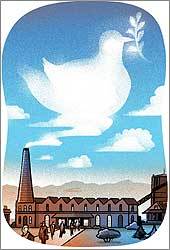 When Milton Friedman famously stated that "the social responsibility of business is to increase profits," he furnished ammunition to both free market evangelists and their critics. Where libertarians see profit as the basis of stability and opportunity, others see only greed and rapine. The relationship between the bottom line and the betterment of society is a fraught one, and politicians, social critics, and tycoons have long battled over where the proper nexus of ethics, philanthropy, and profitability lies.

All have tended to agree, however, that the effects of business are primarily driven by economics: nations that are trading partners are unlikely to risk wealth by waging war on one another; rising salaries offer workers welfare and security; increased profits lead to flourishing philanthropy.

But new research suggests that business can have an important -- and positive -- cultural impact as well. Companies that empower their employees to cut costs in the workplace not only improve their bottom lines, but also may foster civic engagement and contribute to peace in the societies where they operate, according to research published in the November 2007 issue of the Journal of Organizational Behavior.

Author Gretchen Spreitzer, a professor at the University of Michigan's Ross School of Business, examined survey data from 65 countries around the world, comparing detailed measures of employee workplace empowerment with broader measures about the quality of civic life. Her analysis, based on surveys taken between 1981 and 2001, shows that empowered, satisfied employees tend to live in open, peaceful societies -- and that improvements in workplace empowerment often precede social changes. Employees, it seems, can take lessons learned in the workplace and apply them to social and political life.

Spreitzer's research is preliminary, and does not prove that workplace changes lead to social changes, but it does suggest an important new way of understanding the interplay of business and society. Rather than assuming that peace and civility will provide the necessary platform for economic development, economists and policy makers would do well to consider the role that business can play, even in the most strife-ridden places, in starting positive social changes. Businesses can bring jobs, yes, but they may also ignite other kinds of progress that have nothing to do with money.

"The idea that business organizations can be a sort of olive branch for peace rather than just a harbinger of excess and exploitation is attractive," Spreitzer writes.

Other scholars see the work as opening new avenues of research. In a commentary on Spreitzer's article, Jone L. Pearce of the University of California, Irvine, points out that the central assertion that "empowerment [in the workplace] provides the training and confidence needed to peaceably settle disputes" represents a new way of thinking about the relationship not only between workplace and the wider world, but about the influence of individual persons on society as well. And while Spreitzer's data can't prove that worker empowerment directly causes drops in violence, Pearce predicts that researchers will be interested in tackling the question of causality in years to come.

Thinkers since the Enlightenment have been intrigued by the link between business and society. Montesquieu famously stated that "the natural effect of commerce is to lead to peace." This happens, he argued, not merely because commerce thrives in peaceful times, but because trade creates a kind of wealth insusceptible to conquest -- in trying to take trade-based wealth by force, the conqueror can only destroy it. But Montesquieu also argued that desire for profit imperiled what he called virtue -- the concept of equality that lies at the heart of participatory democracy.

In the 1980s, Montesquieuan virtue emerged in the workplace in the form of Total Quality Management (TQM), which originated in the Japanese automotive industry to encourage all employees to contribute ideas. While TQM developed as a way to increase profits, its advocates contend that businesses that encourage workers to voice their opinions also enjoy heightened job satisfaction. Along with such management-theory buzzwords as reengineering and knowledge management, TQM had its faddish side; it was the topic of many books, seminars, and training manuals in the 1980s and early 1990s. Enthusiasm for TQM subsequently ebbed, but its central tenets remain influential not only in American business, but in the nonprofit sector as well. It's these practices that Spreitzer believes offer the most hope for social change.

Spreitzer is not alone in arguing that enlightened management is good for society. In a number of articles in business and law journals, Timothy L. Fort and Cindy A. Schipani have argued that businesses that employ, train, and empower women, foster attitudes of civil engagement in the workplace, and encourage stability in governance can produce positive effects on environmental stewardship and civic life. Between 2001 and 2003, they organized a series of conferences, with the support of the Aspen Institute, devoted to the question of how business contributes to peace.

Spreitzer sought to put some empirical weight behind Fort and Schipani's theories. She took measures of employee satisfaction from the World Values Survey at the University of Michigan, which collected data in 65 countries, from Argentina to Slovenia to Venezuela, for 20 years beginning in 1981. The survey consisted of some 200 questions such as "How free are you to make decisions in your job?" and "Do you follow a superior's instructions only when you feel they are correct?"

She then compared this with data collected by the Economist Intelligence Unit on levels of corruption and violent conflict. Spreitzer found that countries where workers reported having little voice in decision-making had higher levels of unrest, and that as measures of workplace satisfaction improved, over time, indications of contentment with civic life rose, too.

Spreitzer also documented three case studies, which confirmed the results. One company, Rainforest Expeditions, built a lodge with an indigenous community in Peru, employing community members in jobs ranging from housekeeper to guide and lodge manager. As Spreitzer writes, the "sense of collective agency" gained by community members working together to solve business problems "has spilled over into civic matters as well ... [resulting in] strategic plans for sectors such as agriculture, education, ecotourism, and handicrafts." The community used its share of lodge profits to build a school and fund a medical clinic.

It's important to note that the question of causation remains open. Spreitzer uses indirect evidence of empowering practices -- measures of job satisfaction, not tallies of the number of companies that have adopted specific practices. And there are other questions to consider: Do participatory management practices result in open societies, or are the businesses that use them simply more abundant in healthy, peaceable communities? And do positive changes in society reflect enlightened business practice or the impact of politically motivated changes induced by organized labor and other social movements?

There is also the possibility that companies can drive bad social changes, according to Charles Derber, a sociologist at Boston College and author of "The Wilding of America: Money, Mayhem, and the New American Dream" (2006). Empowerment at work may lead to engagement in society, but employees who feel that their company pays mere lip service to participatory management are likely to become cynical about participation in civic life as well. In large corporations, where participatory management may be no more than a flurry of buzzwords and employee participation is diluted due to the sheer size of the company, the results may be detrimental.

"The central question, in an age of large organizations" according to Derber, is this: "Is a viable model of democracy possible?"

And then there is this question: Can businesspeople really be counted on to foster virtue? It's a shaky proposition when profits are at stake. In a 2005 debate in Reason magazine, Whole Foods founder and CEO John Mackey articulated his vision of virtuous, socially responsible business.

"Human nature isn't just about self-interest," Mackey wrote, paraphrasing Adam Smith. "It also includes sympathy, empathy, friendship, love, and the desire for social approval. As motives for human behavior, these are at least as important as self-interest. For many people, they are more important."

In July of last year it was revealed that Mackey used a pseudonym in numerous online posts critical of Whole Foods' competitor Wild Oats, a chain of natural supermarkets Mackey was in the midst of trying to acquire.

Encouraging employees to practice virtue in factory and community is one thing; getting CEOs to do the same may be a challenge of a different order.

Matthew Battles is a freelance writer in Jamaica Plain the author of "Library: An Unquiet History" (Norton, 2003).