Why we can't fight terrorists by cutting off their money 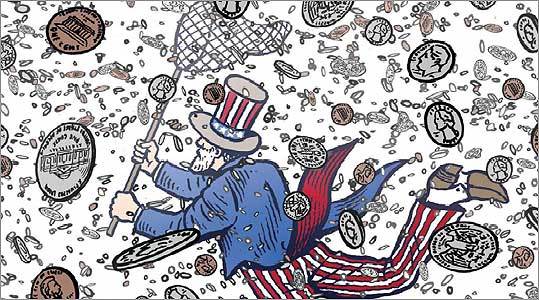 A LITTLE OVER a week ago, a federal jury convicted three leaders of Care International, a defunct Boston-based Islamic charity, of tax fraud. The decision was hailed by prosecutors as the latest victory in the fight against Islamic terrorists, one more blow to their ability to raise the money that sustains their operations. Just last week, the Justice Department announced the indictment of Mark Siljander, a former two-term US congressman from Michigan, for his involvement with an Islamic charity accused of stealing money from the US Agency for International Development to send to an Afghan warlord and past ally of the Taliban and Al Qaeda.

Before the war on terror was anything else, it was a war on terrorist money. Not even two weeks after Sept. 11, 2001, President Bush declared that he was freezing the accounts of 27 individuals, terrorist organizations, nonprofits, and a corporation alleged to be a terrorist front. "Today," he announced in a Rose Garden press conference, "we have launched a strike on the financial foundation of the global terror network."

In the United States, such measures have enjoyed almost unqualified approval among Democratic and Republican politicians alike, and polling shows strong public support. Governments all over the world, many of them not traditional US allies, have signed on, helping to freeze accounts and passing along financial information.

But now critics are starting to suggest that the American war on terrorist finances doesn't work - that it is expensive, time-consuming, and turns people against America, while failing to prevent terrorist organizations like Al Qaeda from getting the relatively small amounts of money that they need. The US government, critics charge, has abused the sweeping powers granted to it in the wake of 9/11, rushing into ill-considered prosecutions and opting for political grandstanding rather than effective policy.

"This whole hunt for terrorist money has been driven by politics and bureaucracy, not reality," said Ibrahim Warde, a political scientist at Tufts University's Fletcher School of Law and Diplomacy, and author of "The Price of Fear: The Truth Behind the Financial War on Terror," which was published last summer.

Warde's book argues that the US policy is counterproductive, based on an outdated organized-crime model, and sacrifices solid intelligence for attention-grabbing trials and terrorism designations. The policy, Warde argues, mistakenly assumes that money, not political grievances or ideology, is the "lifeblood" of terrorism, thereby distracting us from the true root causes of terror. In one form or another, these points echo arguments made by a number of other terrorism finance experts.

This has sparked a sharp debate, with the policy's defenders - like the Justice Department and the Treasury, as well as other experts - responding that Warde's attack, and the alternatives he proposes, constitute a Pollyannaish oversimplification of a complex problem. Warde, they say, paints a distorted portrait of what the government is doing, ignores evidence of real wrongdoing on the part of the government's targets, and misses the purpose of going after terrorist financing in the first place.

"These criticisms misunderstand what this is all about," says Matthew Levitt, a senior fellow at the Washington Institute who has served in both the FBI and the Treasury Department, specializing in terrorism finance investigations. "We're never going to drain the swamp - or whatever ridiculous term people use for it. But we can make it more difficult to raise and launder funds for illicit activities, and we should do what we can while we can."

Some of this dispute turns over how one interprets the facts of cases like Care International, or the mistrial in October in the terrorism financing case of the Holy Land Foundation, formerly the largest Islamic charity in the United States. But it is also a debate over the role that money plays in terrorism, what it means to "support" terrorism, and the ways in which terrorism is and isn't like the sort of financial crimes our laws were created to combat.

The US government's attempts to trace and cut off terrorist financing predate Sept. 11, 2001. The investigations that led to the prosecution of the Holy Land Foundation and the shutting down of the Al-Barakaat remittance corporation in late 2001 both began over a decade ago, and at the time of the 9/11 attacks the Justice Department was prosecuting an IRA gun-runner and a man alleged to have shipped military supplies to Hezbollah. Still, the issue wasn't considered a priority.

"Before 9/11, there were basically three people [at the Justice Department] responsible for terrorist financing, and I was one of them," says Jeff Breinholt, now director of national security law at the International Assessment and Strategy Center, a Washington, D.C.-based research foundation.

After 9/11, prosecutors and regulators were given a new toolkit. The national and international regulatory bodies put in place new rules to spot suspicious transactions, and the Treasury Department grew more aggressive about freezing accounts of suspected terrorism supporters. The Treasury also began to secretly tap into the massive Society for Worldwide Interbank Financial Telecommunication database to try to trace Al Qaeda-related transactions. The USA Patriot Act gave the Justice Department access to information from FBI investigations that had previously been kept off-limits.

But the change was, as much as anything else, one of mind-set. "The mentality became much more aggressively focused on preventing and disrupting terrorist finances," says Levitt, rather than just collecting information on them. According to figures compiled by Robert Chesney, a law professor at Wake Forest University, the number of "material support" terrorism cases (cases that usually, though not always, involve financial support) that the Justice Department has brought has increased more than tenfold since 9/11.

According to critics, one of the biggest problems with the government's efforts is that its expanded legal and statutory toolkit is ill-fitted to the new threat. Warde argues that the financial regulations now in place were originally created to crack down on money-laundering by criminal enterprises. But the financial transfers and transactions that a terrorist organization like Al Qaeda makes tend to be much smaller than those that a drug or art theft or human trafficking ring would make, and are correspondingly harder to track.

"Terrorism," says Warde, "is not expensive."

There is a vigorous debate among financing experts over just how much it costs to run an organization like Al Qaeda - much less something like Hamas or Hezbollah, with its social service networks, bureaucrats, and standing armies. But terrorist attacks themselves do tend to be relatively cheap. The 9/11 attacks cost between $300,000 and $500,000, and according to UN estimates no other Al Qaeda-related attack, including the Bali, London, Madrid, and East Africa embassy bombings, has cost more than $50,000, and most have cost a small fraction of that.

Nikos Passas, a criminology professor at Northeastern University and a specialist in criminal and terrorist finance, asserts that even if post-9/11 financial safeguards and information-sharing regulations had been in place beforehand, none of the hijackers' financial transactions would have raised a red flag.

"These measures were originally conceived as a way of detecting and capturing very significant volumes of money, and they didn't do a particularly good job of that," says Passas. "Expecting the same regulatory regime to capture much smaller amounts is just not realistic."

Levitt contests this, saying that some of the 9/11 hijackers' bank transfers were large enough that today they would catch the attention of regulators. "But I don't know anyone who has said that following the money would have stopped 9/11," he concedes.

The problem with the new approach, with its emphasis on interdicting money rather than just tracing it, both Passas and Warde argue, is that it has been distorted by a sort of bedpost-notching mind-set, where trials and press announcements of the freezing of assets have become the goal rather than the gathering of solid intelligence.

And that, they argue, has made for flimsy prosecutions and mistaken terrorist designations. Warde points to the shutting down of Al-Barakaat and the prosecution of the Holy Land Foundation as examples. Al-Barakaat, which had its assets frozen and its offices raided by the FBI under the suspicion that it was funding Al Qaeda, never had any terrorism charges brought against it and eventually had its assets unfrozen. The 9/11 Commission, which followed up the FBI's investigation into the company, found no evidence that Al-Barakaat had been involved in terrorism financing. Holy Land's trial for providing financial support to Hamas ended in a mistrial last October. (The Justice Department is planning to retry the case.)

These actions, Warde and Passas argue, only worsen the image of the United States in parts of the world where we should be cultivating friends. Al-Barakaat was, before its closing, the largest employer in Somalia, and was the largest conduit for Somalis living abroad to send money to their families living back home - it processed remittances worth $140 million a year. As Warde writes in "The Price of Fear," the closing of Al-Barakaat temporarily cut in half the number of remittances flowing into the country, and remittances are by far the largest source of revenue in Somalia, a country without a functioning economy.

Breinholt, however, argues that the Holy Land mistrial and the failure to bring a terror financing case against Al-Barakaat are the exception rather than the rule. The vast majority of terrorism finance-related cases the Justice Department has brought, he points out, have resulted in convictions.

Other defenders of the government's strategy argue that it makes little sense to give up the threat of public punishment that terrorist designations and court convictions carry. Financial backers of terrorism, unlike suicide bombers, argues Levitt, can be scared straight.

"People who will fund terrorists aren't necessarily like people who send their own children off to be suicide bombers," he says. "They don't want to put their financial empires at risk. They are deterrable."

Ultimately, though, talking about the war on terrorist financing strictly in terms of these highly visible enforcement strategies misses the point, say some analysts. The bulk of the work is out of the public eye: the secret tracking of funds to try to establish the structure and extent of the organizations they support.

The most vehement critics of the Bush administration's terrorist financing regime find themselves in the odd position of arguing for a more covert policy, and one that relies less on the courts - money, they argue, should be secretly traced but only in rare cases used in the sort of prosecutions or designations that can shut down businesses and charities. "I would like to see a more intelligence-led, risk-based approach, and less rush to aggressive premature action." says Passas.

To Warde, the fact that we talk about terrorist financing as its own front in the war on terror suggests a misconception. The money that flows to organizations like Hamas and Al Qaeda through charities and businesses - and he admits that there are such charities and businesses - are signs of support, and it will be impossible to cut off that flow of money without doing something to address the political and ideological roots of that support.

"It's not that there's a pile of money out there and we need to seize that money," he says. "If we fail to win hearts and minds, we're going to increase the support systems for these groups, and that's going to generate all the money they need."