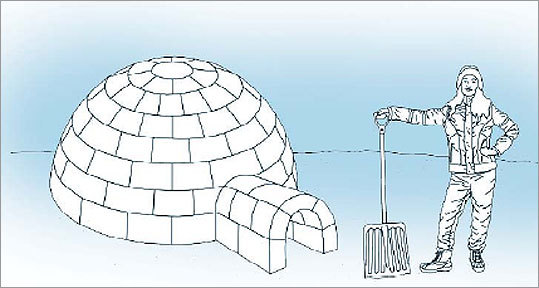 1. THE BEST BUILDING material for an igloo is dense, cold, dry, wind-packed snow - the type you can walk on without leaving footprints. Unfortunately, in New England we rarely find this type of snow. There is another way: Shortly after a snowfall of about 6 inches or more, begin collecting the snow into a pile. Pick an area no larger than 10 feet by 10 feet, near where the igloo is to be built. Pack the snow down to create a uniformly dense block. Continue adding snow and compacting until there is a flat-topped, straight-sided "sheet cake" of compacted snow approximately 18 to 24 inches high.

Wait at least a couple of hours for the snow to firm up before cutting snow blocks.

2. Make a snow angel at the place you plan to build. The outline gives a good idea of the size of the igloo interior.

4. Place blocks in circle around the impression of the snow angel. Trim the blocks with the saw so that they fit tightly together. Make sure the blocks are placed on a solid foundation and won't shift under the weight of the blocks that will be placed on top of them.

5. After the first ring of blocks is in place, cut away a portion of several of the blocks to create a ramp. The ramp should continue between half and three-quarters of the way around the circle of blocks. To form the ramp, start at a joint between two blocks and cut away, discarding the top portion of each block as you go.

6. Starting at the bottom of the ramp, place blocks on the base. The very first block should be half as long as the one underneath it, so that the seams between the blocks will be staggered, like a brick wall. Then start placing blocks on the base, one after another, shaving the blocks so that they fit tightly together. Also shave the top surface of the blocks so they angle slightly inward toward the center of the igloo. To get this right, place a small branch or ski pole vertically at the center of the igloo. There should be a straight line of sight when looking along the top of an angled block toward the base of the center point marker.

7. Before the wall gets too high, it is a good idea to have someone stand inside to assist with construction. They should have a saw handy to help with the shaping of blocks and be prepared to remain inside until the igloo is completed.

Continue stacking and shaping the blocks in an upward, inward, circular spiral until there is only a small opening at the very top of the igloo; the opening should be a bit smaller than the size of blocks that have been used in construction.

Cut and place the cap block, or "king block." It is like a cork plugging the hole in the top of the igloo, supporting the inward-leaning walls of the dome. This block takes a bit of careful shaping. Select a block that is slightly larger than the remaining opening in the igloo. Taper the sides of the block to match the taper of the hole in the dome. Place it into position, but be very careful to not lean against the igloo walls.

8. Now create an entrance. Choose the location of the entryway so that the arch of the opening will be centered beneath a solid snow block and not directly beneath the seam between two blocks. With your saw, cut an arch-shaped doorway in the side of the igloo. This opening should be just large enough for a person to crawl through easily, not much bigger than about 2 by 2 feet. If you want, you can also build a snow-block tunnel entrance to stop the wind. It is a good idea to have an open vent hole near the top of your structure to ensure a reliable supply of fresh air.

With a bit of practice and a couple of helpers, an igloo can be built in two to three hours once the snowpack is prepared. After the heavy lifting is done, crawl into your igloo, sit on an insulating pad, relax with a thermos of your favorite hot beverage, and enjoy a job well done!

Norbert E. Yankielun, formerly a researcher with the US Army Corps of Engineers Cold Regions Research and Engineering Laboratory in New Hampshire, is a consulting electrical engineer in private practice. He is the author of the new book, "How to Build an Igloo." He can be reached through his website, DoctorWhy.com.