Pagan Kennedy is the author of nine books, most recently "The First Man-Made Man: The Story of Two Sex Changes, One Love Affair, and a Twentieth-Century Medical Revolution." 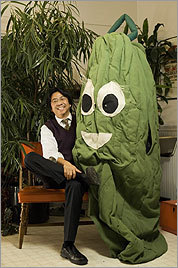 Several years ago, a community garden in the South End erupted into a cultural war - or you might call it a horticultural war.

Chinese farmers grew vegetables in towers tied together with bits of twine and plastic, with buckets of soil strewn about, and the tendrils of squash waving like wild hair. And so it had been for years. But as gentrifiers moved into the neighborhood, they brought their own aesthetic. The newcomers - mostly white professionals - groomed formal flower displays, primroses and irises, sometimes ornamented with the folly of a Victorian fountain.

The flower people and the farmers were standoffish with one another. Asian farmers tended to see rose-pruners as profligate with land that should be used for food. Meanwhile, the flower people objected to the tiny farms in their midst, which some called "shanties"; they also grumbled about the alien vines that crept everywhere, jumping over borders and immigrating into new territory.

Two performance artists had been keeping tabs on the situation, and began to wonder if there could be a creative solution. Jeremy Chi-Ming Liu and Hiroko Kikuchi, a husband-and-wife team, decided to choose one vegetable from the Asian gardens - something foreign and unfamiliar to many residents of the South End - and persuade as many people as possible to taste it. After all, it is through food that we often learn to swallow, and embrace, other cultures.

Liu and Kikuchi picked the most "challenging" plant they could find: bitter melon. It looks like a cucumber with a skin disease and tastes like tonic water. To many Americans, the melon might seem unlovable, but it has an enthusiastic following throughout Asia, Latin America, and East Africa. The bitter melon is - like certain rock bands - big in Japan.

At first, Liu (who is also executive director of the Asian Community Development Corporation) worked with his confreres to promote the plant in the South End. Now, after several successful years, they're taking their campaign for one warty squash - and cultural tolerance - to the entire nation.

IDEAS: How did you encourage people to sample the bitter melon?

LIU: We created a Bitter Melon Week in 2005, and asked all the local restaurants to [cook] a dish using it as an ingredient. Ultimately, we got 14 restaurants to sign on - a really diverse group, from the Peruvian place to a pizza shop to an oyster bar.

IDEAS: And it was then that you formed the National Bitter Melon Council?

LIU: Exactly. We decided to form the council [bittermelon.org] as a vehicle for creating familiarity - just like the National Dairy Council. People took us at face value, as an industry group. We weren't going to say, "Surprise, we're actually performance artists!" We were doing this for real. And then the whole thing became a lot more real when we met the cucurbit guy.

LIU: We got this call from this guy [Thomas C. Andres] in New York. He was really earnest and he said, "I run the Cucurbit Network."

"Cucurbit" is the botanical family that includes squash, cucumber, and bitter melon, and he is the country's leading enthusiast. That's when we had to ask ourselves, "Are we really running a council or not?"...He had a newsletter. An actual newsletter about members of the cucurbit family. The guy was so dedicated.

IDEAS: So he upped the ante. He out-meloned you. Are there other times when that happened?

LIU: Last year we had an exhibit at the Topsfield Fair. We pulled into the fairgrounds and we said, "Oh my God, this is so real." We were kind of in shock. But then we won a first prize.

IDEAS: You beat the giant pumpkin?

LIU: Actually, we won in the educational category. The prize was $25 and a blue ribbon.

IDEAS: How did you educate people at your booth?

LIU: Well, for one thing, we had a Bitter Melon mascot - we each took turns wearing the [costume]. People loved it, but they thought it was a cactus or a pickle. And that was great, because it worked with our metaphor of immigration: Who are you? What are you? By the end of the fair, people started to recognize the mascot and would say, "There goes Bitter Melon!"

IDEAS: Did you wear the mascot suit?

LIU: I wore it one of the days. So I actually became the Bitter Melon. It was so primal. People would look into the big eyes of the Bitter Melon and they would hug me and smile and wave. When Hiroko wore it, the Bitter Melon got to play all the carnival games for free.

IDEAS: It's interesting that mascots always have little white gloves on their hands. As if once you wear white gloves you are no longer human.

LIU: The white gloves worked! You put them on when you're in the mascot suit, and people really respond.

IDEAS: I notice that in this photo, the mascot has a big smile sewn on his face and girlie eyelashes. Is that really appropriate? Shouldn't Bitter Melon be grimacing? Wouldn't he be the Archie Bunker of melons?

LIU: Yeah, I see what you mean, but what is appropriate anyway? We're promoting a product. We have to make it cute. That's part of our duty as the council.

IDEAS: What are your other duties?

LIU: Well, we decided that one of the things the council does is develop more uses for the product. So we came up with this idea of Bitter Melon homeopathy for urban renewal. We'd set up a table in [a place like] Dudley Square or Chinatown and ask people to write what they feel bitter about and then inside of that piece of paper they'd bundle soil and bitter melon seeds. Then we asked them to find a site that they feel bitter about and cure it by throwing the seed bundle there. We have proof that it worked.

IDEAS: What's next for the National Bitter Melon Council?

LIU: We're working on a book; we're talking to agents right now. The working title is "A Manual for Better Living Through Bitter Melon." We've been getting contacted by people from around the country who want to plan a Bitter Melon Week or a Bitter Melon homeopathy event in their own communities. So our book will allow us to franchise the idea: It will offer documentation, recipes, essays by botanists. You follow the instructions, and you can set up a local chapter.

IDEAS: And what about the Berkeley Street garden? Did tensions ease up there?

LIU: This past season [the administrators] put up new garden plot labels with numbers so that flower gardeners have a chance to get to know bitter melon farmers by finding one another's plots - like "Oh hey, I'm in plot C33. Nice to meet you. I'm the one with all the bitter melon."

Pagan Kennedy is the author of nine books, most recently "The First Man-Made Man: The Story of Two Sex Changes, One Love Affair, and a Twentieth-Century Medical Revolution."