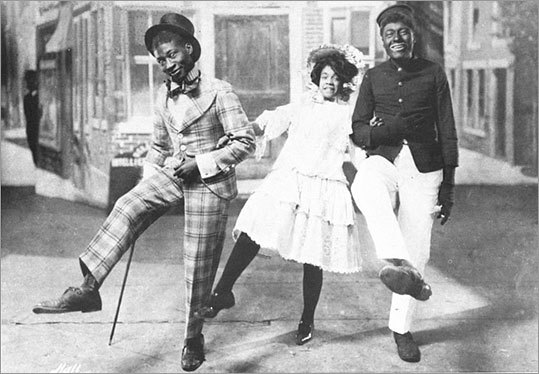 CALL THE Department of Social Services van: I showed "The Jazz Singer" to my children.

The groundbreaking 1927 talkie has recently been released in a three-DVD 80th anniversary set, and it remains weirdly entertaining. My two daughters, old hands at old movies, were enthralled. About two-thirds of the way in, though, the film suddenly turns the corner into unforgivable pop travesty: Al Jolson sits at a backstage makeup table and applies burnt cork to his face. Pulls on a nappy wig. Becomes a cartoon black man, singing "Mother of Mine, I Still Have You."

The kids were appalled. How could someone do that? Didn't the filmmakers understand it was racist?

Welcome, my children, to your culture's dirty secret. Blackface has been kept in a box labeled Things We Don't Talk About ever since the Civil Rights era. When someone takes it out of that box - and, say, puts it on a DVD - the popular reaction tends to be that of small, horrified children: How can they do that? Some reviewers of the reissued "Jazz Singer" have even used the blackface scenes to dismiss the movie as a whole. It's a racist artifact, goes this argument, so it has no value in an enlightened society. Nothing to see here, folks; move along, move along.

This is a mistake, one born out of unease and naivete. Getting loudly outraged over blackface may allow us the luxury of feeling superior to our ancestors, but it's the easy way out. More difficult and more necessary is actually looking at a practice with roots deep in American history, one that had different meanings to the white mainstream, to immigrants, and to the African-Americans who turned it to their own expressive purposes. Only by understanding blackface can we recognize where we haven't progressed; only then can we see the places where blackface still thrives in our culture, disguised and still potent.

In 1927, Al Jolson was an established and extremely popular stage celebrity, something on the order of a classic-rock superstar today. He was the first artist to sell 10 million records; the first, too, to "sell" a song to an audience rather than simply stand there and sing. Blackface had long been a part of his act; to theatergoers of the day, seeing the star without the burnt cork would have been only half a show.

It's important, though, to understand that Jolson came at the tail end of a long history of (mostly) white entertainers dressing up as fake African-Americans. That practice, called "minstrelsy," had already been replaced by vaudeville around the turn of the century. Blackface itself was more than a century old and intrinsically American, born well before the Revolution as a way to embody one of the few "native" character types not beholden to European stage conventions.

By the 1840s, with the massive Broadway success of the Virginia Minstrels - four "blacked-up" white men presenting an evening of "the oddities, peculiarities, eccentricities, and comicalities of that Sable Genus of Humanity" - the form was established as the chief conduit by which white audiences perceived black American life.

In one sense, this was simply part of the mirror in which the nascent nation saw itself. In a deeper sense, it served as a tool for the white mainstream to appropriate and tame various representations of black people - to reduce the race to a populist cartoon that delivered spirituals and other "coon" culture in a way that would have been unacceptable coming straight from the source.

Using the sentimentalized plantation songs of Stephen Foster and others, blackface troupes like E.P. Christy's Christy Minstrels boiled the miseries of slavery into a recognizable ethnic caricature that assuaged white guilt by turning it into the music of comedy and pathos.

Early minstrelsy also denied African-Americans a chance to express their own art in the mainstream by handing that art over to white songwriters and performers who diminished it in a bid to gain "soul." (Sound familiar?) Some commentators of the day were astute enough to pick that up. Frederick Douglass himself blasted the form as "sporting over the miseries and misfortunes of an oppressed people." But Douglass also thought the songs of Foster expressive of "the finest feelings of human nature," and he lavished praise in 1849 on Gavitt's Original Ethiopian Serenaders, a minstrel troupe made up of black artists.

Yes, Virginia, there were black minstrels, and plenty of them. They wore blackface, too. The most celebrated, even beloved, was Bert Williams, a Stanford graduate who starred in the Ziegfeld Follies from 1910 through 1919 and who Booker T. Washington once said "has done more for our race than I have. He has smiled his way into people's hearts; I have been obliged to fight my way."

By the time of "The Jazz Singer," though, minstrelsy had come to stand for something nostalgic, a warm signifier of the "old days" of American stage history before vaudeville and the movies. Blackface wasn't about ethnicity anymore. It was about the past.

Thus, even black reviewers had no problem praising Jolson's talkie breakthrough. The May 12, 1928, headline of the Baltimore Afro-American ran: "'Jazz Singer' Seen as Gripping Drama: Throng See and Hear Al Jolson in Screen Triumph at Regent." Harlem's Amsterdam News called the movie "one of the greatest pictures ever produced" and wrote of Jolson, "Every colored performer is proud of him."

How is this possible? How could a white entertainer in insultingly buffoonish "darky" makeup win over an enlightened black audience? It helps to think of minstrelsy in general and blackface in particular as a mask, one that rightly or wrongly allowed a performer to say things about black culture that wouldn't be accepted otherwise.

At first, only whites were allowed to wear the mask. Then African-American artists began to put it on because it was the only mask available. The difference is that they were able to express certain coded truths through songs and comedy that white entertainers weren't. They were also earning a living in front of black and white audiences - American audiences. They were being heard.

And slowly the voice became authentic. As Nick Tosches points out in his 2001 book on early American popular music, "Where Dead Voices Gather," the fake "coon" songs of minstrelsy gave way to ragtime, jazz, and the blues. In some cases, these new forms carried vestiges of the minstrel past, like Louis Armstrong's high-spirited mugging as he laid down the foundations of small-group jazz. In other cases, the new sounds rode in on an old horse: W.C. Handy's "The Memphis Blues" was first popularized by the white singer George "Honey Boy" Evans, who appeared in blackface on the cover of the sheet music.

By its very theatricality, blackface remained a mask anyone could wear and thereby earn entry to America's cultural banquet. An immigrant Jew, for instance, couldn't expect Yiddish songs of comedy and suffering to be heard very far from Manhattan's Lower East Side, but in burnt cork, the pain could be understood by everyone.

To see "The Jazz Singer," then, is to bear witness to a stunningly busy canvas of ethnic imposture. Jolson, the Lithuanian-born son of a Jewish cantor, plays Jakie Rabinowitz, the son of a Jewish cantor. In a bid to assimilate, Jakie turns his back on his heritage, re-creates himself as "Jack Robin," and becomes a vaudeville star. But he still needs a channel by which he can express his un-WASPy passion, and he finds it singing "Mammy" in blackface. Thus the dangerous emotions of the Ellis Island kid become acceptable only when strained through the romanticized but recognizably "American" caricature of the Darky.

The mind reels. And yet, to understand where we've been is to begin to solve the puzzle of where we are. "The Jazz Singer" demands to be seen; to dismiss it out of hand as a racist artifact is to refuse to engage in the argument it presents about America.

A good, meaty conversation ensued after the girls and I turned off the DVD player. They'd taken in the unthinking racism of old movies before - the comic Negro train porters and such - and they'd learned that with classic film (and all old pop culture) you have to develop binocular vision: You have to understand the moment in which the thing was made while not letting it off the hook of one's own conscience.

But this - this seemed to require special dispensation. And, yes, we took the conversation into the nearer past and the present. Elvis Presley made white teenage America go berserk by singing black R&B: Was that blackface? What about the Rolling Stones, who took credit for Robert Johnson blues songs on their albums in the 1960s? What about Eminem? Is he excused because he directly takes on the topic in interviews and on record? How about the suburban white boys trying to act like gangsta rappers in my girls' homerooms? How about my daughters, or me, or any of us - of any color - when we use black slang in casual conversation?

The mask remains. A crucial aspect of American pop culture, it continues to limit what mainstream audiences are able to perceive and what performers of color are allowed to portray. Honestly confronting "classic" blackface means confronting this invisible modern minstrelsy - and deciding for ourselves at what point normal cultural cross-pollination becomes unexamined appropriation, exploitation, caricature. What do we think we gain when white artists - or white people - borrow black style, and what are the parts of the package we think we're leaving behind? What is hip, anyway?

A few years ago, Spike Lee made an incendiary theoretical masterpiece, "Bamboozled," about black actors trapped in a modern TV blackface show (it's a hit, naturally). The movie's a mess but well worth seeing, and it prompts the same discomfiting questions as "The Jazz Singer." It just applies them to today's sitcoms and Top 40 charts.

As well it should. When Amy Winehouse becomes a critical darling by sounding like a world-weary black woman, or when Christina Aguilera sings in a melismatic style derived from Aretha Franklin - who derived it from black gospel music, which derived it from West African polyrhythmic singing - the border between minstrelsy and the mainstream may safely be said to no longer exist. There's no need to lock blackface up in a box. It's everywhere.

Ty Burr is a Globe film critic. He can be reached at tburr@globe.com