THIS STORY HAS BEEN FORMATTED FOR EASY PRINTING
Sabin Willett 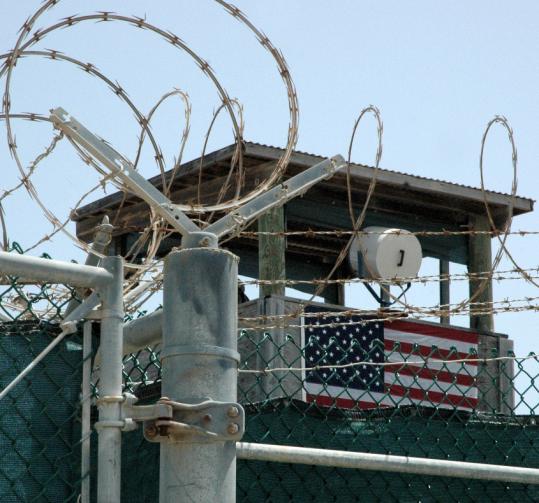 A watch tower looms over the Guantanamo Bay US Naval Base in Cuba. (File 2008/Getty Images)
By Sabin Willett September 15, 2011

WE’RE ABOUT to declare war again - did you notice?

Perhaps the new war declaration escaped your view, sitting as it does on page 359 of a spending bill working its way through Congress, where only legislative aides seem to know about it. It was devised in a closed-door mark-up session of the Senate Armed Services Committee.

Provisions in the National Defense Authorization Act, now before the Senate, would let the armed forces “detain’’ people who are part of or support Al Qaeda, the Taliban, or “associated forces.’’ Detention is a war power. The bill delegates to the Pentagon the decision as to who these associates might be, now and in future. That’s another war power, and one we used to reserve for solemn congressional declarations.

Osama bin Laden may be dead, but some people don’t want the war to be. Or at least a “war’’ that turns military commanders into roving prison wardens, seizing “enemies’’ the military itself will identify. This avoids congressional responsibility for war’s consequences, and many other nuisances: whether the prisoner is soldier or civilian, whether there is evidence, and so on.

Once, when Congress spoke of war, it spoke plainly. Declarations of war were short and obvious. You didn’t have to be a lawyer to find our declarations on Dec. 8, 1941, or Sept. 18, 2001. Even after 9/11, Congress declared a very limited war against a specific enemy: the 9/11 attackers, and those who harbored them. Not against all alleged terrorists, or all who dislike us, and not against “affiliates’’; just the 9/11 attackers. Congress knew then that even a limited war costs us dearly in blood and treasure, in reputation and influence abroad, and in a misery of endless mop-up.

But in the new Congress there is little concern about that responsibility. The bill turns every somersault to ensure that we never close Guantanamo Bay, even for the men now in their 10th year there. Effectively, it declares war forever.

We already know what forever wars get us: more prisoners like Mohammed al-Adahi, the Yemeni oil company employee whose sister married an Al Qaeda man. He went to the wedding, visited an Al Qaeda camp, didn’t like what he saw, left, and never took part in terrorism, nor in any battle. Ten years later, he’s still our prisoner.

We also hold at Guantanamo 57 Yemenis who have been cleared by the military for release as non-dangerous. Under the new bill, we’ll likely have more like them.

And last, the new bill may get us new Abu Zubaydahs. Now we all know, because we were all so relentlessly told, that Zubaydah was “one of Al Qaeda’s top leaders,’’ as President George W. Bush put it. That was years ago. So when, in court papers filed in 2010, the government said that it no longer contends that Zubaydah was involved in the Sept. 11 attacks, nor that he was part of Al Qaeda, you might have thought it would be a big story. In fact, no one but a few lawyers noticed, because no one pays attention to Zubaydah any more. This too, is what a forever war gets you: prisoners seized in haste, and still imprisoned years after the propaganda falls away.

If we learned anything in 10 years, it is that Guantanamo is easy to fill, and very hard to empty. But full is how our politicians want it. With bin Laden dead, wedding guests and cooks will have to suffice. So Congress would have us declare war again, on page 359 of a spending bill, where no one but the lawyers will notice.

Sabin Willett is a partner at Bingham McCutchen in Boston, which has represented prisoners at the Guantanamo prison.