Tattooed by 9/11, millennials make marks of their own 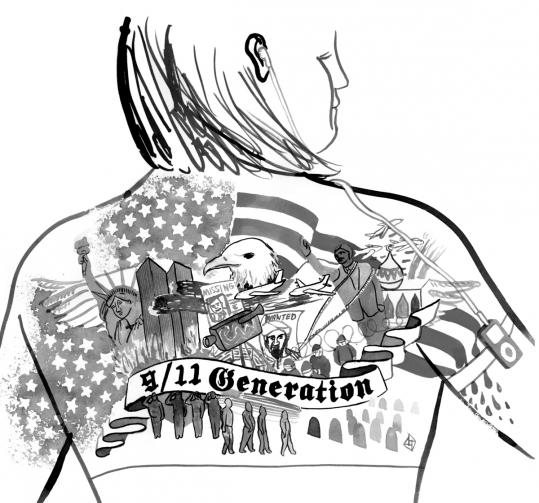 THIS DREADED week has arrived, filled with attempts to come to grips with the lives lost and the nation we became. The usual cast of characters - the widows and warriors, the diplomats and journalists - will provide varying analytical bookends to this decade of war. But the real constituents of 9/11 - the generation that came of age in its wake - will probably be heard from less, yet will carry their lessons farther into the future.

Something happened on the way to Kabul, Baghdad, and Guantanamo. A generation grew up. Call them the 9/11 generation, those born after 1980 and who came of age in the new millennium. They are, according to a Pew Research Center study of demographic trends, more diverse, more connected, more educated, and more tolerant than the rest of us.

And they have tattoos. This generation of millennials chose to brand itself, to mark its independence of all that came before it. Nearly four in 10 have permanently inked themselves. Of those, about half have more than one tattoo.

There is no tattoo demographic: they are rich and poor, Republican and Democrat, urban and rural, of every racial category. For most of us of a different generation, there were those who got tattoos and those who didn’t, with all the judgments that it implied. It wasn’t debated, like extending a curfew or getting a new car; for kids who grew up in most suburbs, it was simply not done.

For many of us, shedding the notion that tattoos divided the world between the “good’’ kids and the more rebellious ones is difficult. But looking around - at television, at the tattoo parlors that open next to , at my babysitters with their discreet ankle designs - it is obvious that the millennials have taken the judgmental edge out of tattoos.

This was, after all, a generation that grew up after the Cold War, with its rigid polarities. The Soviet bloc was long gone before they got their first computer. The world had already transformed from its binary superpowers division into something safer, but, as 9/11 proved, still violent.

The terrorist attacks didn’t change the basic fact of living in a more complicated world; indeed, the resulting decade only confirmed it. America’s difficult standing and the wars we waged were consistent with the millennials’ understanding of the intricate world that they saw before them. Being for us or against us was a dramatic way to think in those early days after 9/11, but that isn’t the defining mantra for their age.

9/11 not only brought war, but also a growing recognition that this nation is not dominant in either its power or victimhood. Millennials are much less likely than older Americans to say that the United States stands above all other nations. The vast majority believe that the United States is one of the greatest countries in the world, “along with some others,’’ according to Pew. Over 70 percent of them believe this nation is among the greatest, but does not stand above all others. They aren’t unpatriotic, but rather more realistic than their elders and maybe even more curious about the world beyond our borders.

That realism breeds a certain amount of humility that may, in the end, serve this country well. It may embolden us to fight harder to preserve our place on the world stage, a stage that the millennials understand that we don’t own. This confident generation, coming of age when they can’t find a job, may look at China and India with a pang of envy. They may miss the days of American dominance even though they were skeptics about it from the start.

And the tattoos seem to confirm these viewpoints: Of the millennials with tattoos, 70 percent have them hidden by clothing. Hidden? What’s the point? Perhaps it is precisely the point. Their motivations are complicated, and hardly filled with devout, in-your-face, look-at-me certainty. And that, in this dreaded week, should make the relatively tattoo-free older Americans somewhat hopeful that the last 10 years did not produce a generation of scared victims, moral absolutists, or intolerable exceptionalists.

Juliette Kayyem can be reached at jkayyem@globe.com. Follow her on Twitter@juliettekayyem.