THIS STORY HAS BEEN FORMATTED FOR EASY PRINTING
Joan Wickersham

Nine days before the sky fell

"SEPT. 11, 2001, changed everything.’’ As the tenth anniversary approaches, a lot of experts will weigh in on that statement. But to see how an event transformed us, we need to remember where we were just beforehand. So I went to the library and looked at The Boston Globe and The New York Times of Sept. 2, 2001. What were we thinking about 10 years ago today?

It was a slow news day, the Sunday of that Labor Day weekend. International coverage in both papers was light. There was only one international story on the front page of the Times, an article about missile buildup in China. There was a photograph of men battling wildfires in California, and a story about unsound engineering at Frank Lloyd Wright’s Fallingwater - straightforward topics (firefighters and structural engineering) that, only days later, would come to be loaded with new and tragic meaning. So would the front-page Globe story about airlines taking “an increasingly hard line on rambunctious sky travelers.’’

One recurring theme was the humdrum quality of everyday life. In Massachusetts, legislative leaders warned about a “day of reckoning’’ over budget shortfalls. In New York, mayoral candidates prepared for a Democratic primary that had failed to engage voters’ interest. (Using imagery which seems unfortunate only in hindsight, the reporter described this dull campaign as a “low-flying contest that will help determine what the city will look like.’’) The vote was scheduled for Tuesday, Sept. 11.

There were pieces about New Yorkers and their fears - nine days before unforeseeable events would change the the meaning of the word “fear’’ in New York. People were afraid of a mysterious sinkhole on the corner of Chrystle and Delancey (“Sky Isn’t Falling, Earth Is Sinking, And Residents Are Worried’’). Parents fretted about sending their children off on the bus for the first day of school. Aspiring tour guides were nervous about passing a New York City history-and-trivia exam scheduled for Sept. 10. In Boston, too, fears were personal and local: an Internet stalker in Billerica, ways to allay kids’ anxiety during a move to a new home. A Globe editorial exhorted readers to enjoy the end of summer “for they can easily be overwhelmed by a sense of doom.’’

Perhaps the most striking thing about the newspapers of Sept. 2, 2001, is the absence of a perceived enemy. Yes, there were stories on turmoil in Greece, Macedonia, Bosnia, Colombia, Cambodia, East Timor, and the West Bank. But I could find no reference to “Al Qaeda’’ by name, nor was there any inflammatory ranting against Islam or Muslims. A piece highlighting several new fall series focusing on the CIA remarked that “Now, without an evil empire to rally against, the new crop of shows sometimes blurs the line between the heroes and villains.’’ A review of General Wesley Clark’s memoir, “Waging Modern War: Bosnia, Kosovo, and the Future of Combat,’’ had the general posing the question: “Which wars is America ready to fight?’’

But with the omniscience of hindsight, it’s possible to sift through the jumble of facts and opinions in that day’s newspapers to pull out three puzzle pieces. The first is a review of David Macey’s “Frantz Fanon,’’ a biography of the Martinique-born psychiatrist who became a leading spokesman in the Algerian revolution against French colonialism. Fanon spoke - often in apocalyptic terms - of internalized racism, violence, and the “oppressed person whose permanent dream is to become the persecutor.’’

The second was an essay in the Times Magazine by FBI agent Christopher Whitcomb, who had just returned from Yemen. While there, he received warning of an ’’immediate and credible threat’’ to himself and the others staying in his hotel. “It felt strange, not being able to fight back, but there was no one to fight,’’ wrote Whitcomb. “It’s the dread of terrorism that wears you down.’’

And finally, in a Week in Review story, Clyde Haberman wrote about the law of unintended consequences in Middle East politics, citing as one example how US support for the Taliban had hampered the Soviets but created a shelter for Osama bin Laden.

The weather forecast on Sept. 2, 2001, was “sunshine, low humidity, high 75.’’ We all remember how blue and clear those September days were. As far as most of us could see, there was nothing on the horizon.

Joan Wickersham’s column appears regularly in the Globe. Her website is www.joanwickersham.com. 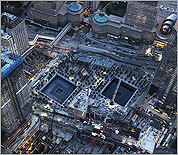 From the Boston Globe:
More photos:
Submit:
Your comment is subject to the rules of our Posting Policy
This comment may appear on your public profile. Public Profile FAQ