THIS STORY HAS BEEN FORMATTED FOR EASY PRINTING
Nicole Gelinas

Irene vs. the Tea Party 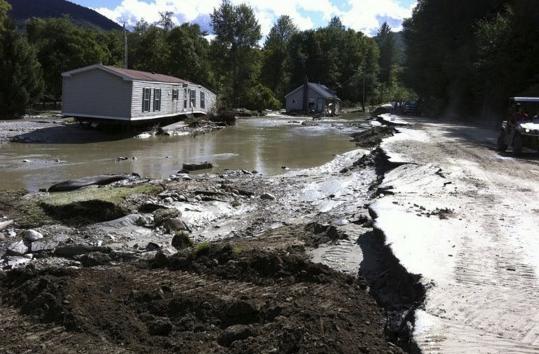 Destruction was severe along Route 100 in Pittsfield, Vt., after Hurricane Irene passed through on Sunday. The photographer, Marc Leibowitz, was married nearby the previous day, and remained stranded with his bride and 60 of their wedding guests yesterday. (MARC LEIBOWITZ, AP)
By Nicole Gelinas September 2, 2011

EVEN AS hundreds of thousands of people in New England, New Jersey, and New York remain without power - and floodwaters still cover roads, houses, and farms - Washington is already starting to bicker about how much Hurricane Irene will cost the federal government.

Republicans should be careful in their approach. Rebuilding after Irene will take place along pre-Tea-Party political lines. The right won’t help its cause if it seizes upon Irene to take another stand about federal spending. The GOP can help the country - and itself - by making sure that recovery efforts are targeted toward real needs and executed efficiently.

The damage caused by Irene has been estimated at $10 billion or more. In Western Massachusetts, Vermont, and upstate New York, dozens of small bridges (including historic covered bridges) and roads have cracked or washed away. Floodwaters have damaged or destroyed water-treatment plants and power utilities.

In New Jersey, seawalls are eroded. In New York, Irene washed out a commuter-line spur; inspectors found a hot tub on the right-of-way. Rebuilding the train tracks and wires will cost tens of millions of dollars. Thousands of people in four states have seen their homes float off their foundations or flood catastrophically. The federal government didn’t require many homeowners inland to carry flood insurance, so many didn’t - meaning insurance won’t pay.

A federal reconstruction package is inevitable - and necessary. Republican House Majority Leader Eric Cantor has said that when it comes to disaster relief, “We will find the money if there is a need for additional monies.’’ But he also insisted that such expenditures be offset by cost cuts elsewhere.

GOP presidential candidates haven’t shone, either. Michele Bachmann said that disaster was God’s way of warning about deficits. Ron Paul counseled getting rid of FEMA, the Federal Emergency Management Agency, which helps states with response and recovery. It would be a big mistake for GOP front-runners Rick Perry and Mitt Romney - both of whom have avoided generating such unfortunate sound bites - to let lesser-tier candidates define the message. Nickel-and-diming disaster victims is, at the least, bad politics.

And not just for presidential candidates. Would Tea Party members really want Scott Brown to vote against helping Adams and Buckland unless Obama finds instant savings in, say, the Medicare budget? After Hurricane Katrina, Republican Governor Haley Barbour of Mississippi didn’t turn down tens of billions of federal aid for his state, nor did he advise that Washington offset that spending.

Because of President Bush’s response to Hurricane Katrina on the Gulf Coast six years ago, and because of the financial crisis in 2008, moderate voters remain skeptical of anti-government Republicans’ competence in difficult situations. The 2010 election, in which the GOP took over the House, wasn’t so much a radical shift in electoral ideology. It was about Obama’s troubles in managing the economy - just as Obama’s election in 2008 was about the GOP’s seeming failure in managing, well, a lot of things.

Given the damage from Irene, congressional Republicans ought to help craft legislation to help states and local governments with their extraordinary rescue and response costs. They’ll need to approve money for bridge, road, and other infrastructure repairs, and to assist farmers and homeowners who lived well outside of federal flood zones. This will cost money - a few billion dollars or more - but unexpected events are what deficits are for.

Republicans could point to another, broader lesson from Irene: We still need a lot of national infrastructure spending, and disasters often point out the kind of infrastructure that is most important. Republicans can remind voters that Obama’s 2009 stimulus didn’t renew the nation’s infrastructure. Dams in California remain in danger of failing and flooding homes and cropland, just as happened in the Northeast.

Disaster recovery can show voters that the nation can spend infrastructure money well. Indeed, that’s what has happened on the Gulf Coast over the past half-decade, as New Orleans, for one, has spent much of its recovery money building better flood protection, bridges, and transit.

State and local governments in the Northeast can show the same success, by rebuilding bridges and roads efficiently and quickly, in months, not years. These are shovel-ready projects - not government waste.

Nicole Gelinas is a contributing editor to the Manhattan Institute’s City Journal.

Power outages across Massachusetts after Irene