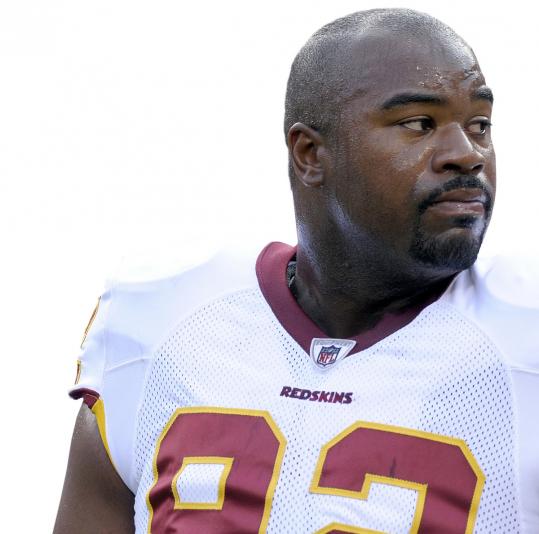 IT DIDN’T take long for the to walk away from Myra Kraft’s legacy.

The wife of New England Patriots owner Robert Kraft - who died of cancer on July 20 - embraced a quaint idea. She believed that character, integrity, and respect for women are more important than yards gained on a football field.

Back in 1996, Myra Kraft’s values led her husband to reverse a decision to draft a University of Nebraska lineman who had been convicted of sexual assault. At the time, the Patriots’ change of heart regarding Christian Peter sent a strong message about what mattered to the organization.

Fast forward to 2011. In the same month that Myra Kraft was lovingly memorialized by family, friends, and assorted Patriots, Coach Bill Belichick began the process of acquiring Albert Haynesworth, a player with an upcoming trial date for a misdemeanor sexual assault charge. That allegation is just the tip of a very large and ugly iceberg.

This defensive lineman has bullied and beaten his way from college to pro football. Over the years, he has physically attacked teammates and launched vicious hits against opponents. A late hit on Raiders quarterback Kerry Collins cost him $5,000 in 2005. In 2006, he was suspended five games for kicking off the helmet of center Andre Gurode and landing a second kick that required 30 stitches. In 2007, Haynesworth was called for unnecessary roughness and fined $5,000 after he slammed Jaguars running back Maurice Jones-Drew to the ground in the season opener. In 2008, it was another $5,000 fine for an unnecessary hit on Chargers quarterback Philip Rivers in a playoff game.

His churlish behavior does not end on the playing field. In 2006, Haynesworth was charged with reckless endangerment after being accused of trying to run a car off the road. Those charges were dropped. Then in 2009, he was indicted on two misdemeanor traffic charges from an accident in Tennessee that left a driver in another car partially paralyzed. He has been sued for allegedly failing to make payment on a $2.38 million commercial loan and also sued for $10 million by a New York stripper who claimed he fathered her child and then refused to pay child support. He reached an out-of-court settlement with a man who accused the 6-foot-6-inch, 335 pound tackle of punching him in the face after another traffic altercation.

The sexual assault trial that is scheduled for Aug. 23, stems from an alleged Feb. 13 incident in Washington, D.C.

As reported by the Globe’s Amalie Benjamin, Haynesworth allegedly fondled a 23-year-old waitress at the rooftop lounge of the W Hotel. After he placed his debit card down her shirt, Haynesworth’s hand followed, court documents allege. The waitress sent another server after Haynesworth’s card was declined and then reported the incident to police. Haynesworth told a security officer who questioned him that “I didn’t touch her.’’ He also said the waitress was “a little black girl’’ and he “don’t even like black girls.’’

No big deal, right? It’s not like he pulled a Ben Roethlisberger. Haynesworth is only accused of fondling a breast, not assaulting a 20-year-old college student in the restroom of a Georgia bar, like the quarterback. The charge against Roethlisberger was dropped, and after a four-game suspension, he went on to play in and lose this year’s Super Bowl.

In a Super Bowl crazed society, the ability to score points in a game takes precedence over decent behavior, no matter who is trampled, on or off the field. Problem players like Roethlisberger are worthy of redemption as long as they lead a team to the promised land. Even the Patriots started taking on bad boys like Randy Moss.

In a 1997 Globe profile, Myra Kraft recalled that once, en route to a Super Bowl game, her son, Josh, told her : “Mom, look at this the way an historian would.’’ She replied, ‘OK, it’s a slice of Americana,’ but added: ‘I’m still amazed at the proportion it takes on.’ ’’

Haynesworth’s shot with the Patriots shows how out of control Super Bowl fever can get, without someone like Myra Kraft to keep life and football in perspective.