Educate cities back to life

Balance of education and immigration can make Lawrence thrive 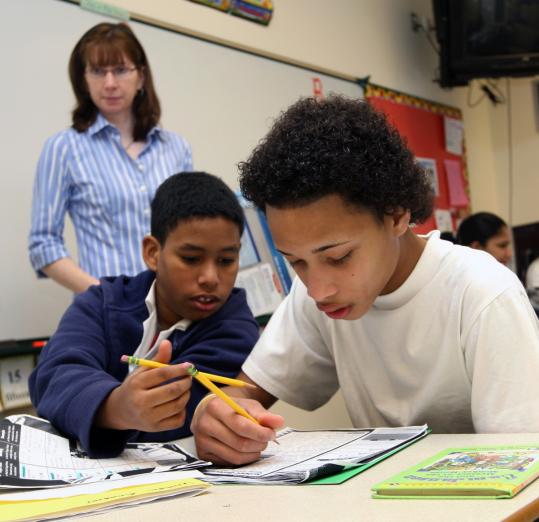 DETROIT HAS been losing people and jobs for decades, but it isn’t the only place where unemployment rates are well above 10 percent. Three of Massachusetts’ 12 largest cities have unemployment rates of 13 percent of more. At the top of the list is Lawrence, at 16.8 percent. Per capita incomes in Lawrence, as in Detroit, are more than 40 percent below the US average.

Yet Lawrence, unlike Detroit, is growing. In fact, it’s growing faster than any other city in Massachusetts. Its expansion as an entry point for immigrants in Massachusetts could be a source of economic strength if Lawrence could balance immigration with education. Regional disparities in Massachusetts are largely explained by education, which is why strengthening the schooling of our poorest communities must be a high priority for the entire state.

In practice, that will mean a keener educational focus on the recent immigrants who are fueling the growth of cities like Lawrence - perhaps with even more support for charter schools, some of which have achieved remarkable results with Hispanic children.

Population changes between 2000 and 2010 suggested a few key factors in the growth of US cities with less than 200,000 people. One was a warm climate - a factor that doesn’t apply here in Massachusetts. Another was a high education level; cities where a quarter or more of adults had college degrees grew much faster than less-educated cities. It’s easy to imagine educated hipsters flocking to dense but manageably sized cities in pursuit of a cool night out.

Still another factor was a sizeable Hispanic population. The United States is becoming increasingly Latin. A city like Lawrence - where more than a third of the population is foreign-born and almost three-quarters are Hispanic - provides new immigrants with the comfort of ethnic enclaves and the ability to get around without a car.

When education and immigration are well-balanced, both forces help cities thrive. The foreign-born can be a bridge to the global economy. In mid-sized, Northern-tier cities where more than a quarter of adults have college degrees, incomes are 45 percent higher than in less well-educated cities.

Larger cities, like Boston and New York, can comfortably combine well-educated elites and poorer new arrivals. The peril of mid-sized cities is that they can become monocultures. If they become boutique towns that house only the well-educated, then they do little to spread prosperity. If they become isolated enclaves of poorer immigrants, they may lack the resources that enable opportunity.

Some former immigrant bastions, such as Cambridge and Somerville, have prospered because they are tightly tied to Boston’s success as a capital of the information age, and because they combine immigration and education. More than one-fourth of the residents of Cambridge and Somerville are foreign-born, and more than one-half of adults have college degrees. In both cities, unemployment rates are below 6 percent, and incomes are well above the national average.

Quincy and Worcester are two other mid-sized cities that are managing the balancing act moderately well. Worcester may have once seemed like an urban disaster, but the city’s abundant educational institutions have helped its population to grow steadily over the last 10 years. Quincy, the state’s most Asian city, has plenty of both foreign-born residents and college graduates.

Expensive infrastructure schemes, like new commuter rail lines, are occasionally floated as tools to turn around these troubled towns. But the children growing up in these areas really need human, not physical, capital. Schooling is the most reliable source of individual and urban success. The work of MIT economist Joshua Angrist and his co-authors has identified particularly large benefits of charter schools for urban Hispanics, which should make us hopeful about the new charters that have recently been approved for Lawrence.

That is only a small step. But Lawrence’s fight is also the Bay State’s fight.

Edward L. Glaeser, an economist at Harvard, is author of “The Triumph of the City.’’ His column appears regularly in the Globe.