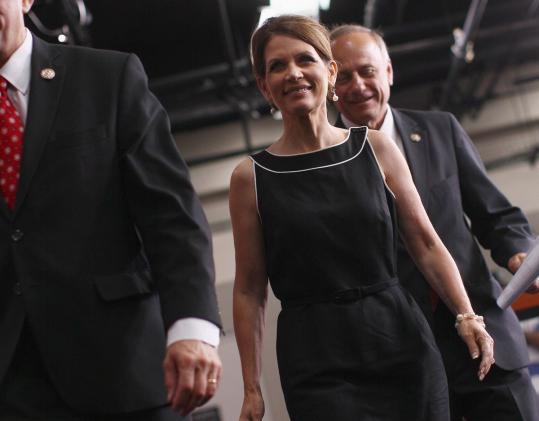 WHEN THE Daily Caller, a news site based in Washington, D.C., reported last week that Michele Bachmann gets migraine headaches, it labored to give the impression that it was breaking an important story.

“Stress-related condition ‘incapacitates’ Bachmann; heavy pill use alleged,’’ the foreboding headline read. (Cue the grim background music.) The article, by Jonathan Strong, depicted a woman who crumples in the face of stress, reacting to the normal aggravations of political life - a staffer’s resignation, a missed flight - with “medical episodes’’ that leave her “incapacitated’’ for days at a time. To cope, she “takes all sorts of pills. Prevention pills. Pills during the migraine. Pills wherever she goes.’’ These “debilitating’’ migraines “occur once a week on average,’’ and at least three times have landed Bachmann in the hospital. Her staff must “constantly’’ consult with doctors to “tweak’’ their boss’s medication.

Bottom line? “Some close to Bachmann fear she won’t be equal to the stress of the campaign.’’ And some former aides “are terrified’’ by the thought of a migraine-prone President Bachmann.

All very melodramatic. But a few things were missing from Strong’s account. Like the nature of all those “pills’’ that Bachmann supposedly takes - addictive narcotics, or something more innocuous? And the identity of any of the unnamed “former aides’’ whose allegations the story recycles - which candidates, if any, are they working for now? Missing too was any evidence that a migraine condition is incompatible with the pressures of the presidency or any other high-powered position.

That’s because no such evidence exists.

The health of presidential candidates is of course a legitimate news topic. That’s especially true since, to quote the historian Robert Dallek, “concealing one’s true medical condition from the voting public is a time-honored tradition of the American presidency.’’

Gone are the days when a presidential candidate with severe medical problems could brazenly claim to be in excellent health and expect to get away with it. During and after the 1960 campaign, John F. Kennedy - who suffered from Addison’s disease, colitis, urinary tract infections, and the near-crippling pain of degenerative back problems - took an astonishing array of medications, including steroids, painkillers, antibiotics, and anti-spasmodics. Yet with the help of a friendly press, the Kennedy machine easily downplayed JFK’s afflictions; one New York Times article described him as being in “superb physical condition.’’

Neither Bachmann nor any other 2012 candidate would get that kind of pass today. But no candidate should be subjected to anonymous media rumormongering about her health, either.

Migraine headaches are a uniquely painful misery, as I can attest from long personal experience, but they are not a stroke or heart disease or polio or Alzheimer’s. At their worst, migraine attacks can involve throbbing head pain, blind spots and other visual abnormalities, intense nausea, chills, and tears streaming from one eye. “That no one dies of migraine,’’ Joan Didion wrote in a famous essay, “seems, to someone deep into an attack, an ambiguous blessing.’’ Such attacks terrified me when I was young; I vividly remember wondering, as an 11- or 12-year-old, if I was dying of brain cancer. Not until I was in college did I learn I wasn’t the only one to experience those agonies.

More than 35 million Americans suffer from migraines; many, Bachmann included, control their symptoms with medication. Far from popping “pills wherever she goes,’’ however, she takes medicine only when she has an attack. According to Congress’s attending physician, Bachmann’s migraines “occur infrequently’’ and are helped by sumatriptan, a standard drug for relieving the dilation of blood vessels that causes migraine pain, and ondansetron, an anti-nausea drug.

In my case, age, not medicine, seems to have been the best therapy; when my odometer passed 40, the migraine attacks started growing less severe. But even before then, migraine wasn’t a paralyzing disability. The headaches hurt like hell, but they didn’t keep me from getting an education or holding a job. I don’t recommend giving a speech or going on TV while having a migraine, but I’ve managed to do both. I imagine Bachmann has, too. Her migraines plainly haven’t kept her from an impressive rise in national politics, or from setting the GOP primary field on fire. If she were “incapacitated’’ on a weekly basis, it’s unlikely she’d have come so far, so fast.

So is it news that a would-be president once complained of migraine attacks that were “paroxysms of excruciating pain’’ - headaches that “came on every day at sunrise and never left me till sunset’’? No - not unless it’s news that Thomas Jefferson, who wrote those words, suffered migraines. Ulysses Grant did, too.

I don’t know if Michele Bachmann can become the next president. But I do know this: She wouldn’t be the first one to live with migraine headaches.