Politicians have the right to evolve on gay marriage 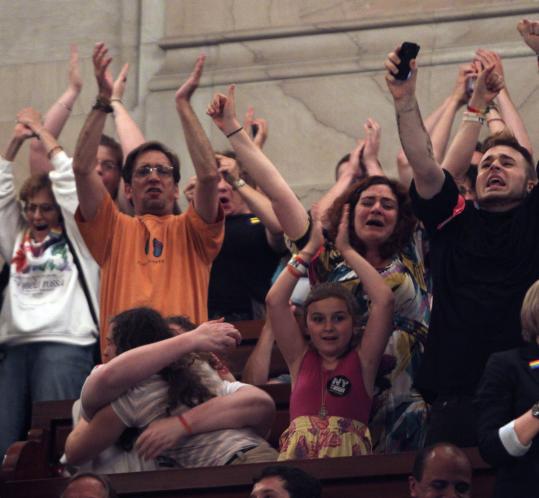 Observers in the New York Senate gallery react to the passage of gay marriage June 24.
By John Kerry July 10, 2011

PUNDITS ASK whether President Obama can afford to “change’’ his position on gay marriage. It’s a phony debate about a real issue.

Marriage is deeply personal - our positions are based on unique combinations of reason, belief, and experience, not polling and politics. Everyone is entitled to his own view, in his own time, including the president.

Can gay marriage be a political weapon? Surely it once was. In 2004, a flyer produced by Republicans proclaimed that if I were elected president, men would marry each other. It was a political season in which the Senate calendar was hijacked to debate a constitutional amendment banning gay marriage, an amendment I opposed. At our national convention in Boston that summer, I said, “Let’s never misuse for political purposes . . . the Constitution of the United States. The high road may be harder, but it leads to a better place.’’ In these last seven years we have come closer to that “better place.’’ Indeed, the architect of the Bush campaign, which used gay marriage as a political cudgel in 2004, now supports gay marriage.

But it’s not just in politics that we have come to a “better place’’ - it’s also the example of thousands of gay marriages in Massachusetts that pushed many of us along in our own journeys. In preparing for the 2008 presidential debates, I felt at times that it was an exercise in legalese to articulate differences between the civil unions I favored and marriage. But seven years after marriage equality became law in Massachusetts, it’s no longer theory, it’s reality.

Seeing is believing. Many of us who once believed civil unions were sufficient to protect legal rights because we thought of marriage as a religious sacrament between a man and a woman, have seen that no church has been forced to do anything that contradicts its teachings. But when two committed people apply for a Massachusetts marriage license, they are equal whether they are gay or straight. It’s not about a word - it’s about equality under the law.

Last March, when the Boston Globe asked if I supported marriage equality I answered yes. But in light of the increased discussion after passage of New York’s law, more is required than a simple “yes.’’ We cannot afford to be imprisoned by politics that say your views are not allowed to grow as you gain knowledge and experience. There’s nothing wrong with acknowledging you’ve changed your mind when your views have evolved. Don’t we pride ourselves on learning by living? Muhammad Ali, said it best: “The man who views the world at 50 the same way he did at 20 has wasted 30 years of his life.’’

These seven years of marriage equality in Massachusetts might as well have been 30 years: they erased decades of myths. It’s hard for a lot of young people to even understand the controversy. For them, including my daughters, the right of gay Americans to marry has never been a question. It’s been a longer journey for my generation from Stonewall to Albany, but the tide of history has still led us in one direction: understanding has replaced apprehension.

We still have miles to travel. People have to make up their own minds in their own time. But when we grant a right to some citizens but deny it to others, we create a second, unequal class. The America we aspire to doesn’t have any second class citizens.

Where do we go from here? I hope more states follow Massachusetts’ lead. But Washington still has work that’s been deferred too long. We repealed “don’t ask, don’t tell.’’ One day that era will seem as antiquated as the era before President Truman desegregated the military. So too will the era of the so-called “Defense of Marriage Act.’’ Repealing it is an unfinished challenge. I’ve joined with many colleagues in introducing legislation to end the law and provide federal recognition and benefits to married gay and lesbian couples. It would end the law’s discrimination, which for three years left a married Massachusetts couple separated by an immigration system that only recognizes heterosexual marriages. It took my intervention to reunite them; thousands just like them are still waiting.

Is this a journey for all of us? Yes - and appropriately so, because it’s a journey for our country. And although it sometimes takes too long, America always ends up on the right side of history.

John Kerry is a US senator from Massachusetts.