THIS STORY HAS BEEN FORMATTED FOR EASY PRINTING
Gareth Cook

Conservatives may actually be natural liberals at heart 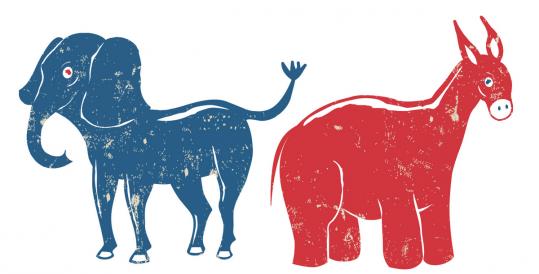 ARE HUMANS liberal or conservative by nature?

Scientists have started to provide provocative answers by looking at the roots of morality. The influential psychologist Jonathan Haidt has surveyed the world’s cultures and suggested that virtually everyone is born with an innate propensity for five broad moral instincts: fairness, not harming others, loyalty to one’s group, respecting authority, and purity.

And in psychological experiments, conservatives value all five of the instincts, yet liberals tend to put far more weight on the first two - fairness and not doing harm - while discounting the other three.

It is easy to see how these play out in our political life. For conservatives, loyalty to a group easily translates into a suspicion of outsiders and, therefore, say, a discomfort with immigration. If respecting authority is a central moral value, then burning a flag is deeply offensive. Liberals want to talk about what is fair, and whether anyone is being hurt, while conservatives respond that liberals are missing the point.

Haidt has explained this dichotomy in terms of what he has dubbed “the great narrowing.’’ In the 18th century, Enlightenment philosophers like John Stuart Mill and Immanuel Kant began arguing that our lives should be guided by moral reasoning, a system built on the abstract principles of fairness and not harming others - and rejected wholesale moral values that have informed many of the world’s religions and cultures.

This is the liberal inheritance. And so a liberal, one can argue, is someone who is born with the ability to feel the tug of the full range of moral instincts, but has learned to suppress some of them. A liberal is just a stunted conservative.

Yet new research published in the Journal of Experimental Social Psychology argues that this version of the moral and political landscape may have it more or less backward - that conservatives are in fact liberals at heart.

The finding is bound to bring heated debate, and this one experiment will not, of course, settle the question of where political opinion comes from. But it does suggest that the partisan divide is not what it would seem to be.

For the research, Jennifer Cole Wright, a philosopher-turned-psychologist at the College of Charleston, considered the five moral instincts articulated by Haidt.

Her question: Which morals come naturally, and which take effort, and are therefore learned?

If humans are inherently conservative, she reasoned, then all five would occur automatically, with no effort. She would see signs of liberals working to ignore the moral tug of loyalty to a group, respecting authority and purity. If humans are inherently liberal, however, then only fairness and not doing harm would come without effort.

To test this, Wright asked people to identify themselves on a spectrum from liberal to conservative, and then answer a widely used questionnaire to probe their moral stances. She found the same pattern that others have, with liberals favoring the Big Two (fairness, no harm) and conservatives supporting all five.

But then Wright wanted to dig deeper. She limited how much people could think about their answers by constantly distracting them, or by giving them an exhausting task to do beforehand. In both cases, everyone - whether liberal or conservative - answered like a liberal. Only fairness and not harming others qualify as humanity’s “core moral sentiments,’’ Wright says. There has been no great narrowing.

The other three moral instincts, Wright and others suggest, are basic parts of human psychology, but they are driven by a sense of threat. When we are afraid, we are more prone to stick with our group, or understand the need for authority, or fear the impure. These reactions, seen in both liberals and conservatives, make perfect sense - dangerous times demand care.

But numerous experiments have shown that conservatives are more “threat sensitive’’ - they see the world as a more dangerous place, are less open to new experiences, are more fearful of losses. Which suggests a fascinating possibility: We are not a nation divided by basic moral values, but by fear.