For Gloucester, NOAA is a fish that rots from the head 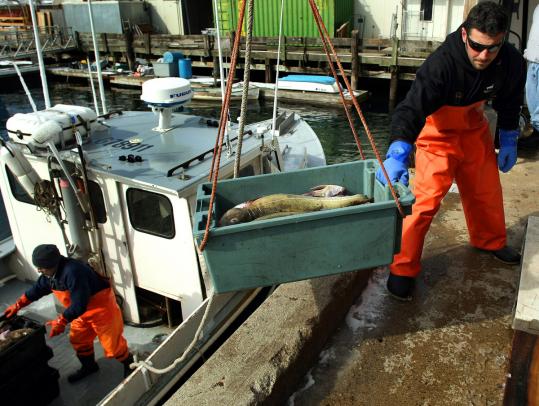 Cod is off-loaded from a boat by Anthony Giacalone at the Gloucester Seafood Display Auction in 2009. (File 2009/John Tlumacki/Globe Staff)
By Joan Vennochi June 30, 2011

GLOUCESTER
THIS ISN’T about counting fish. This is about abuse of power that ran as deep as the ocean, compliments of the US government.

The story of a rogue federal agency that terrorized the fishing industry started nearly a decade ago in Gloucester. Today, its ripples reach all the way to Washington.

About a decade ago, the Commerce Department’s fish police started a fight with Larry Ciulla, who owns and operates the Gloucester Seafood Display Auction with three other family members. Claiming that the auction had exceeded the day’s catch limit by one 60-pound fish, the regulators levied a $120,000 fine and ordered a 90-day shutdown.

Outraged, Ciulla challenged the penalty. He turned to Gloucester lawyer Ann-Margaret Ferrante, who is now a state representative and whose grandfather, father, and uncle were fishermen. Together, they decided to take on the agency known as the National Oceanic and Atmospheric Administration. In need of political backup, they went to US Representative John Tierney, whose district covers Gloucester. Eventually, their grass-roots effort drew in the mayors of Gloucester and New Bedford, the Bay State congressional delegation, and a bipartisan string of lawmakers from Maine to the Carolinas.

This year, federal officials finally acknowledged their own regulators had gone rogue. They were guilty of overzealous, abusive, and targeted enforcement, a series of independent investigations revealed. Regulators were levying crippling fines for invented or inflated offenses, as they relentlessly bullied an entire industry. They were using the fishermen’s money to finance a fleet of cars, a luxury boat, and assorted foreign junkets.

In the aftermath of the findings, Commerce Secretary Gary Locke issued an apology, and some fishermen, including Ciulla, got money back. But the apology and reparations are not enough for Ciulla, who believes the government is just trying to move past embarrassing headlines. “What they’re trying to do is hide injustices and not let other injustices come to light,’’ he said.

The head of NOAA was pushed aside, but the underlying bureaucracy is essentially unchanged, added Ferrante. “Ten years ago, they told us they were accountable to no one. Corruption was brought to light and nothing changed,’’ she said.

Or, as Senator Scott Brown put it succinctly at a recent Faneuil Hall hearing: “What does it take to get fired at NOAA?’’

The enforcement scandal is “a cautionary tale about an agency that is dedicated to science and supposed to be the steward of the oceans and the atmosphere, that somehow allowed a police force to operate in plain sight under principles of neo-fascist, rogue behavior,’’ said Richard Gaines, a longtime Boston journalist who now covers this story for the Gloucester Daily Times.

But the scandal is also a window into a bigger story that has major implications for the fishing industry — and for President Obama. As Gaines reports it, NOAA administrator Jane Lubchenco is leading an effort by the Obama administration to convert fisheries into commodity markets.

Today, fish are a common resource that are harvested by independent boats working under various controls. The Obama administration wants to divide the allowable catch into shares, which are then allocated to participants. The theory is that if fishermen are assured of a certain catch, they will not rush to maximize their own.

Between the enforcement scandal and this commodity market proposal, “Obama would not win an election in any fishing port in America today,’’ predicted Gaines.

The fishing industry is watching what Obama does next. Locke is moving on from the Commerce secretary job; John E. Bryson, Obama’s choice to replace him, is under fire from fishermen for ties to a group that wants to beef up industry regulation. Given recent history, that is not the way to win fishermen’s hearts.

Ciulla, for one, remains skeptical about the agency’s commitment to reform. Being sorry isn’t enough, not when the government is still making it hard for fishermen to earn a living. To Ciulla that’s no happy ending. It’s discouraging, depressing, and un-American.