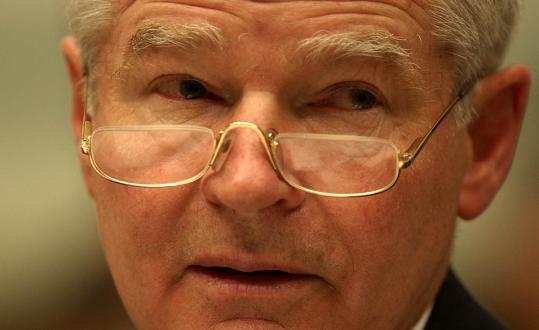 It’s not just about Whitey. It’s also about Billy, and always will be. The arrest of James “Whitey’’ Bulger, the longtime fugitive wanted for 19 murders, puts a spotlight back to William M. Bulger, his younger, ever-loyal brother. The two men exchanged smiles as the handcuffed Whitey was led out of the Boston courtroom on Friday.

William used to dominate the news, as the powerful president of the Massachusetts Senate and later as president of the University of Massachusetts. Now, he mostly prefers a low profile. You could have seen him in April, at a UMass-Boston scholarship dinner, or in June, at a Catholic Charities fundraiser at Marina Bay. In May, he attended the Harvard memorial service for William O. Taylor II, the former publisher of The Boston Globe — the newspaper Bulger still loves to hate for its coverage of his family and his South Boston neighborhood.

A few years ago, Bulger invited me to speak as a guest to a political science course he teaches at Boston College. During my visit, the politician-turned-professor spent a lot of time blasting the press for how it covered him. When I tried to explain the media’s side of the story, he walked out of the classroom. He also came once as a guest to a journalism class I teach and again complained bitterly about his press treatment. When one student asked if he thought the coverage had anything to do with his brother, Bulger frostily acknowledged that it probably did.

But he never really understood. He never accepted that, as long as he remained loyal to a suspected serial murderer who happened to be his sibling, that choice would forever darken the narrative of his life. His legislative accomplishments and charitable works would never make up for sticking with Whitey.

Bulger’s 1996 memoir, “While the Music Lasts,’’ showcases his contempt for the truth about the brother he refers to as “James’’ or “Jim.’’

“In 1991 my brother James became a millionaire,’’ Chapter 9 whimsically begins. He then cheerfully relates the story of Whitey’s improbably lucky lottery win. Explaining how Whitey got $1.6 million out of a $14.3 million jackpot, his brother notes: “I was of course happy for Jim. At the same time, I anticipated there would be speculation, as indeed there was, that he had somehow contrived to cheat.’’

Bulger also notes that at the time of the book’s writing, “Jim had been characterized a fugitive of justice. Regrettably, he has placed himself in a position where anything goes — planted press stories, absurd rumors, wild exaggerations, the lot.’’

Talk about denial. But then, Bulger had plenty of company. When Bulger was Senate president, then-Governor William F. Weld became his best buddy, singing and standing by as Bulger made joking references to his gangster sibling at St. Patrick’s Day roasts. Weld — a onetime US attorney who pursued political corruption cases with great relish — also pushed Bulger for the job of UMass president.

In 2003, the university president was called before a congressional committee charged with investigating the FBI’s ties to mobster informants like his brother. After receiving immunity, Bulger told the committee he received a call from Whitey shortly after he fled — but insisted he hadn’t heard from him since and didn’t know where he was. When Governor Mitt Romney finally forced him out at UMass, Bulger left with a $960,000 severance package and ultimately boosted his pension to $196,000 a year.

Some Bulger loyalists still buy into the Hollywood feelgood story of a good brother and a bad brother who, after 16 years on the lam, turned up in, of all places, Santa Monica. Just like lobster and Cape Cod sunsets, support for the former Senate president is part of Bay State political culture. Staying loyal to ex-House Speaker Salvatore F. DiMasi, even after his conviction on corruption charges, is a variation on the theme.

But for most people, Bulger will be recalled as the man who said only “No comment’’ and “Thank you’’ when a Globe reporter knocked at his door and told him of his brother’s arrest.

In the end, he will be remembered as Whitey Bulger’s loyal brother. Because that’s the way he wanted it.