Urban farms do more harm than good to the environment 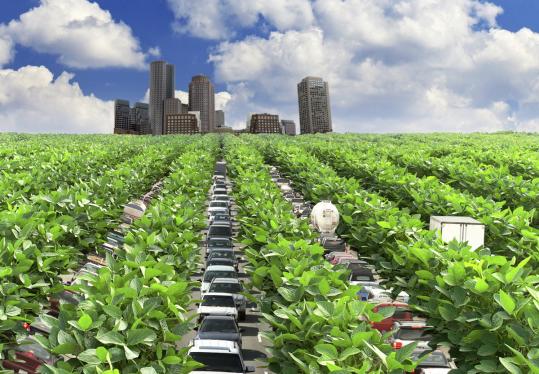 ALL THAT is grassy is not green. There are many good reasons to like local food, but any large-scale metropolitan farming will do more harm than good to the environment. Devoting scarce metropolitan land to agriculture means lower density levels, longer drives, and carbon emission increases which easily offset the modest greenhouse gas reductions associated with shipping less food.

Last year, I chaired the Citizen’s Committee for the Future of Boston, and our report endorsed urban vegetable gardens. Super-chef and committee member Barbara Lynch emphasized the educational value of letting children see food grow and I agreed with her. I share the locavore view that local food tastes better (especially oysters), and that there is something wonderful about eating something you’ve grown yourself.

But while neighborhoods benefit from the occasional communal garden, it is a mistake to think that metropolitan areas could or should try to significantly satisfy their own food needs. Good environmentalism is smart environmentalism that thinks through the total systemic impacts of any change. Farm land within a metropolitan area decreases density levels and pushes us apart, and carbon emissions rise dramatically as density falls.

In 2008, two Carnegie Mellon researchers analyzed the reduction in carbon emissions that might come from moving to local food. They found that American food consumption produces greenhouse gas equivalent to 8.9 tons of carbon dioxide per household per year. Food delivery represents .4 tons of that total; all agricultural transportation up and down the food chain creates one ton of carbon dioxide per household annually.

We must weigh the environmental benefits from shipping less food against the environmental costs of producing and storing local food in a state that doesn’t exactly have ideal conditions for every kind of produce. One recent UK report found that the greenhouse gas emissions involved in eating English tomatoes were about three times as high as eating Spanish tomatoes. The extra energy and fertilizer involved in producing tomatoes in chilly England overwhelmed the benefits of less shipping. Even New Zealand lamb produced less greenhouse gases than English lamb. Berkeley graduate student Steven Sexton estimates that an American switch to more local corn production would require 35 percent more fertilizer and 22.8 percent more energy.

The National Highway Travel Survey teaches us that when densities drops in half, holding fixed location within the metropolitan area, households buy about 107 gallons more gas per year. If halving densities also doubled distance to the metropolitan area center, this would add an extra 44 gallons of gas annually. Together, the increased gas consumption from moving less than a tenth of agricultural farmland into metropolitan areas would generate an extra 1.77 tons of carbon dioxide per year, which is 1.77 times the greenhouse gases produced by all food transportation and almost four and a half times the carbon emissions associated with food delivery.

It is implausible to imagine anything like an extra .24 acres of farm land per person in metropolitan America, but smaller land changes will also have commensurately smaller reductions in the greenhouse gas emissions from shipping food. If just a twentieth of an acre of metropolitan farm land per person could (implausibly) eliminate half of food delivery emissions, this would typically be associated with 41 more gallons of gas per household. Those driving-related greenhouse gas increases would be 2.4 times higher than the emissions savings from reduced food transport.

The connection between higher density living and less energy use is strong. Urban farms mean less people per acre which in turn means longer drives and more gasoline consumption. Shipping food is just far less energy intensive than moving people. If the First Lady wants to help the environment, she should campaign for high rise apartments, rather than plant vegetables.