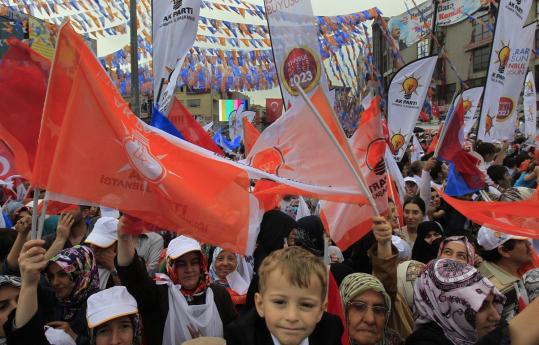 Supporters of Prime Minister Recep Tayyip Erdogan (below) cheer during an election rally in Istanbul. (Reuters)
By Stephen Kinzer June 14, 2011

SUNDAY’S ELECTION in Turkey was another reminder of the country’s astonishing rise, which has been one of the most dramatic geopolitical stories of the last decade. For the first 80 years of its existence as a nation, Turkey was dominated by generals and played almost no role in the world. Now it is a vibrant democracy and a major force in the Middle East, the Caucasus, North Africa, the Balkans, and beyond.

The election was a triumph for Prime Minister Recep Tayyip Erdogan, who has presided over his country’s remarkable transformation. His party won more votes than all other parties combined, making him the first Turkish prime minister in more than half a century to win three consecutive terms. He will naturally be tempted to take this victory as a mandate to charge ahead with his own projects. Instead he should do the opposite: curb his divisive rhetoric, adjust his authoritarian style, and seek broad support for projects that will strengthen Turkey and help calm the world’s most volatile region.

Syrians who are racing toward Turkey in search of refuge represent Erdogan’s most immediate challenge. Turkey has become not just a safe haven, but a model for what many Arabs would like to see their countries become. This model — a government with roots in Islam but also committed to democracy, free enterprise, and good relations with Europe and the United States — represents the dream of millions of Tunisians, Libyans, Egyptians, Yemenis, Syrians, Jordanians, and Palestinians.

Finding a way to stabilize the ever-more-turbulent Middle East is Turkey’s most urgent task. Erdogan is obsessed with his drive to make Turkey one of the world’s 10 biggest economies (it is now 17th). This will only be possible if the Middle East is peaceful and open for business.

Besides dealing with upheaval in the Arab world, Turkey faces three other key foreign policy challenges. First is the continuing division of Cyprus between ethnic Greek and Turkish sectors. Second is the frozen conflict with Armenia, which seemed to be on the brink of resolution until Turkish and Armenian nationalists killed a promising agreement reached by both countries two years ago. Erdogan’s new mandate gives him the power to overrule militants in his ranks. If he does, and if Armenian leaders can do the same, the entire region will benefit.

Third is to rebuild relations with Israel. Erdogan has become a hero in the Middle East for his forthright denunciations of Israel’s occupation of the West Bank and its blockade of Gaza. Like many Turks, he is still enraged over the murder of nine Turkish civilians by Israeli commandos who stormed a freighter bearing relief supplies for Gaza last year. His anger may be justified by the facts, but he should realize that a resumption of Turkey’s good ties to Israel could be a decisive step toward Middle East peace.

Foreign policy challenges are only part of Erdogan’s post-election agenda. He also needs to deepen Turkish democracy. That would require resolving the decades-old Kurdish conflict and taking concrete steps to reassure secular Turks that their country is not moving toward religious rule.

Turkey’s grand project in the next couple of years will be writing a new constitution to replace the one imposed by generals three decades ago. Erdogan wants to replace the current parliamentary system with one built around a strong president and then run for the presidency himself. His party did not win enough seats in Parliament to impose a constitution on its own, so if he wants to make such a radical change, he will have to propose a constitution that represents a national consensus. That can only be reached if the constitution includes strong guarantees of free speech, rights for women, judicial independence, and cultural freedom for all ethnic and religious groups.

Such a constitution would embody the wishes of most Turks. It might also reinvigorate Turkey’s stalled campaign to join the European Union. If Turkey becomes an EU member by the time it celebrates its 100th anniversary in 2023, that would be Erdogan’s eternal legacy.

Turkey is poised to become one of the most successful countries of the 21st century, a model of Muslim democracy and a powerful force for regional peace. Whether it will fulfill its potential depends largely on how Erdogan handles the mandate he has just won.