The state loses if it gives subsidy to video game makers 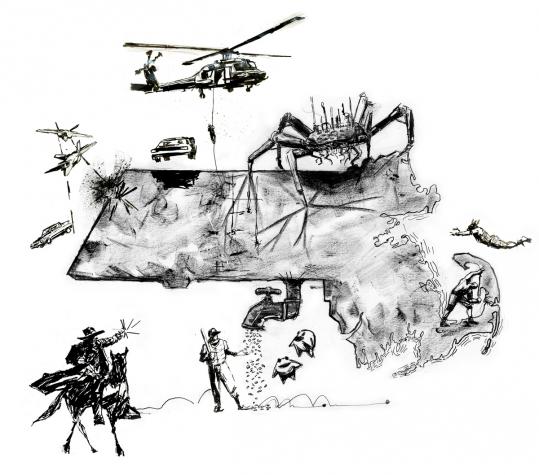 SO NOW it’s the video game industry that wants to be bribed to do business in Massachusetts.

The Globe reports that local game developers are lobbying Beacon Hill for subsidies that would make them more competitive against out-of-state rivals. Companies such as Demiurge Studios of Cambridge and Turbine Inc. in Needham are angling for tax breaks to help Massachusetts companies recruit and hire experienced game designers, and turn the state into an industry stronghold.

A bill to subsidize video-game makers with tax incentives has been introduced by Representative Vincent Pedone of Worcester, who is promoting it as a can’t-lose bet for the treasury. “For a fairly small investment,’’ says Pedone, “we have the potential of grasping billions and billions of dollars of additional revenue.’’ His legislation, he insists, will “make Massachusetts the hub of the universe for video game design.’’

For years the state has played this sucker’s game of allocating financial benefits — grants, credits, and other tax breaks — to politically favored companies and industries. And for years hapless taxpayers have seen their dollars squandered to enrich firms that slashed employment instead of growing it, or funneled into unneeded “incentives’’ for development that would occur even without a penny of state money.

Beacon Hill’s confidence in its ability to successfully pick marketplace winners and losers is boundless. So is its inability to grasp that it cannot confer any financial benefit on X without imposing a simultaneous financial cost on Y. No matter how often state government bets wrong, ladling taxpayer-funded goodies to industries that don’t fulfill their boosters’ rosy predictions, bureaucrats and politicians remain convinced that gambling with public funds is good policy.

Faith in the wisdom of doling out lucrative tax breaks to privileged businesses wasn’t daunted when announced in January that it was laying off more than 800 employees and shutting its “green energy’’ plant in Devens — a plant it had built with more than $30 million in state subsidies, and the promise of nearly $30 million more.

Similarly, Fidelity Investment’s steadily shrinking commitment to Massachusetts hasn’t endangered the targeted tax benefits that have saved mutual-fund companies an estimated $1.7 billion over the past 15 years. In March, Fidelity announced plans to close its offices in Marlborough and move most of the 1,100 jobs there out of state. Those tax benefits were originally adopted so the mutual-fund industry would keep enlarging its Massachusetts workforce. Yet the number of people Fidelity employs in Massachusetts is plunging — from 13,000 workers in 2006 it will have fallen to only 7,300 by the end of next year.

There is no compelling justification for the commonwealth’s $100-million-a-year subsidy for the film industry, much of which merely underwrites the salaries of rich Hollywood actors. “All the evidence shows that this is a very costly tax credit with minimal economic impact,’’ Michael Widmer, president of the Massachusetts Taxpayers Foundation, testified in March. The few hundred new, mostly short-term, jobs attributable to the film subsidy in 2009, Department of Revenue data confirm, paid an average salary of $51,000. Each one cost the state more than $170,000.

Targeting tax credits to politically wired special pleaders is terrible public policy. It reinforces the false idea that government is competent to decide which economic activities to nurture. State officials should not be trying to game the market for the benefit of industries it deems glamorous or cutting-edge or most likely to succeed. If they are persuaded that lower taxes would be good for the film industry — or for solar energy or biotech or financial-services — then it’s a pretty good bet that lower tax rates would be good for business, period.

Tax-code favoritism breeds corruption. It substitutes the judgment of millions of consumers in an open market with those of political officials and the special interests that seek their favor. Video-game developers who see the largesse showered on certain industries can hardly be faulted for wanting some for themselves. “Wherever there is a trough,’’ wrote the Russian poet Alexander Pushkin, “there you will find pigs.’’

But slopping pigs isn’t the government’s job. Neither is manipulating the tax code to advantage some businesses over others. If the Massachusetts video-game industry can’t succeed on its own, it shouldn’t go crying to Beacon Hill. No other industry should either.

Jeff Jacoby can be reached at jacoby@globe.com and followed on Twitter @jeff_jacoby.