Too soon to indict Khadafy

Human rights cause best served by limiting his time in power 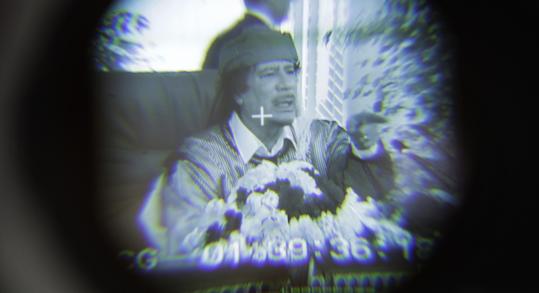 Libyan Leader Moammar Gadhafi is seen through a television camera viewfinder as he speaks in Tripoli, Libya, in March. (Associated Press)
By Juliette Kayyem June 6, 2011

THE RECENT arrest of Ratko Mladic for the slaughter of 8,000 Bosnian Muslims in the 1990s was powerful evidence of an emerging global consensus that those who commit heinous crimes will be found and punished, no matter how long it takes.

Now, defenders of multilateral institutions, like the International Criminal Court, are turning to arrest warrants that Chief Prosecutor Luis Moreno-Ocampo has sought against Libyan leader Moammar Khadafy and his allies as another significant move in defense of human rights.

Consistency, however, may not be a good thing. Mladic was a man in hiding; we still need something from Khadafy.

Its always difficult being critical of any institution created to defend human rights. But it may be a little premature for international justice in Libya. As the NATO military effort enters its third month, the International Criminal Court’s pursuit of justice threatens to undermine whatever options may still exist to convince Khadafy to end his reign. The greater cause of human rights would be best served by limiting Khadafy’s time in power. Until his reign is over, lawyers should stand down.

The effort to get rid of Khadafy is a military and diplomatic one now; indeed, the Obama Administration’s silence on the indictments indicates just how complicated the ground game is. If the court’s indictments were merely symbolic, then they could be easily ignored. But, they are also risky and unnecessary. While the court certainly hopes that the indictments will make Khadafy’s allies turn on him and turn him in, they were issued in the midst of a tenuous military and complicated diplomatic effort. And they will surely complicate it further.

Militarily, the NATO effort is a limited agreement among disparate partners. It is unlikely that Russia, China, or the Arab League will expand the UN mandate to require governments to enforce the court’s arrest warrants; they barely support the NATO effort anymore. The United States, Russia, China, India, and all Middle Eastern countries, including Libya, do not recognize the court’s jurisdiction. While the indictment may give moral imperative to NATO’s cause, it can’t require nations to bring the accused into custody.

In addition, nations of the Arab League, whose support of NATO’s military mission was necessary, have historically viewed the International Criminal Court as an arm of Western imperialism. The league has supported Sudan’s President Omar al-Bashir, despite the court’s arrest warrants against him for atrocities in Darfur. Arab League nations are also potential safe havens for Khadafy, and may be more willing to do so without an international arrest warrant lingering over his head. In any case, NATO simply can’t afford to lose the Arab League’s military support over legal debates about the court’s jurisdiction.

Diplomatically, both South African President Jacob Zuma and Russian President Dmitri Medvedev have shown some leadership in trying to persuade Khadafy to exit immediately. Perhaps a safe haven in Saudi Arabia, Venezuela, or any of those African countries that have survived on Libya’s petrodollars and consider Khadafy a friend may oblige him with a place for retirement.

And, of course, Khadafy isn’t the only strongman clinging to power. The American goal in Syria and Yemen — just like Libya — must be to convince authoritarian leaders that, absent significant internal reforms, they must go. The indictments against Khadafy not only threaten to undermine a potential exit strategy for him, but may also give other Arab leaders more incentive to fight till the end.

Syrian leader Bashar Assad is likely looking at his options in the absence of any semblance of democratic reform: Stand down and suffer the fate of Hosni Mubarak and his family who are set to go on trial in Egypt — or fight with a shocking ruthlessness against his own people. Convincing Assad to leave and find a another country to live in is more difficult with the threat of a potential international criminal indictment hanging over his head.

For those who support international institutions, the indictments — with no enforcement capability — also threaten to make the International Criminal Court itself seem weak at best, irrelevant at worst. Libyans, and the people of the Arab world, would certainly be better off without Khadafy. Maximizing his exit strategy — in spite of our desire for justice — must be our, and the court’s, priority.

Juliette Kayyem can be reached at jkayyem@globe.com or Twitter @juliettekayyem.