BC should hand over Irish archive tapes 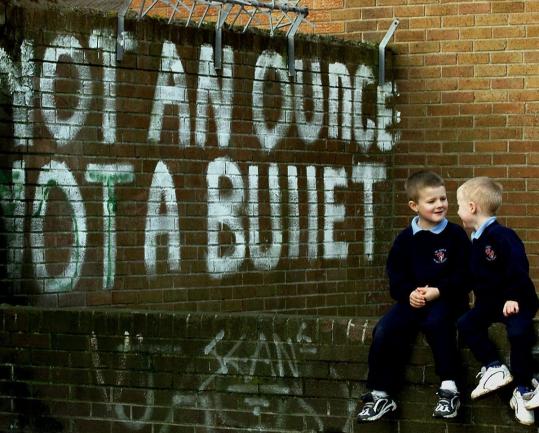 HOW DO you get old agitators to talk? Ed Moloney, the director of the Irish oral history project at Boston College, knew how: Find aging participants of the war in Northern Ireland, have them sign a confidentiality agreement, and let them chat away under an agreement that kept their words hidden until they died.

But nobody bothered to tell the participants that their disclosures may not survive a subpoena. Federal authorities, at the request of the Northern Ireland police, are now interested in disclosures in the tapes concerning unsolved murders and political figures.

The controversy has many urging BC, the custodian and host of the project, to fight back or even, as Moloney suggests, burn the remaining tapes in the name of academic freedom. BC has played an essential role as a trusted broker in the Northern Ireland conflict. So it would be a disservice to Irish studies overall for the university to expend too much capital defending the project.

The project managers may in some respects be the victims of inexact academic norms when it comes to narrative research. Universities have long struggled over how to address standards of research involving human subjects. The history is not pretty. At the end of WWII, the Nuremberg trials exposed a line of defense from Nazi physicians who forced prisoners to undergo appalling and inhumane procedures in the name of clinical research. Federal standards were established to protect the fundamental rights of scientific research subjects. Now, where subjects are utilized in research, institutional review boards are convened to ensure that the researcher is honest with his subjects.

Over the years, these standards expanded to cover the social sciences as more and more academic institutions began to demand some oversight over the liberal arts. The Oral History Association balked at the notion, arguing in a 2003 statement that the nature of oral history does not lend itself to formalistic review. BC spokesman Jack Dunn confirmed that their decade-old oral history project was never reviewed by the board.

Much can be learned from oral history, especially in secret worlds such as terrorism, gangs, and drug cartels. By Moloney’s own admission, the interviews were intended to produce as much information as possible; to tell the participants that the law could get involved meant that the project “would have never gotten off the ground.’’

That may or may not be true, but this is where Moloney made two errors. First, the interviewees were clearly not told that their interviews might be subject to legal inquiry. Oral history may be a unique form of academic research, but well-known standards require notification that confidentiality cannot override a subpoena.

Second, Moloney chose to publish “Voices from the Grave,’’ a narrative by two subjects who had already passed away. The damning allegations in the book, however, are about living people and ongoing investigations. Had Moloney thought through the implications of publication, he would have altered the names and identifying features of those still living.

That the confidentiality agreement is sacrosanct because it involves the history of war in Northern Ireland is a romantic and dangerous defense. Terrorist organizations kill innocent victims; it’s what defines them. Replace IRA with Hamas and we wouldn’t be having this theoretical debate. Among the incidents the police are investigating is the 1972 death of a widowed mother of 10.

BC is now seeking more clarity from the US Attorney’s office about the scope of the request. Little will be gained by a drawn-out fight in court. BC should hand over the specific tapes requested and, in the future, require greater oversight and transparency on research projects implicating criminal conduct.

BC would have been well positioned to assist the parties had they chosen to absolve guilt through a truth and reconciliation initiative. But BC cannot impose reconciliation. A sovereign nation now seeks information about their unsettled murders and disappearances.

The old adage publish or perish has a new meaning for the college. In the future, it should do neither.

Juliette Kayyem can be reached at jkayyem@globe.com.