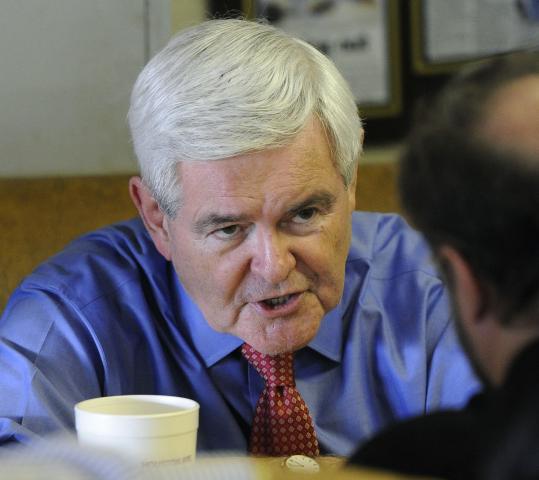 Newt Gingrich says his “food-stamp president’’ comment was taken out of context. (Associated Press)
By Jeff Jacoby Globe Columnist / May 22, 2011

RACIAL MCCARTHYISM is alive and well in Barack Obama’s America, where reckless liberals hurl baseless charges of racism at critics of the nation’s first black president. Remember ex-president Jimmy Carter attributing “an overwhelming portion’’ of the fervent opposition to Obama’s health care bill to “the fact that he is a black man’’? Or actress/activist Janeane Garofalo smearing the Tea Party phenomenon as being “about hating a black man in the White House. . . racism straight up’’? Or for that matter Obama himself, predicting that Republicans would demonize him because “he doesn’t look like all those other presidents on the dollar bills’’?

Last week, it was David Gregory’s turn to play the race card. The host of NBC’s “Meet the Press’’ accused Newt Gingrich of having used “coded, racially tinged language’’ when he described Obama as a “food-stamp president’’ a few days earlier.

In reality Gingrich hadn’t made anything like a racially tinged remark, coded or otherwise. He had simply given his stump speech to a Republican audience in Georgia, during which he criticized Obama’s limp economic record in these words:

Gregory played a video clip of that passage from Gingrich’s speech, then demanded that the former speaker explain its supposed racial subtext. Gingrich couldn’t believe Gregory was serious — “Oh, come on, David! That’s bizarre, this kind of automatic reference to racism.’’ He pointed out that what he had said “is factually true: 47 million Americans are on food stamps. One out of every six Americans is on food stamps. And to hide behind the charge of racism!?’’

You have to be tuned to a remarkably subtle frequency to detect racial animus in Gingrich’s comment — the same frequency, perhaps, at which adjectives like “skinny,” “arrogant,” and “articulate” turn into racist epithets. Granted, Gingrich himself has sometimes played fast and loose with racial pejoratives; when Sonia Sotomayor was nominated to the Supreme Court, he took to Twitter to tag her a racist. But he’s innocent this time.

The more-food-stamps-vs.-more-paychecks theme is one that Gingrich has been pushing for nearly a year. In memos last summer and fall, he urged Republican candidates to point out that the use of food stamps — “a key metric in gauging the health of the American economy’’ — was going through the roof. When Congress was controlled by Republicans in the 1990s, he wrote, unemployment and food stamp usage plummeted. By contrast, “the Pelosi-Reid Democratic Congress’’ had led to rising joblessness and food-stamp rolls. The statistics he laid out had nothing to do with the president’s color — he hardly mentioned Obama — and everything to do with contrasting “the Democratic Party of food stamps’’ with “the Republican Party of paychecks.’’

Now Gingrich is running for president, so he has adapted his food-stamp argument accordingly. But the underlying message is no more racial today than it was last August. It’s the Democratic and Republican attitudes toward welfare vs. work that Gingrich is spotlighting. Not Obama’s race.

Food stamp use is at an all-time high. In February, the most recent month for which federal data is available, 44.2 million people — one American in seven — were getting food stamps. (Gingrich slightly misstated the numbers on “Meet the Press.’’) On Obama’s watch, the number of recipients has soared by more than 12 million, setting a new high every month.

But they soared on George W. Bush’s watch as well. The number of food-stamp users went up in seven of the eight Bush years, climbing from 17.3 million in 2001 to 28.2 million in 2008 — a 63 percent leap. Indeed, the Bush administration led a campaign to dramatically expand and destigmatize the use of food stamps, a campaign that began before the recession did. If Obama has been “the most successful food-stamp president in American history,’’ it is only by continuing what his predecessor began.

The Bush record certainly seems to contradict Gingrich’s message about Democrats being the party of food stamps, and “Meet the Press’’ would have been a good venue to ask about that contradiction. Did David Gregory really think it more important to go after a bogus racial “gotcha?’’

Jeff Jacoby can be reached at jacoby@globe.com or on Twitter: @jeff_jacoby.