THIS STORY HAS BEEN FORMATTED FOR EASY PRINTING
Bill Sargent

Flood could be economic catastrophe but an ecological boon 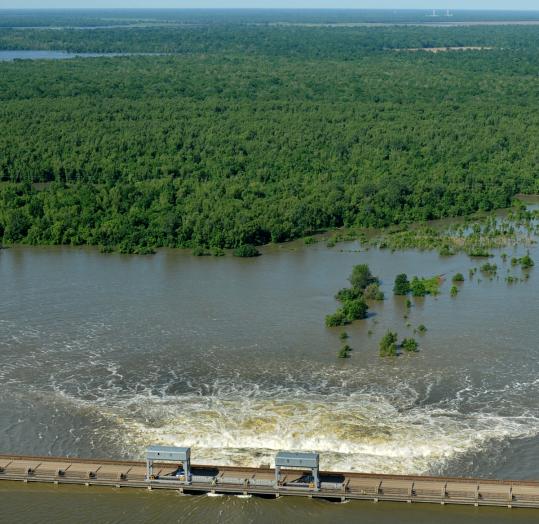 Water flows through open gates of the Morganza spillway into the Atchafalaya River basin last Sunday. (Associated Press)
By Bill Sargent May 20, 2011

THE UNITED States has made a bet that it can beat Mother Nature, and we will soon see if the gamble has paid off.

The Army Corps of Engineers is trying to slowly and carefully bleed the overflow of the Mississippi River to the Atchafalaya River basin. So far a water flow that is more intense than the flow of Niagara Falls is bursting through the Morganza Spillway. If the Corps succeeds, it will save New Orleans and Baton Rouge from worse flooding than occurred after Hurricane Katrina. If it fails, both cities would be left without a river, which would cripple America’s shipping and petrochemical industries for the foreseeable future. But, long-term, the flooding could lead to a more sustainable way of dealing with problems along the Louisiana coast.

For thousands of years the Mississippi has shifted its course, building up successive deltas along the southern Louisiana coast. It wants to follow its natural course and flow down the Atchafalaya River Basin. But for the past 300 years, the United States has built levees to constrain the river, and now it shoots its valuable sediments far out into the depths of the Gulf of Mexico rather than allowing them to build up protective marshes.

During the late 1950s, the Mississippi surged west and developed an oxbow curve, now called the Old River, that flowed into the Atchafalaya. The Corps then built the Old River Control Structure to prevent the two rivers from fully merging. Today the equivalent water flow of seven Niagara Falls tumbles over the Old River Control Structure and an armed gunboat patrols the waters to make sure an errant barge does not break lose or a terrorist doesn’t attempt to bomb the vulnerable facility.

The Corps also built the Morganza Spillway south of the Old River Control Structure. It is now trying to slowly increase the flow of water through the spillway to take pressure off the levees in New Orleans as well as the dam of the Old River Control Structure. The last time this system was tested was in 1973, when it almost failed. If it fails this time, the Mississippi would come cascading down through the Atchafalaya Basin

Although it would be a devastating economic blow to New Orleans and Baton Rouge, this would also be in the best long-term ecological interests of the area. The Mississippi sediments, which now spew uselessly into the Gulf of Mexico, would start to rebuild the marshes that could protect the soft underbelly of Southern Louisiana.

Marshes are nature’s way of protecting coasts from hurricanes. Every mile of marsh tampens down storm surges from hurricanes by a foot. If the marshes of southern Louisiana had been allowed to grow naturally, New Orleans would not have been flooded by Katrina. Coastal scientists are watching to see if this crisis will start to lead to a less-costly and more sustainable way of dealing with the problems of coastal Louisiana.

Bill Sargent, a Nova consultant, is author of more than a dozen books. His latest is “The Well From Hell: The BP spill and the Endurance of Big Oil.’’