Bin Laden’s death does not warrant the use of torture 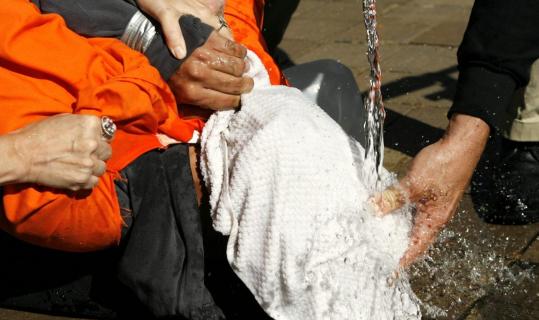 Demonstrator Maboud Ebrahimzadeh is held down during a simulation of waterboarding outside the Justice Department in Washington. (Reuters)
By Jeff Jacoby Globe Columnist / May 11, 2011

WHEN US Representative Steve King learned that Osama bin Laden had been killed by US troops in Pakistan, he couldn’t resist a little crowing about the efficacy of torture. “Wonder what President Obama thinks of water boarding now?’’ the Iowa Republican tweeted on May 2.

It was an outrageous remark, but King wasn’t going out on a limb. A parade of others, mostly Republicans, have joined him in claiming that the death of bin Laden had vindicated the use of waterboarding — the most notorious of the “enhanced interrogation techniques’’ the Bush administration employed to extract information from senior Al Qaeda detainees.

On the Senate floor, for example, Georgia’s Saxby Chambliss called the bin Laden killing “one of the clearest examples of the extraordinary value’’ of the CIA’s interrogation practices, while former Bush staffer Marc Thiessen wrote in a Washington Post column that Obama should award the Presidential Medal of Freedom to the interrogators who waterboarded Khalid Sheikh Mohammed into cooperating with US intelligence agents.

US Representative Peter King of New York, the House Homeland Security chairman, told Fox News Channel’s Bill O’Reilly that waterboarding loosened the first crucial detail in tracking down bin Laden. “And so for those who say that waterboarding doesn’t work, to say that it should be stopped and never used again — we got vital information which directly led to us bin Laden.’’ When candidates in the Republican presidential debate in South Carolina last Thursday were asked whether they would “support a resumption of waterboarding,’’ three of them raised their hands to lusty audience applause.

I don’t know whether waterboarding was indispensable to rolling up bin Laden; for every interrogation expert who says it was, another expert argues the opposite. But the case against waterboarding never rested primarily on its usefulness. It rested on its wrongfulness. It is wrong when bad guys do it to good guys. It is just as wrong when good guys do it to Al Qaeda.

Some Americans have convinced themselves that waterboarding is closer to “a dunk in water’’ than to genuine torture. In fact, it is an agonizing, terrifying form of abuse. “The victim experiences the sensations of drowning: struggle, panic, breath-holding, swallowing, vomiting, taking water into the lungs and, eventually, the same feeling of not being able to breathe that one experiences after being punched in the gut,’’ Evan Wallach, a former JAG who teaches the law of war at the Brooklyn and New York law schools, wrote in 2007. “The main difference is that the drowning process is halted . . . It can cause severe psychological trauma, such as panic attacks, for years.’’ There was good reason why waterboarding was one of the war crimes for which Japanese officers were hanged after World War II.

Torture is unreliable, since people will often say anything — invent desperate fictions or diversions — to stop the pain or fear. That doesn’t mean waterboarding will never yield valuable information. Feeding a detainee into an industrial shredder, as Saddam Hussein’s torturers sometimes did, might yield valuable information too. But some techniques are forbidden not because they never work, not because they aren’t deserved, but because our very right to call ourselves decent human beings depends in part on our not doing them.

Like chemical and biological warfare, torture is something we refuse to engage in, despite its potential effectiveness, on the grounds that it is fundamentally immoral and uncivilized. Our repudiation of torture is absolute — the international Convention Against Torture, ratified by the United States in 1994, allows for “no exceptional circumstances whatsoever.’’ That unconditional repudiation is one of the lines that separates us from the barbaric jihadists with whom we are at war.

The killing of bin Laden was gratifying, but it was no vindication of torture. Republicans rightly argue that much credit is owed to George W. Bush, who launched an effective war on terror and pursued it with fierce resolve. But Bush was wrong to permit waterboarding, and wrong to deny that it was torture. I don’t agree with Obama on much, but when it comes to waterboarding, he is right. America will defeat the global jihad, but not by embracing its most inhuman values.