More indignation over Wall Street, but no action 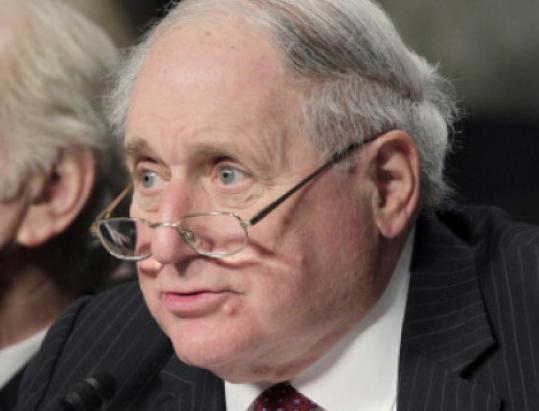 CARL LEVIN may talk tough, but nothing he says will scare Wall Street — which, despite widespread condemnation, never seems to change its ways.

Levin, a Michigan Democrat, co-chairs the Senate Permanent Subcommittee on Investigations, which last week released a 650-page report on the financial crisis that drove America into recession. Levin describes the problem in scorching terms: “an economic assault that cost millions of Americans their jobs and homes, while wiping out investors, good businesses, and markets.’’ He argues that financial firms took advantage of investors and that regulators “sat on their hands instead of reining in the unsafe and unsound practices all around them. Rampant conflicts of interest are the threads that run through every chapter of this sordid story.’’

Yet this heated rhetoric does not translate into action. All the report ended up recommending was that federal regulators be more alert for high-risk lending, inflated credit ratings, and illegal trading.

Meanwhile, the sordid story continues. State Street Bank is getting an $885 million tax refund despite $1.6 billion in profits, two years after getting a $2 billion bailout and shedding 3,600 jobs since 2008. Compensation for the CEOs of , , , , BB&T, and all went up at least 39 percent. The New York Times last month reported that CEO Brian Moynihan made $10 million in 2010 even though the bank lost $3.6 billion. Chase’s Jamie Dimon made $20.8 million, surpassing the $17.5 million of 2009. Back in 2009, the newly inaugurated President Obama called such salaries in the midst of the recession “the height of irresponsibility.’’

In a separate announcement the same day as Levin released his report, the Comptroller of the Currency and the Federal Reserve issued “enforcement actions’’ against mortgage servicers that rushed untold American families into foreclosure, including JPMorgan Chase, Bank of America, MetLife, Citibank, PNC, , U.S. Bank and . An interagency review that also included the Federal Reserve System found that those companies and other mortgage servicers engaged in “unsafe and unsound practices and violations of applicable federal and state laws.’’ While more restrained in its language than Levin, the report said the practices “compromised the public trust.’’

But already, those banks have clearly been let off the hook. What the comptroller and the Federal Reserve call “enforcement’’ amounts to consent agreements in which the companies neither admit nor deny wrongdoing. Moreover, the punishment is merely bureaucratic: The companies are expected to put together compliance committees and submit action plans.

Granted, the Federal Reserve announced it will eventually pursue monetary penalties, but who is kidding whom? Executives cannot possibly be fearing a whole lot when CEOs are again showering themselves with massive raises. And Wall Street culture has returned to what The New York Times has characterized as “updated exuberance’’: $4,000 bottles of vintage Bordeaux, summer rentals in the Hamptons for more than $400,000, and toga-esque holiday and birthday parties headlined by hip-hop stars.

There is no one left with heft in Washington to call the new exuberance a new height of irresponsibility. You can count out Obama, who neutered his former outrage to the point that, last year, he praised Dimon and Goldman Sachs chief Lloyd Blankfein as “savvy businessmen.’’ Then he made Bill Daley his new chief of staff. Daley was a top executive of JPMorgan, pulling down $8.7 million last year.

The probable reason there were no serious calls for punishment for past actions from Levin’s subcommittee is that a majority of its members — not including Levin but including Massachusetts Senator Scott Brown — have been among the top 20 senatorial recipients of securities- or banking-industry campaign contributions since 2008, according to the Center for Responsive Politics.

The result is more rhetoric than actual reform. After two years of investigation, Levin said his staff “found a financial snakepit rife with greed.’’ But neither he nor the White House nor the regulators show any sign of jumping into the pit to kill the snakes.