A ‘yes’ man for the mayor’s city 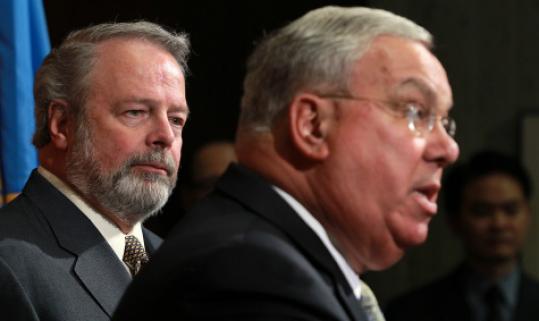 PETER MEADE is a “Hub fixture’’ — sort of like a cozy, old lamp that gets taken in and out of storage and moved from room to room.

A been-there, done-that, go-to guy, he has been a radio talk show host, a public relations man, and a member of assorted civic boards. Over the past six years, Meade moved from head of corporate affairs at Blue Cross and Blue Shield of Massachusetts to chair of the Rose Fitzgerald Kennedy Greenway Conservancy to president and CEO of the Edward M. Kennedy Institute.

To understand what Meade’s newest job title really means, consider this account of the press conference called to announce his nomination. When Meade was asked why he would return to Boston City Hall — where he worked 34 years ago for another mayor — his new boss interrupted and answered the question. “Me,’’ Menino said.

He’ll be saying that a lot as BRA director.

For better or worse, Boston development is all about “Me,’’ the mayor who is well into his fifth term. As defined by “Mayor Me,’’ the development director’s job means carrying out his wishes. Given what is euphemistically described as Menino’s hands-on style, it makes sense for him to pick a Hub fixture who knows his wishes and will carry them out. It also helps that Meade knows the other Hub fixtures.

They are all part of what David D’Alessandro delighted in referring to as “this aquarium we call Boston’’ when he was CEO of John Hancock Financial Services. A decade ago, D’Alessandro was describing a town in which the same fish swim endlessly around in circles. Long after he sold Hancock to a Canadian insurance giant, many of the same fish are still gliding around the sometimes murky waters. Meade is one of them. He and others thrive because Menino is still the big sea turtle floating at the top of the tank.

This local aquarium is filled with decent people who love Boston. They also love being big fish in a small metropolis that, every day, feels like it’s shrinking. The sensation of glass walls closing in has nothing to do with population. It’s the byproduct of the years of out-of-town gobbling up of banks, retailers, and insurance companies. The new Boston has better restaurants, but fewer Boston-based CEOS. Today, corporate Boston’s biggest players run nonprofits or own sports teams.

It’s claustrophobic and incestuous at every intersection of business and politics, and especially where City Hall meets economic development.

A mayor for life comes with an entourage for life. Menino’s entourage encompasses a circle of developers and consultants whose projects routinely win approval. Those relationships fueled the building of towers, hotels, and condominiums. When Menino last ran for reelection, The Globe identified six developers who built 1 out of every 4 square feet constructed by private developers since 1996. The mayor’s cadre of favored developers included partners James G. Keefe and Patrick Lee, Anthony Pangaro, Joseph Fallon, Steven Samuels, Edward Linde, and Edward A. Fish. Between them, they developed, as the Globe put it, “9 million square feet of glass and steel and concrete, the equivalent of five John Hancock towers.’’

The boom years are history for now. Menino — and Meade, as his latest development alter ego — must deal with challenges associated with an economic downturn and its aftermath. Will Downtown Crossing and the Greenway be eternal dead spots, or can they be energized? That takes a new perspective, and if not new eyes, at least old eyes willing to look at those sites in a fresh way. Will the favored circle of developers ever break open to give others a hearing when it comes to building Boston’s future? That means considering the possibility of getting to yes with developer Don Chiofaro, instead of starting off with no.

A Hub fixture like Meade brings institutional memory, and a deep knowledge of where Boston has been. Getting it somewhere new takes more than moving around the furniture. It means lighting the way, not just providing background illumination.