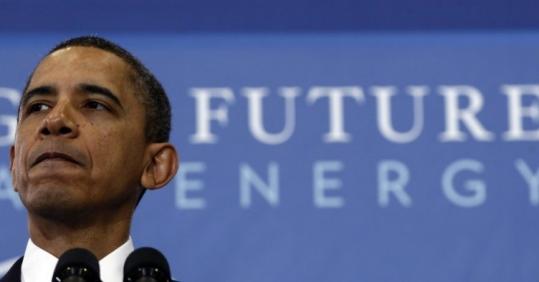 PRESIDENT OBAMA seems increasingly drained of the juice needed to power up a modern vision on energy. Completely absent from his address this week at Georgetown University was his promise as a candidate to go after windfall profits of oil companies and reinvest the money into wind, solar, and biofuels. Instead, he promised to expedite new shallow and deepwater oil drilling permits, even as top environmentalists say many questions remain after the spill disaster.

More than ever, he is wedded to pursuing “clean coal’’ and nuclear power. Meanwhile, radiation from the Japan nuclear disaster was measured thousands of times above safety levels in seawater and groundwater near the plant and in soil 25 miles away, at levels double those found in areas declared inhabitable around Chernobyl.

Most important, there continues to be no direct message to the American people that we are living in an unsustainable fantasy, consuming a quarter of the world’s energy. There was no hint of things that would instantly make Americans rethink consumption, such as a gas tax. For the moment, the road-blocking Republicans are winning the day with an ethos symbolized by Governor Haley Barbour of Mississippi, a potential presidential candidate. Last week Barbour told Iowa Republicans, “We need more oil. We need more gas. We need more coal. We need more nuclear. We need more American energy.’’

Obama has yet to say that we need less.

“Obama will really have to work for it,’’ said Kelly Sims Gallagher, a professor of energy and environmental policy at Tufts University’s Fletcher School. “So far he has always put energy low on his list of priorities.’’

Gallagher knows a lot about where America’s priorities stand on a global scale. In testimony two weeks ago before the Senate Energy and Natural Resources Committee, she cited Denmark’s goal of 50 percent wind power, Germany’s growing solar collaborations with China, Britain’s taxes on fossil and nuclear energy, and Brazil’s sugarcane ethanol.

Gallagher said such countries are ahead of us in having a comprehensive “portfolio approach’’ of investments. “The US has already ceded a lot of renewables production to other countries,’’ Gallagher said in an e-mail. “It could get it back through consistent, stable, aligned policies. I’m not hopeful. I don’t think the US is that far behind innovation-wise, but the problem is that we are not ‘learning by doing’ as much as we should. The longer that happens, the more we will fundamentally fall behind and then we will be in a catch-up mode.’’

As for the United States, Pew concluded the our “competitive position appears to be eroding.’’ The report said we lag in manufacturing and there is “little indication of any significant policies or incentives’’ to fill the gap after stimulus funds for the clean energy industry that helped push spending to $34 billion expire this year. Echoing Gallagher’s presentation to the Senate, Pew said “capital is sitting on the sidelines,’’ or looking abroad because of “a lack of clarity’’ on US energy policy, which includes “disproportionate government supports for century-old fossil fuel sources.’’

While the United States sits on the sidelines, other nations continue to push ahead. The German Advisory Council on the Environment says that nation can achieve 100 percent renewable energy supply by 2050 without new coal plants or extending the life of nuclear plants. Contrary to Obama’s adoption of the mantra that nuclear energy is less harmful to the environment, the council said nuclear power is “unsustainable’’ and “indefensible’’ because of its waste and that it is a target for terrorism.

That makes Obama’s speech more alarming. Any talk about renewable energy means little until we see a renewal of energy from the president himself.