Artists and residents are discovering a cultural gem in Roxbury 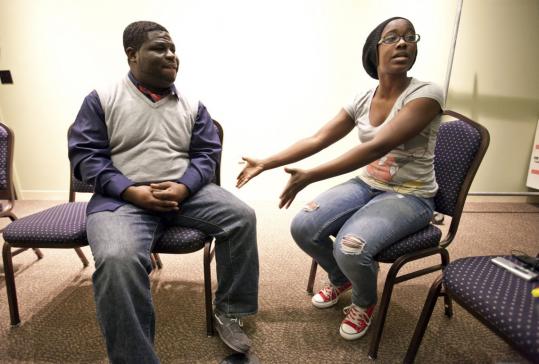 Jermaine Tulloch and Anita Murrell rehearse for the opera “Treemonisha,” which will be held April 29-30 and May 1. (Aram Boghosian for The Boston Globe)
By Lawrence Harmon Globe Columnist / March 27, 2011

YOU CAN’T tell people where to go to have fun, and each night an entertainment exodus takes place from Roxbury and other minority neighborhoods in Boston. Club-goers dart off to the Theater District, jazz aficionados speed away to the South End, and poetry lovers whisk across the river to Cambridge. The get-out-of-town mentality also extends to older, middle-class minority residents who scope out suburban halls for their wedding celebrations, sweet 16 parties, and other events.

The absence of an entertainment district in the city’s black community is starting to grate, especially as the city’s non-white population climbs above 50 percent. Many efforts focus on ways to improve the quality of housing, education, and parks in minority neighborhoods. Entertainment often gets overlooked as a quality-of-life issue and economic driver.

But there is a first-rate performance facility in Roxbury’s Dudley Square, the gateway to the city’s minority neighborhoods. Hibernian Hall is a four-story, paneled brick building that served as a social hall for the city’s Irish population during the first half of the 20th century. The vacant building was purchased in 2000 by Madison Park Development Corporation, an entrepreneurial nonprofit group. Office space occupies the lower floors. But the real draw at Hibernian Hall is the carefully restored 3,000 square-foot grand ballroom with floor-to-ceiling windows, a big stage, theatrical lighting, and integrated sound system.

Some artists and residents are discovering this gem. On a recent Friday night, a rehearsal for the Boston premiere of Scott Joplin’s opera, “Treemonisha,’’ was wrapping up at the same time that DJs were setting up for a big crowd at the Funkadelic Retro Throwback dance party in the grand ballroom. Funkadelic what?

But other nights find just a dozen or so people at jazz supper clubs, poetry readings, and films sponsored by the nonprofit arts group. Black patrons of the arts have yet to adopt the hall. And residents of the area have yet to embrace it as their community arts center. But Bustin, who ran successful community arts centers in Concord and Cohasset, is forging ahead with a full calendar of events.

While the artistic performances must stand on their own, no one should ignore the social significance of the programming at Hibernian Hall. Where else in Boston could 40 vocalists, mostly teens, be close to home while rehearsing and performing an opera by an African-American ragtime composer? And all under the skillful guidance of Opera Boston and Mssng Lnks, a nonprofit group that trains talented minority students for careers in classical vocal music.

Joplin’s storyline isn’t lost on the performers, who stand out from many of their peers, at least in terms of musical taste. Treemonisha, the opera’s heroine, is an educated, 18-year-old black woman who returns to her Arkansas plantation, where she struggles, suffers, and eventually prevails in her attempt to overcome her neighbor’s ignorance and superstition.

Soprano Anita Murrell of Dorchester and countertenor Jermaine Tulloch of Mattapan, both 24, play the leads. They followed similar paths through Boston Arts Academy and the Longy School of Music. Feeling like outcasts in the land of rap didn’t really bother them. The greater challenge is trying to compete with singers who, unlike them, were immersed in classical music and introduced to composers from an early age.

It’s the same challenge faced by those seeking to enliven Dudley Square.

For years, state and local politicians have been promising to boost the area through public investment. Mayor Menino finally looks serious about moving the school department’s headquarters to the area. That should activate the square during the day. The more exciting challenge will be to stimulate night life in Dudley Square by making the area safe and attractive for nightclubs and the most elusive of all businesses in the square — restaurants with table service.

Local government can’t do this alone. Foundations can help through arts grants and by renting space at Hibernian Hall for off-site meetings. But the first and most important step is for more residents in Roxbury to support their community arts center by attending shows and putting Hibernian Hall high on the list for graduation parties and other major family events.