The gamble in Libya

What is the coalition trying to achieve and who are the rebels? 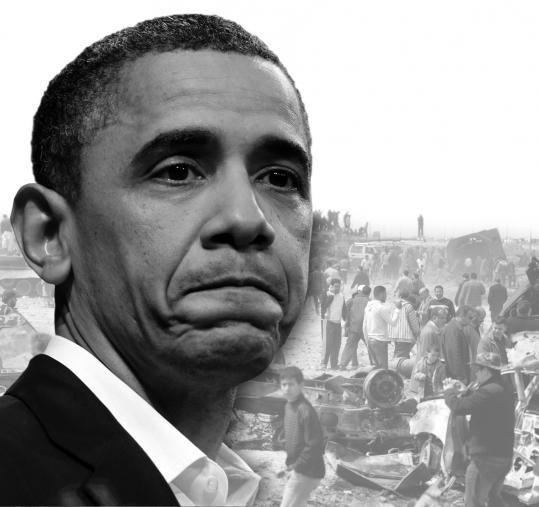 WHATEVER YOU think of President Obama’s sudden decision last week to overturn his initial reluctance to intervene in Libya, the coalition has made a significant, positive difference in changing the direction of this bitter war. The US-led bombing of Moammar Khadafy’s armored units outside Benghazi and missile and radar sites around the country has stopped the Libyan government’s offensive in its tracks. Khadafy is now on the defensive. The rebels have been revived and may soon retake the initiative. This is good news for the Libyan people and for US policy in the region.

Still, Obama and the coalition have gambled in two significant ways that may come back to haunt them.

First, what is the coalition trying to achieve? Is there an agreed-upon mission?

The conflicting US descriptions of what the coalition is trying to do are troubling, to say the least. It is hard to accept the US statements over the weekend that this is a limited campaign to protect Libyan civilians. Not when Obama and Secretary of State Hillary Clinton have also been saying for the past week that Khadafy must go. These are contradictory statements. And that may mean big problems for the coalition down the road. For example, if the rebels retake the military offensive in what now looks to be a protracted conflict, will the coalition agree or decline to provide air support against Khadafy’s forces?

The United States has intervened in a civil war on behalf of one side. It will now be difficult if not impossible to detach ourselves from the rebel cause. This may complicate and limit our freedom of action as the conflict unfolds.

Nothing will be more dangerous to the effectiveness of the coalition’s cause than not agreeing on why we are all there and what we intend to do.

Second, who are the rebels? Do we have any idea of how they might govern should they topple Khadafy? Have we met more than a handful of their leaders and thus have even the most rudimentary understanding of their motives, ambitions, and collective ideology, if one exists?

Obama’s last-minute conversion to save the people of Benghazi and to deny Khadafy a complete victory is commendable. It would have been huge blow to US credibility if we did not act on the Libyan government’s barbarism.

But our intervention is also a decided, strategic gamble because we really have no idea whether a rebel-led government would be our friend or foe. Is it likely to be Islamist or moderate?

We have to recognize this situation for what it really is — the first time in American history when we have used our military power to prop up and possibly put in power a group of people we literally do not know. This may have been necessitated by the higher priority of blocking Khadafy, but it is troubling and potentially problematic nonetheless.

A final point: Obama insisted on French and British leadership and Arab participation in the military effort. That is an understandable reaction to the perceived unilateralism of the Iraq war that began eight years ago this month. This much more international campaign, backed by a brilliantly negotiated and surprisingly aggressive UN Security Council resolution, will be needed as times get tough in the weeks ahead.

But it is unlikely the coalition will succeed if the United States takes a conscious back seat and turns control over to France and Britain. Despite the relatively impressive military capacities of both countries, which I saw firsthand at NATO in the last decade, I don’t believe they can guide the coalition to victory without substantial help from the United States.

Obama’s multilateral instincts are admirable, but his apparent disinclination to take the lead is unrealistic in a world where our power dwarfs all others. There is no substitute for American leadership in providing command and control of the air campaign, in prosecuting the no-fly and no-drive zones, and in seeing Khadafy put permanently on the defensive.

Although Obama has done much to restore American credibility and purpose in the world, this has not been his finest hour. The indecisive and irresolute US behavior of the last two weeks on Libya led us to back grudgingly into this war. We did not give ourselves the time to think through the risks and to decide on a single, credible objective. We were pushed into it by the resolute and willful figures of French President Nicolas Sarkozy, British Prime Minister David Cameron, and, surprisingly and ironically, the Arab League.

This is hardly a good start to what will surely turn out to be a tough and demanding military intervention. Now that we are there, though, the United States and its partners will be judged on whether we succeed in saving the rebel army and helping it onto its feet for the battles ahead with the brutal Khadafy regime.

I doubted in weeks past whether a US military intervention in Libya made sense. We clearly have much more vital interests to protect in Yemen and Bahrain as the Middle East crisis unfolds. But, we are surely committed in Libya now and I can’t see how we get out until someone wins the civil war. We have no choice now but to lead in order to save Libya from its dictator and to redeem US power, credibility, and purpose in the Middle East.

Nicholas Burns, a former US Under Secretary of State, is a professor of diplomacy and international politics at the Harvard Kennedy School’s Belfer Center for Science and International Affairs, where he also directs the Future of Diplomacy Project.