Scott Brown could be the next Bill Weld 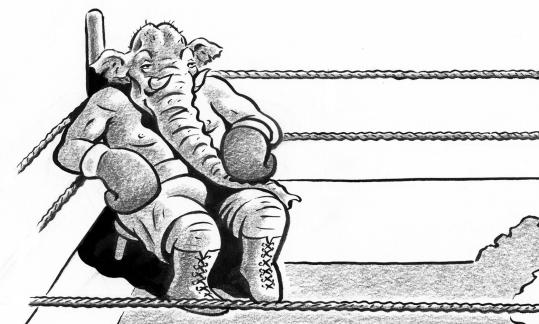 (David Gothard for The Boston Globe)
By Steve Kornacki March 19, 2011

WHEN SCOTT Brown became the first Massachusetts Republican since 1972 to win a Senate race last year, Democrats could take some solace in thinking that his victory was essentially a fluke.

Sure, with his regular-guy charisma, Brown had proven to be an unexpectedly marketable candidate, but his election was mainly the product of two factors that had nothing to do with him: a national political climate that made Bay State voters less resistant to the GOP label, and the ghastly deficiencies of his Democratic opponent, Martha Coakley.

Thus, Democrats could look toward 2012 — when the unexpired term Brown was elected to fill would be up — with relish: The political atmosphere would be different, Brown would be on the record voting with congressional Republicans on sensitive issues, and the Democratic nominee would (presumably) refrain from complaints about shaking hands. The fluke would be corrected.

But that’s not quite how things are playing out.

While Brown is generally a reliable Republican vote in the Senate, he’s bucked his party in enough high-profile instances to earn the scorn of the same Tea Party leaders who embraced him last year — scorn that has burnished his independent image and helped Brown outperform both Governor Deval Patrick and Senator John Kerry in polling. A survey released this week by the Western New England College Polling Institute showed Brown leading two potential Democratic foes — US Representative Michael Capuano and Elizabeth Warren, an adviser to President Obama — by healthy double-digit margins.

If it’s starting to feel like Brown will survive next year, we shouldn’t be that surprised. After all, this is how things played out the last time a Republican ended a long streak of futility for the GOP to claim a major statewide office.

Bill Weld’s election as governor in 1990 — the first time in 20 years the GOP had won the corner office — was just as easy to dismiss as a fluke, the product of an unusually restive electorate and a polarizing Democratic candidate, John Silber, whose cultural conservatism alienated key segments of his party’s base. When Weld narrowly defeated Silber by 75,000 votes, Democrats figured it wouldn’t be that hard to take him out in 1994: Just nominate a more traditional candidate capable of keeping the base together.

But while he governed as a doctrinaire conservative on some issues, Weld also found splashy ways to convince the state’s moderate-to-liberal swing voters that he shared their basic sensibilities.

For instance, in the earliest days of his gubernatorial campaign — when he’d been worried about defeating conservative state Representative Steven Pierce for the GOP nomination — Weld had communicated ambivalence about abortion and gay rights. But as governor, he happily picked fights with the right on both issues, well aware that the majority of Bay State voters would side with him over the Christian Coalition. He also endorsed an assault weapons ban, another break with national GOP orthodoxy.

In the early days of his governorship, some of the state’s biggest-name Democrats were touted as potential Weld challengers. But by 1993, they had reason to pause. Weld’s popularity was well over 50 percent (about where Brown’s is now) and the economy was showing signs of life. Trial heats showed him well ahead of most prospective opponents. For name-brand Democrats, the race was starting to look like a risk not worth taking. The nomination ultimately went to state Representative Mark Roosevelt.

The combination of Weld’s popularity, Roosevelt’s weakness, and the national climate (1994 was the year of the “Republican Revolution’’) made for the most lopsided gubernatorial election on record. In a state where barely more than 10 percent of the electorate is Republican, Weld, the man who owed his governorship to a fluke, was reelected with 71 percent of the vote.

Granted, even if everything goes perfectly for him, Brown won’t be getting anything close to 71 percent next year. The dynamics of gubernatorial and senatorial races are just different. Still, he’s been remarkably successful at separating himself from the least-popular elements of his national party. It’s something that the Democratic heavy-hitters will have to consider: Do they really want to risk their careers to run against someone who’s starting to look like the next Bill Weld?