To succeed, US must continue to invest in education, research 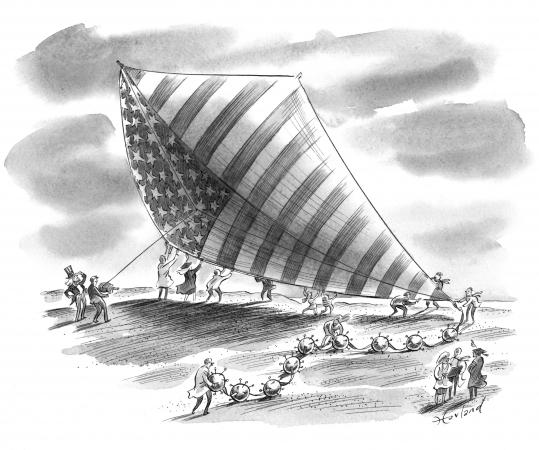 (Gary Hovland for The Boston Globe)
By Drew Faust and Susan Hockfield March 14, 2011

‘THE FIRST step in winning the future is encouraging American innovation,’’ President Obama said to a concerned nation in his State of the Union address. Our nation has a remarkable record of rising from the ashes of crisis, and education and research in science and engineering have often led those revivals of prosperity and morale. Of the world’s top 20 research universities, the United States claims 17. As leaders of two, we know our institutions must play a central role in helping America to rebuild.

The nation has suffered profound dislocations before — the Civil War, countless cycles of boom and bust including the Great Depression, two world wars, and the Cold War. The letters and documents of each period make clear that in every case, many felt that America’s time was up, and this bold experiment of a nation could not long endure. Yet in each case contemporary observers underestimated America’s capacity for self-renewal.

America’s current circumstances are certainly serious. But there is a proven path forward, one that the United States has traveled with great success before: the rising path of innovation. After the Civil War and World War II, in particular, America restored its economic momentum with great bursts of technological innovation, paired with ambitious national commitments to education.

Today, in that spirit, leaders across the political spectrum are proposing ways to foster innovation. As economist Robert Solow of MIT made clear, over the last 60 years, far more than half of America’s economic growth has sprung from technological innovation, much of it flowing from the laboratories of America’s research universities. Institutions still play this vital role, fueled by federal funding. For instance, Harvard’s stem cell scientists have produced functioning cardiac muscle cells and are devising new ways to restore damaged organs. MIT scientists and engineers are inventing new technologies for a clean energy future while educating the next generation of energy pioneers. And Harvard and MIT researchers are working together to redefine the prevention, diagnosis, and treatment of diseases from cancer to autism to AIDS.

Accelerating such innovation and bringing it to the marketplace will require commitment from both industry and government. According to a new report by Battelle, a science and technology development company, US public and private sources together still lead the world in research and development funding, at roughly a third of the total. But China, Korea, India, Russia, and Brazil are expanding their R&D commitments much faster than the United States or other traditional R&D leaders like Germany and Japan.

To accelerate the next innovation wave, the United States must invest ambitiously in basic and applied research.

Innovation requires innovators — and that demands an intense national focus on education. According to a recent study out of Harvard, Stanford and the University of Munich, Massachusetts’ fourth- and eighth-graders outperform those in every other US state in math.

Massachusetts didn’t hold this lead 10 years ago, but a decade of education reform raised the bar for teachers and set high standards for students. We should replicate progress like this across the United States now. And we must aim higher still, because while Massachusetts students may lead the nation, they lag their peers in 16 other countries. For millions of Americans, education has been an elevator of opportunity — and we must ensure that the next generation has the same opportunities, whether through traditional models of education or new online options.

Congress confronts a painful national budget deficit. But the United States also suffers from a national deficit of inspiration; we believe too little in our power to invent a better future to focus on priorities that will pay off not in the next quarter or even the next election cycle, but in the generations. History and science would both judge this pessimism a mistake.