Saving our young from ourselves 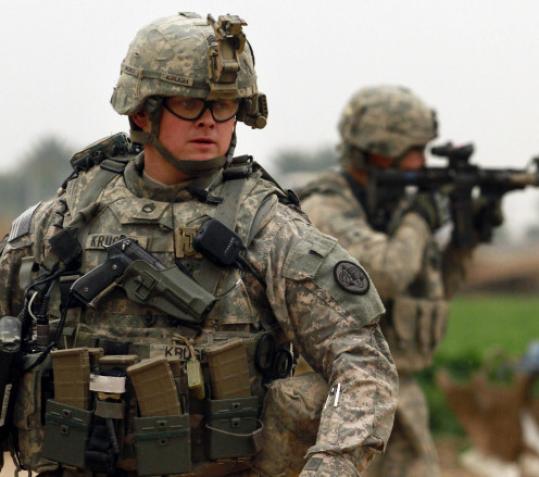 US Army troops on guard during a patrol 30 miles south of Baghdad last year. (Associated Press)
By James Carroll March 7, 2011

IN ADDRESSING the cadet corps at West Point last month, Secretary of Defense Robert M. Gates unknowingly plucked the mystic chords of the Abraham-Isaac story in Genesis. A father is prepared to sacrifice his beloved son, but at the last moment his knife-wielding hand is stayed by a God who desires no such offering. Gates is Abraham, the cadets are Isaac, but the staying voice now is not God’s, but history’s.

One pictures the dressed lines of gray tunics, bright young faces lifted to the white-haired Gates with utter trust. The secretary did not invoke the story of the nearly slain son, of course, but neither did he flinch from the gravity of his role. “I feel personally responsible for each and every one of you,’’ he solemnly told the cadets, “as if you were my own sons and daughters.’’

The speech was extraordinary, also, for its frank acknowledgment that America’s elders have consistently failed the nation’s sons and daughters in sending them off to war. “Since Vietnam, our record has been perfect. We have never once gotten it right — from the Mayaguez to Grenada, Panama, Somalia, the Balkans, Haiti, Kuwait, Iraq, and more.’’ Gates was faulting failures to anticipate the true nature of those engagements, but their outcomes arguably establish that all of them were unjustified. Young lives wasted.

More pointedly, Gates all but explicitly condemned the wars over which he himself presides today: “Any future defense secretary who advises the president to again send a big American land army into Asia or into the Middle East or Africa should ‘have his head examined,’ as General MacArthur so delicately put it.’’ But that reference makes the point. Since Korea, the national security establishment has consistently gotten it wrong. Why should elders be trusted now?

Outside the Bible, God does not miraculously intervene in world affairs. If fathers (and mothers) are to stop binding their trusting sons (and daughters) to the altar of unnecessary sacrifice, they must heed what post-Korea history teaches. Gates is honest enough to admit the failures of “the garrison mindset and the personnel bureaucracy’’ (although without noting his own role across the decades), but he does so in order to urge the cadets on to “an era of full-spectrum conflict.’’

But what if narrow spectrum is what’s called for — scaling back not just military adventures, but military dominance of US policy? The gray-haired leaders who made all those mistaken decisions over the last 60 years, consistently undervaluing diplomacy in favor of force, were drawing on institutional, ideological, economic, and political assumptions that remain firmly in place. The lock of the iron triangle — ravenous Pentagon, conscienceless defense industry, spineless Congress — has not been broken. The eternal immunity of defense funding in an era of savage budget cuts shows that. There is no reason to believe that the deep lessons of the present debacles in Iraq and Afghanistan are being learned, even if “force projection’’ shifts from “brigade combat teams’’ to drone pilots. Somebody’s children are ever on the altar.

Gates said that “the tendency of any big bureaucracy is to revert to business as usual at the first opportunity — and for the military that opportunity is, if not peacetime, then the unwinding of sustained combat.’’ The reform-minded secretary meant that as a warning about the unwinding ahead, but there should be no mistake: the real — and unmentioned — business as usual in this particular tradition is protecting the holy ethic that empowers the old to send the young out to die. Hello?

One can only be touched by the way Gates feels the burden of his role, and by how he carries the weight of the very history that might stay his sacrificing hand. But he presides at the altar of a ritual that has not changed across a century. A week before the British poet Wilfred Owen died on the Western Front in 1918, he wrote “The Parable of the Young Man and the Old.’’ The poem equates Abraham with all who preside at war, with an angel calling out to the likes of Robert Gates, whether from heaven or from history: “When Lo! An angel called him out of heaven, saying, ‘Lay not thy hand upon the lad. . .’ But the old man would not so, but slew his son — and half the seed of Europe, one by one.’’