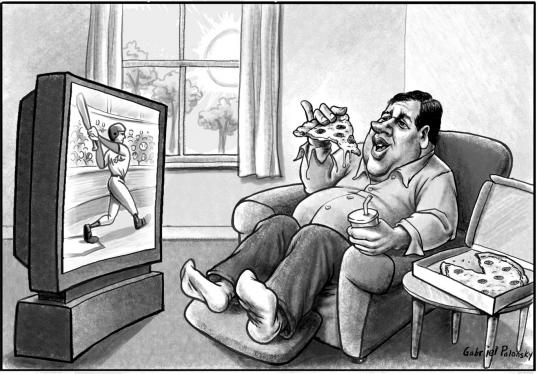 THE CURRENT standoff in Wisconsin has put tough-talking Governor Scott Walker in the headlines, but for sheer candor, no one holds a candle to New Jersey Governor Chris Christie. For the past year in town hall meetings, interviews, and speeches, Christie has been cheerfully, relentlessly, and brutally honest. People appear to love it. His approval/disapproval rating now stands at 52/37 in a state where Democrats outnumber Christie’s fellow Republicans by 700,000. Yet imitators remain few and far between.

During Christie’s campaign in 2009, CNN reporters tried to create an awkward moment by asking him about his weight. He earnestly replied, “I’ve had a weight problem for 30 years, so what?’’ When they pushed him to criticize President Obama’s visit to New Jersey, he simply noted that, “it’s always an honor to be visited by the president of the United States.’’ Clearly, the sincerity of these responses confused the pundits at CNN.

At a town hall meeting when a public school teacher suggested that she was worth up to $80,000 per year, Christie made two observations: first, New Jersey, unlike the federal government, cannot print money; and second, she didn’t have to teach if she didn’t want to. There was no pandering rhetoric about our children, our future, or our values — just simple, honest truth.

About Social Security, Christie says, “We’re going to have to raise the retirement age.’’ He refers to high-speed rail, electric cars, and universal broadband access as “the candy of American politics,’’ which we simply cannot afford until we deal with our budget crisis. And when confronted with a possible government shutdown in New Jersey, he announced that if it happens, “I’m going to order a pizza and watch the Mets.’’

This type of candor is exceedingly rare. No one, least of all a politician, enjoys telling someone “no we can’t.’’ Instead, most people instinctively respond to questions in the most positive way possible, and running for office only makes the problem worse. Beyond this desire to appease lies the fact that confrontation also takes more work. Refuting someone else’s argument or point of view requires facts, reasoning, and analysis. By contrast, nodding in sympathetic agreement saves time and energy, and eliminates the need to think.

Last week’s release of a Government Accountability Office report on duplication and overlap in government shows what happens when you try to please all of the people all of the time. We end up with 56 financial literacy programs spread over 20 federal agencies, 80 economic development programs in four departments, and 82 programs for teacher quality — as much as $100 billion spent without any way of measuring the outcome or benefits. The only real antidote to such out-of-control bureaucracy is toughness, oversight, and attention to detail — and the ability to say “no.’’

Christie says he’s not running for president, and given the consistency of his first year in office, you would be a fool not to take him at his word. But with the federal budget awash in red ink, the timing looks right for a national leader cut from the same cloth. Speaking with CBS’s Bob Schieffer last week, Christie again denied national aspirations while offering advice for would-be candidates: “You have to have unscripted moments. [Americans] want unguarded moments — that’s when they can really judge your character.’’ It was a valuable suggestion from the man who has had more unscripted moments than any other American politician during the past year.

In fact, the history of the New Hampshire primary favors the blunt. Ronald Reagan and John McCain thrived on the retail politics of the Granite State, where a candidate can be asked any question, by any voter, at any moment. In the same vein, both Jimmy Carter and Bill Clinton were viewed as plainspoken outsiders when they made a name for themselves in New Hampshire on the way to the White House. All of these candidates were comfortable in the unpredictable, unscripted moments of the campaign, and earned a reputation for candor. They were willing to give voters an unvarnished look at themselves, and reveal their character in the process.

Do Americans really want brutal honesty in a president today? Perhaps Reagan best carried the “tough love’’ approach into office. He fired the air traffic controllers, cut domestic spending, reformed the tax code, and, in 1983, signed the last major overhaul of Social Security. Last month, a Pew poll identified Reagan as the most respected president of the 20th century. It may be difficult to emulate, but it appears to be a recipe for success.

Meanwhile back in Washington, Harry Reid refuses to even discuss Social Security as part of budget negotiations. On the national scene, Republican presidential contenders are spending an awful lot of time selling books and producing TV shows. We’ve seen a lot of tough talk during the past few weeks, but frankly, most of it feels scripted. Even more to the point, the idea of ordering pizza and watching the Mets during a government shutdown seems to be the last thing on anyone’s mind.