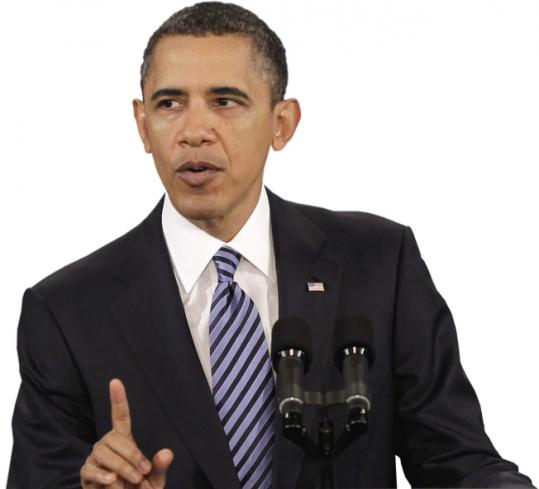 PRESIDENT OBAMA tried to play nice guy yesterday in a visit to the US Chamber of Commerce. He promised to remove “a burdensome tax code with one of the highest rates in the world.’’ He promised to remove “outdated and unnecessary regulations.’’ He said, “I will go anywhere anytime to be a booster for American businesses, American workers, and American products.’’

Obama also attempted to wring moral responsibility out of a group that opposes his health care bill, environmental protections, Wall Street reforms, and consumer protections. He said that if his administration lowered taxes and increased exports to help businesses compete, the result cannot merely be profits and bonuses for “those at the top.’’ He fell back on President Kennedy’s “a rising tide lifts all boats’’ to remind the Chamber that the economic growth just before the recession left too many boats “stuck in the mud.’’

But Obama did not say how he might hold industry accountable to lift those boats out of the mud. It is questionable whether he is interested in doing so at all. As he was making nice, his minions were warning about mean days ahead for the poor.

In a guest op-ed Sunday in the New York Times, Jacob Lew, director of the White House Office of Management and Budget, outlined cuts coming in domestic programs. He said Obama will cut community service block grants in half to save $350 million, even while admitting the grants supported “grassroots groups in poor communities, dedicated to empowering those living there.’’ The cleanup and protection of the Great Lakes would be slashed by a quarter, or $125 million. Community block grants to help cities finance housing, infrastructure, and economic development in low- and moderate-income neighborhoods would take a 7.5 percent hit, worth $300 million.

“These three examples alone, of course, represent only a small fraction of the scores of cuts the president had to choose, but they reflect the tough calls he had to make,’’ Lew wrote. “And as he made them, his administration tried to make sure that there was no undue burden on any one program or area.’’

Really? The poor and the environment are being asked to take on yet more burdens in Obama’s grand plan to reduce the deficit by more than $400 billion over the next decade. Obama is cajoling industry to make sure that future economic growth does not benefit just the executives. But it is difficult to have faith in the outcome when Obama and the Democrats capitulated so grandly on their pledge to end tax cuts for the richest Americans. They said they had to do that as a compromise to get the Republicans to agree to extend unemployment benefits. But in that compromise, the White House and Congress threw away far more than what they are now seeking to cut.

According to the Urban Institute, the tax cuts to just the top 2 or 3 percent of income earners in the United States will cost the American economy $700 billion over the next decade if made permanent. Reams of studies have found that tax cuts do not produce jobs.

Meanwhile, as Lew goes around talking about painful cuts to grassroots organizations, big business is occupying a bigger place in the Obama White House. New chief of staff William Daley was a executive who helped the Chamber fight financial regulation. Jeff Immelt, Obama’s new leader of a jobs council, is the CEO of , which has had countless run-ins with the Environmental Protection Agency.

Obama needs to be completely clear on why he is making nice to the Chamber of Commerce. He also needs to make sure he doesn’t abandon the poor or the environment in the process.