A word with Kennedy

Vicki reflects on the Senate, life without Ted, and her excitement for the Senate Institute 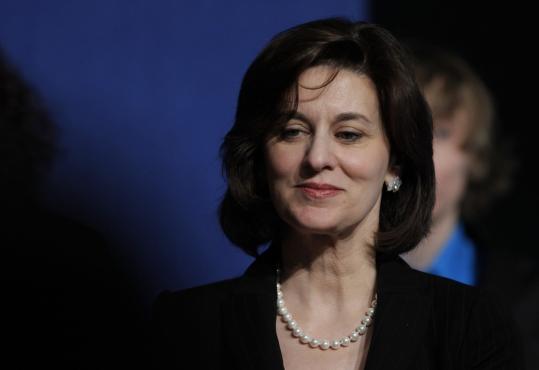 VICKI KENNEDY has a message for all those hoping she’ll run for the US Senate.

A sincere thanks, but no thanks. It’s just not going to happen.

“There’s no elective office for me,’’ Kennedy said.

Although she has said all along she isn’t interested in seeking the seat her late husband long held, the speculation and the cajoling have continued. Now, with Democrats starting to look in earnest for a compelling candidate to challenge Republican US Senator Scott Brown, Kennedy says that though she’s flattered by the sentiments, there’s no chance she’ll change her mind.

“There will not be a yes,’’ she said in an interview this week. “The Senate is not where I see my future.’’

Why not? “I can’t imagine running for elective office without Teddy at my side, and that really is what it all comes down to,’’ she said. “I hope people respect that.’’

Did Ted urge her to run? “We had more than one discussion about it,’’ she said, before amending her comment slightly. “Discussion is probably too long of a word. He raised it with me a few times, before he got sick and after he got sick, and every time I said, ‘You’re Senator Kennedy, and that’s it.’ ’’

That hardly means she’ll fade away. She’s been busy helping conceptualize the new Edward M. Kennedy Institute for the United States Senate, and with ground-breaking planned for early April, she’s brimming with excitement about the plans.

The institute, which will be built next to the Kennedy Library, will be a dynamic, state-of-the-interactive-art educational facility, she says. “It is going to be a place like none other in the world, an incredible resource for Boston, for Massachusetts, for our country,’’ Kennedy enthuses.

Back to politics. Does she think she could have beaten Brown, who last year captured the seat Ted Kennedy held for almost 47 years? Kennedy won’t take the bait. Asked if she and Brown have been in contact, Kennedy says they have spoken a number of times and “he has been very gracious to me, always.’’

Brown may be even more gracious now. With the Democrats’ two strongest potential challengers — she and Governor Patrick — having both now said they won’t run, the party is left contemplating the possible or probable candidacies of distinctly lesser lights. That group includes already-rans like Michael Capuano and Alan Khazei, almost-rans like Steve Lynch, and accomplished-but-uncharismatic want-to-runs like Bob Pozen. Plus there’s some chatter lately about Lieutenant Governor Tim Murray and Newton Mayor Setti Warren.

But what of the others in the Kennedy corral? Should hot-headed, dim-witted Joe Kennedy II run?

“Oh, stop, stop,’’ she said, protesting that description of the Kennedy clan’s eternal Hamlet. (OK, OK, somewhat hot-headed, sometimes dim-witted.) “Joe is wonderful and he’s talented and he’s great. I think Joe can do whatever he chooses to do.’’

Count me a pronounced skeptic on several of those points, but onward. How about Ted Junior, who impressed many with his eulogy for his father, but who would have to parachute in from Connecticut? “I think, again, that Teddy is a great talent,’’ she said. “I think the sky is the limit.’’ That’s as much as she’ll say. Other well-positioned political observers, however, consider a candidacy by either unlikely.

One thing that’s quickly apparent in talking to her is that Mrs. Kennedy is still very much grieving for her late husband, who died in August of 2009.

“These holidays were harder than the first,’’ she said. “I think anybody who has been through the loss of someone they love very much understands that it’s a journey. In a lot of ways, I’m still finding my way.’’

She has put their home in Washington on the market because “it’s hard to be in the house’’ now. Nor is she spending time in Hyannis Port. “The Cape is too difficult for me,’’ she said simply.

But she’s positively animated when talking about her hopes for the Kennedy Institute. Visitors will be treated to a replica of the Senate, with each desk featuring a touch-screen with the biography and record of each senator who occupied it, she says. The institute will hold forums on the matters of the day and offer presentations about relevant historical periods or issues. The programming will let visitors play the part of senators confronting the great historical issues. The institute will also produce original historical research and provide computer workstations for independent delving.

“It bears Teddy’s name, but it really isn’t about Teddy,’’ she said. “It’s about the United States Senate, it’s about our system of government.’’

Although Vicki Kennedy is emphatic that the real Senate doesn’t beckon, the Senate Institute is a place where she’s obviously eager to serve.