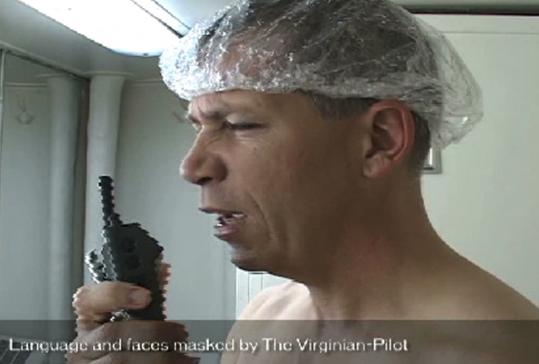 In a frame grab, US Navy Captain Owen Honors appears in one of the profanity-laced sketches. (The Virginian-Pilot via Associated Press)
By Derrick Z. Jackson Globe Columnist / January 4, 2011

JUST WHEN Massachusetts Congresswoman Niki Tsongas should be savoring her new legislation to stem sexual assault in the military along comes news of retrograde attitudes still coddled by the armed forces. A Virginian-Pilot newspaper report over the weekend described raunchy “movie night’’ videos featuring the captain of the USS Enterprise, Owen Honors. The videos were shot and edited with taxpayer-funded equipment in 2006 and 2007, when Honors was the ship’s second-in-command. They were shown to the 6,000-member crew on closed-circuit television.

The videos are easy to and one look at them makes you wonder not only about sexual attitudes at the highest levels of command, but how the Navy let such an infantile man command the world’s first nuclear-powered aircraft carrier, a ship that is about to be deployed to Afghanistan.

The videos were shot during previous deployments to Iraq and Afghanistan, with some of the footage showing Honors narrating before the flags of both the United States and the US Navy. The skits, which were spoofs of ship cleanliness, water conservation, and other ship maintenance and behavior issues, included gay slurs, same-sex sailors pretending to shower together, gross toilet scenes, and simulations of masturbation, animal sex, and a rectal exam. Naval spokesman Chris Sims told the Washington Post, “Production of videos, like the ones produced four to five years ago on USS Enterprise and now being written about in the Virginian-Pilot, were not acceptable then and are not acceptable in today’s Navy. The Navy does not endorse or condone these actions.’’

The Navy says it will investigate the production of the videos. However, according to the Virginian-Pilot, offended female sailors complained when the videos were originally aired but said they were ignored.

Honors used his videos to bully complainers by saying on screen: “Why don’t you just go ahead and hug yourselves for the next 20 minutes or so, because there’s a really good chance you’re gonna be offended.’’

Clearly offended was Tsongas, who worked hard for new measures passed by the last Congress to dramatically improve the reporting and documenting of sexual assault cases and making legal counsel available to victims. The Pentagon says there were 3,230 reports of sexual assault involving members of the armed forces in fiscal year 2009, an 11 percent increase from 2008. In a new task force report, the military said it had 41 reports of sexual assault in its academies but estimates that number may represent fewer than 10 percent of actual unwanted sexual contact.

“Just from reading the accounts [of the Honors videos], we have to remember the critical role commanders play,’’ Tsongas said in a telephone interview yesterday. “When you have a captain essentially signaling that kind of behavior is OK, that makes all the training programs in the world go down the drain. That is one of the things that is so important, to embed in the culture and up the chain of command constancy around these issues.’’

The best training program the Navy can offer right now is to take Honors off the Enterprise. It would be a consistent way of bringing in 2011 after a 2010 that saw Rear Admiral Nora Tyson become the first woman to take command of a carrier strike group, the welcoming of women into submarine school, and women sweeping the Navy’s Sailor of the Year awards. That progress came as Congress, on a parallel track of equality, finally ended the ban on openly gay soldiers.

The Navy also talked a good game against sexual assault in 2010. Just last week in his year-end message to the fleet, Master Chief Petty Officer Rick West said, “Shipmates should be looking out for shipmates and getting involved when you see someone steer into danger . . . We must continue to promote a positive command climate.’’ The Navy can promote that climate with a swift investigation and, likely, a swift demotion of Honors, who single-handedly was steering the Navy into reverse.