A union leader makes a breakthrough 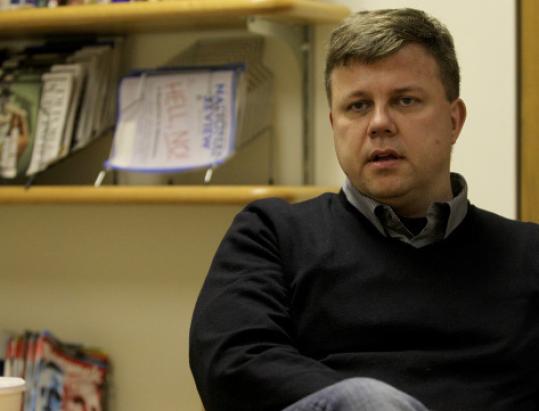 PAUL TONER isn’t the most popular guy in class. The 44-year-old president of the state’s largest teachers’ union — the Massachusetts Teachers Association — angered many of his own members with a recent proposal to use student performance on the state MCAS exam as one of several measures to evaluate teachers. It’s a nuanced idea. But it landed like a bomb in education circles, where teachers already feel blamed by education policy makers for failing to raise student achievement, especially in the most troubled districts.

Toner is part of a small but growing group of union leaders around the country who are willing to set aside rigid beliefs around collective bargaining in the interest of educational quality and better working relationships with school administrators. That’s enough to prompt letters to the editor calling for his resignation and blog posts accusing him of collaborating with the enemy.

Yet in diverging from the traditional approach, Toner is showing that there’s a way past the stultifying standoff between teachers unions and education reformers. It’s a major breakthrough.

Toner, who served for five years as president of the Cambridge teachers union, takes any criticism in stride. That comes from growing up as the oldest of four boys in a working class family in Somerville and North Cambridge. At 15, he lost his father. Later, Toner vacillated between teaching and law. So he taught middle school by day and attended Suffolk Law at night. He comes across as temperate, but tough to intimidate.

“If people read, listen, and think about what we’re proposing,’’ he said, “they’ll see it’s a good model.’’

Teacher evaluation is the thorniest issue in contract talks across the state. Most union leaders argue that poverty and related social ills — not poor teaching practices — are at the heart of low-performing classrooms. So why should their members agree to link student scores on standardized tests to teacher evaluations, promotions, or pay raises? The Obama administration, however, is demanding that states do just that or forgo Race to the Top education funds. Meanwhile, the clock is ticking. At the end of January, a state task force is expected to release its draft recommendations on teacher evaluations.

Toner and the MTA board propose using growth trends in standardized tests, including MCAS, as one of several ways to validate supervisors’ observations of teaching ability. The union knows that failed lesson plans, followed by bad student outcomes on standardized tests, portfolios, or end-of-year exams, spell trouble. Under the plan, teachers with unsatisfactory ratings would be given a year to improve before dismissal or demotion. Teachers with exemplary ratings could earn raises for becoming instructional coaches. And principals would be given leeway to spend less time and effort evaluating top teachers in order to focus more attention on new teachers and veterans who need improvement. The plan also requires that evaluators have at least five years experience in the classroom. Toner doesn’t want inexperienced administrators ruining teachers’ careers.

It’s not a perfect plan. No parent, for example, relishes the thought of their child spending a year with an incompetent teacher who may be irredeemable. But the overall effort is already drawing national attention from education reformers for its boldness and flexibility.

Normally, a long-serving vice president of the union — in this case, Toner — would have assumed the presidency of the MTA uncontested. But delegates at the MTA’s annual meeting last May found themselves in the middle of a heated race between Toner and Paul Phillips, the fiery president of the Quincy teacher’s union. The contrast was sharp. Toner cited the upheavals in education policy “all around us,’’ urging members to take risks to close the achievement gap and “lead the conversation for positive change in order to improve our schools and support our students.’’ Phillips, who had led an illegal strike of Quincy teachers in 2007, barely mentioned students in his platform paper. He derided the use of test scores in teacher evaluations and invoked a future in which the union’s “basic right to bargain’’ would come under attack from those seeking to introduce merit pay and force changes in health and pension benefits.

Essentially, it came down to a choice between Toner’s vision of a professional association and Phillip’s vision of a bare-knuckles union. And Toner prevailed with 63 percent of the vote.

Some state education officials may demand even tighter links between student performance and teacher evaluations. Some union officials from the more than 300 locals represented by the MTA may make outrageous salary demands just to consider this or a similar proposal. There’s plenty of ways for this to fall apart. But Toner and the MTA gained enormous standing in the upcoming debate over teacher evaluations by speaking up for their profession, and not just their jobs.